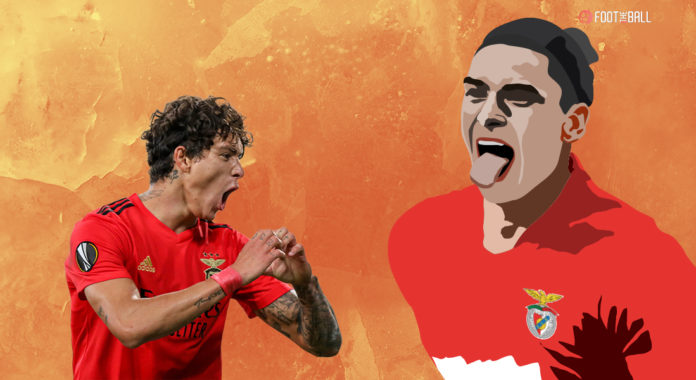 Liverpool may have lost the chance to win the Premier League and the Champions League by a fine margin. Still, they have made intentions clear for this season after expressing their interest in signing SL Benfica’s Darwin Nunez who has been one of the best young players. The Uruguayan was the best attacker in the Portuguese Primeira Liga, ending up as the top scorer with 26 goals.

Liverpool have already agreed on personal terms with the player and are now negotiating with Nunez’s club. According to reports, Liverpool have prepared an agreement worth €100 million. This included an €80 million payment plus add-ons,

The Reds already have made a brilliant signing from the Primeira Liga in Luis Diaz. The Colombian, who was among the best young attackers in Europe with Nunez, has impressed massively since moving to Merseyside in January.

While Manchester United are also said to be in touch with the player, it seems likely that the 22-year-old will join Jurgen Klopp’s men.

Liverpool are also looking to reinforce the attacking department after it became clear that Sadio Mane was leaving the club. And the club believes he is the perfect replacement for the departing Senegalese.

What does he bring to Liverpool?

Darwin Nunez was the top scorer in the league, which means he will add a new threat to the already brilliant Liverpool attack. While Liverpool scored 94 goals in the league, second only to Pep Guardiola’s Manchester City, they struggled to find the back of the net on critical occasions.

Klopp’s men lost two matches in the league, the best record but drew eight games, two more than City, ultimately deciding who won the trophy. Even in the Champions League final, Liverpool struggled due to the same thing. With Roberto Firmino and Diogo Jota not in form, the one-time quadruple chasers failed to find an elite attacker who could come from the bench and score.

And in Nunez, they will have a player who is in form, is developing and has the best years ahead of him.

Darwin_Núñez stats for 2021-22 season. The striker is in hot demand. Top target for both Liverpool and Manchester United. pic.twitter.com/eRwEL3UFWk

We also must understand that Nunez played in a Benfica side that massively underperformed in the league. The 2018-19 league champions finished third in the club finishing 17 points behind FC Porto.

Despite this, Soccerment rated Nunez as the best player in the league. If he can be this devastating in Benfica, he will surely be a more dangerous player in the Liverpool system.

How does Darwin Nunez fit into Liverpool?

He has the top stats when it comes to scoring goals. According to fbref, the forward scored 0.88 goals per 90 minutes in the last year, among the top three per cent strikers.

And it is one of the main reasons Liverpool want to sign him. Jurgen Klopp has the best creators in his team. Players who can unlock even the tightest defence with an amazing through ball or dribbling and create chances. The team wants a player who can get on the end of these chances and score. Unlike Mohamed Salah and Luis Diaz, who are creators and goalscorers, Nunez leans more on the goalscoring side.

Jurgen Klopp will never sign a player that he doesn’t feel will:
1. Suit the culture
2. Suit the playing style
3. Improve the chemistry

In Darwin Nunez they are getting a player from a club @slbenfica_en with a strong culture. I was most impressed by this last time I was there. pic.twitter.com/TmUCtgwJNs

The youngster also loves to dribble, and it is here that we come across an interesting observation. He attempts 2.93 dribbles per 90 minutes, a good number for forwards. However, he dribbles past 1.91 players per 90 minutes, putting him among the top nine per cent of attackers.

He is also an elite ball carrier. Fbref data shows that he completes 2.2 carries per 90 minutes, which is better than Lionel Messi (1.23) and just shy of Mohamed Salah (2.27).

He is also good at crossing the ball, with 2.49 crosses attempted per 90 minutes, good enough for the top three per cent of forwards.

In case you missed it: Paul Pogba documentary: Everything you need to know

While Nunez is an exciting player that will only get better under Jurgen Klopp, he does come with his flaws. According to Soccerment, his pass success ratio during buildup play is 67.1 per cent; a number Klopp would want to improve. Nunez is also not at his best when it comes to passing. At Benfica, he was the leading man, scoring goals, so his passing accuracy was not a big concern.

However, that will not be the case at Liverpool, which boasts an array of goal scorers. His pressure numbers are pretty underwhelming, especially in the attacking third. This might become his biggest weakness as Liverpool are a team that play Gegenpressing, a system that demands the entire squad to press the opponents relentlessly.

🇺🇾 Linked to Liverpool, Man United & more this summer, who should splash the cash on Benfica star Darwin Nunez?

The goal record speaks for itself, but there are concerns about his all-round play 🤔

Nunez will also be making his move to a more physical league. The difference in play between the Portuguese league and Premier League is massive. The league is faster, direct and physical, which will be a considerable challenge for the player.

And lastly, he is going to a team that is among the favourites to win every competition they participate in before it even begins. And there is no room for complacency. Jurgen Klopp is also a manager that demands the maximum out of a player. Hence the reason he wants every player to learn the Liverpool system. This could mean he could make few appearances at the start of the season, as was the case with Fabinho and Andy Robertson.

Check this out: What is a Raumdeuter?

Well, this is the question that is on everyone’s mind. Sadio Mane has been a loyal servant for the club for years but is now looking for a new challenge. Hence, Klopp must reinforce his side. With Mane gone, Liverpool will be down to four elite attackers (Salah, Firmino, Diaz and Diogo Jota). Furthermore, cult hero Divock Origi has already left the club, and Takumi Minamino does not offer the same attacking threat, making another signing a must.

And Nunez offers the same quality as Mane. Both are supreme goal scorers and can be good enough in chance creation. The duo use pace and dribbling to get past defenders. In addition, they are supreme readers of the game. They can both check their runs and move at the perfect time to beat the offside trap.

According to Soccerment, their duel success ratio is 44.3 per cent. Admittedly, Nunez is a far better accurate shooter than Mane, but with the quality of the Premier League, we can expect that the number will drop.

Darwin Nunez would be an exciting replacement for Sadio Mane at Liverpool. Quick , dangerous , good in air , likes to attack from wide left. Also freshens up squad , which is important.

Most importantly, in the Portuguese League, Nunez mainly played on the left-wing and terrorised the right-back, which is the same role that Mane plays.

Jurgen Klopp told Liverpool fans to book tickets for the 2022-23 Champions League final at the Atatürk Olympic Stadium in Istanbul, Turkey, cause they will be back. The last time Liverpool came to Istanbul, football witnessed a historic night, and maybe Darwin Nunez could help Liverpool recreate it.