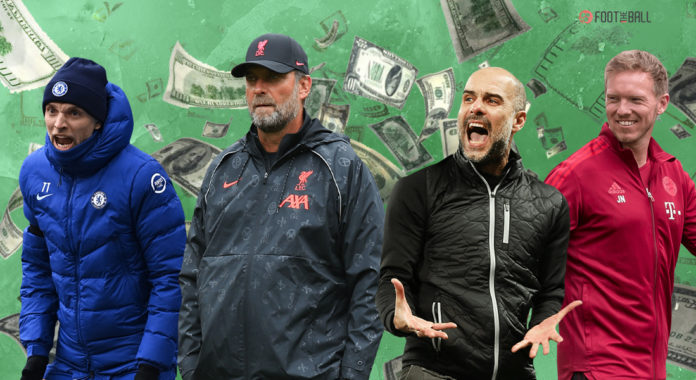 The 2021 summer transfer window had gone down in history as one of the best and most astounding transfer windows of all time. From stunning purchases to swirling rumours, transfer spending records and the accompanying frenzy, it had everything. The football world never stood still across the entirety of the two months of the window.

The backdrop of the pandemic meant there was a belief that clubs would be cautious in their spending. But that didn’t stop a few clubs from sending transfer records tumbling.

The total expenditure across Europe’s top five leagues in last year’s transfer window was rumoured to have totalled an astronomical £3 billion in what was arguably the wildest, most captivating summer transfer window ever. Things are going to be ramped up to another level this time. COVID era has started to pass and the market is hot as to who will spend the most this summer. With that comes the exciting possibility of predicting where the biggest stars will end up. Get in on the action with a free ladbrokes bonus code if you think you know where the next big superstar is going to land. Are PSG going to go crazy again? What about Manchester City’s chase for UCL glory?

Here are the top teams that will be looking to spend the most this summer transfer in search of glory.

Has now joined @PSG_English as a club advisor

But who is Luis Campos? Tap to know all about the Portuguese! #LuisCampos #PSG https://t.co/hFcWI4VJOf

Bayern Munich just won their 10th successive Bundesliga title, but they failed miserably in the Champions League. The Bavarians were shocked by Villarreal in the quarterfinals and will now be looking to make some changes ahead of the 2022-23 campaign where their eyes will be set on capturing European glory.

However, things aren’t all sweet at the club. Robert Lewandowski wanted a new three-year deal but due to Bayern’s rules with players over 30, they weren’t willing to give him an extension of that stature. The Pole, who is arguably the most clinical finisher in Europe, is now keen on leaving Munich for Barcelona.

That’s certainly concerning and Bayern is hoping to figure out the situation sooner rather than later.

📺@primevideosport know their game when it comes to documentaries🙌

The latest series on All or Nothing: @Arsenal could be their best yet🤩

If it was not for Jürgen Klopp, things may not have panned out the way they have so far under him at Liverpool. Had Klopp not bet on a lanky Polish striker from Lech Poznan and transformed him into one of the best forwards in the world, Bayern Munich may never have had to replace him with Sadio Mané.

But it does no good to dwell on the past, and Klopp will feel a sense of pride for his former protégé who could be on the brink of a move to Barcelona during the twilight years of his career.

But while, Lewandowski is on his way to Barcelona, Klopp could emulate his iconic transfer this summer with a player of similar ilk to the Polish forward – Darwin Nunez.

With his long hair tucked under a slick hair band and boyish look, it’s easy to make comparisons to Liverpool’s most endearing number nine in the 21st century in Fernando Torres. But the make-up of Darwin Núñez could also be compared to one of Klopp’s greatest creations in Lewandowski.

Many people believe that Liverpool are the biggest threat to Pep Guardiola and Manchester City’s status as English champions this season, with Jurgen Klopp’s Reds having pipped them to the title in 2019/20.

Unlike their title rivals City and Chelsea, though, Liverpool have been a lot less active in recent transfer windows, but could look to the market this winter to strengthen their squad for the title run-in, with a possible Champions League run also needing to be managed.

Unlike a number of clubs on this list, Chelsea had spent the entirety of their transfer budget on a single player last window. Following a season that underlined their need for a proven goalscorer, the Stamford Bridge side went out and bought one of the best in the business in Inter striker Romelu Lukaku – only for that move to not work out.

The Belgian is now said to look for pastures new as Thomas Tuchel looks for a major rebuild at Stamford Bridge.

Chelsea have looked at several signings ahead of the summer as they prepare for their first transfer window under the ownership of Todd Boehly’s consortium, after the Blues’ sale to the American from Roman Abramovich.

After Tuchel’s men finished third in the Premier League table, they have a long way to go to close the gap to Manchester City and Liverpool. It was previously reported that Thomas Tuchel is planning a midfield overhaul this summer, with both Jorginho and N’Golo Kante out of contract in 2023.

With Antonio Rudiger and Andreas Christensen both departing in the summer, Chelsea fan around the globe can expect this summer to be a busy one for their team.

After securing a fourth Premier League title in five seasons, Manchester City have already secured the services of Borussia Dortmund striker, Erling Haaland, who joins the club on July 1st.

The clinical Norweigan concludes the long-winded search for Sergio Agüero’s successor, with Haaland – alongside Julian Alvarez – expected to add even more firepower to a frontline that scored 99 goals in the Premier League last season.

But even after such astute additions, club chairman Khaldoon Al Mubarak excited supporters earlier this week when he revealed more signings are expected to walk through the Etihad Stadium doors this summer.

“I can confirm that there will be more players coming in (to Manchester City this summer). We are looking to strengthen the team in the areas that need strengthening,” Al Mubarak said.

After Haaland and Alvarez, City have been linked with Leeds United’s Kalvin Phillips to fill the vacant defensive midfield position left by club captain Fernandinho.

And given that they are already the dominant team in England, Khaldoon’s statement is a worry for their rivals around the world.

The French giants had turned the 2021 summer transfer window on its head by signing some of the best footballers in the world. PSG’s signings give them the look of some dream team at that moment. Le Parisien were coming from a chastening season where they conceded the Ligue 1 title to Lille.

Although all those signings were a dream on paper, football is NEVER played on paper. The French outfit were disappointing the entire season. They had a league title to show for themselves, achieving that in a walk-in-the-park fashion, but apart from that, they were abysmal in the Champions League.

This summer, with Mauricio Pochettino already on his way out and a new club advisor in the form of Luis Campos, the club are headed in the right direction. The Portuguese is the right man to lead PSG in terms of transfers, with the now club advisor proving to be a masterstroke, having already done innovative and smart business for Lille and Monaco.

These clubs might be the ones who are on the front foot this summer transfer window of 2022, but it’s not to say that the other clubs will have a silent one. The likes of Manchester United, Juventus, and Dortmund will look to add more depth and strength to their squads themselves. But with the superior financial power, these top five clubs have with them, its easier to predict a successful transfer window for each of them.