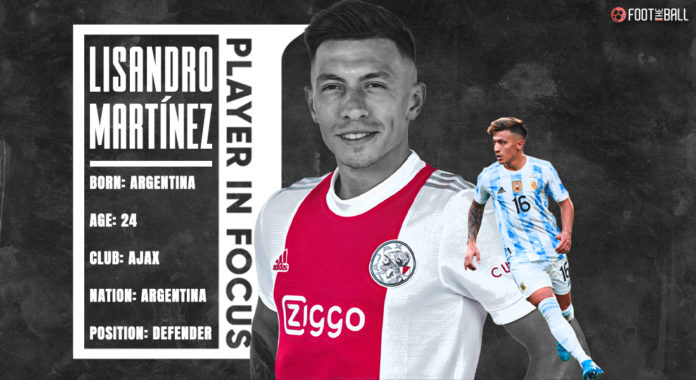 In the summer of 2019, Ajax were in a dilemma. The club had just won their 34th Eredivisie and just missed out on the Champions League final. Ajax had produced a special team stacked with young talent. And now, these players were on the radar of other clubs. Now the club had two options to choose from:

They took the second option and produced another golden generation within two years. Lisandro Martínez is one of the players to come out of this process.

The 24-year-old, who started his career at Lionel Messi’s youth club Newell’s Old Boys, has been one of the top defenders in the Eredivisie. Brought for only €7 million from Defensa y Justicia, the defender has proved that he was worth every penny.

In three years, Martinez has won three trophies with Ajax and Copa America and the Finalissima with Argentina. He has formed a brilliant partnership at the club with Jurrien Timber, making Erik Ten Hag’s side a powerhouse. Now Ajax face the same dilemma as in 2019, with clubs circling Martinez.

Lisandro Martinez’s analysis shows us that he plays more with his mind than his feet. Standing at 5 feet 10 inches, the 24-year-old is not the most daunting defender, but his excellent reading of the game ensures he is not the easiest person to deal with. The Argentine is also adept at ball playing. Erik Ten Hag preferred him because he can move the ball forward with his exquisite short and long passing.

His vision ensures that he is rarely caught off guard. He also makes tackles only when necessary, choosing to stay on his feet and snuffing out the danger. Martinez is also a player who goes quietly about his job. Rather than going for a tackle, he waits to intercept the passing lanes to snuff out the danger.

Lisandro Martinez’s performance as a defensive midfielder against Chelsea in the Champions League a few years ago speaks volumes of his quality. So clean and composed for a defender. Very rare technical qualities for a CB. Brilliant. pic.twitter.com/rLRWiDibDo

His passing accuracy for the last three seasons has been over 88 per cent, which shows his absolute control of the ball. He can also create chances for his team, as is evident by his three assists, the third-best for a centre-back in the league.

Martinez is not only a good reader of the game but can also make split-second decisions if the need arises.

This playing style of Lisandro Martinez is accurately reflected in his stats.

‘All or Nothing: Argentina’ – All you need to know

Lisandro Martinez’s analysis makes one thing clear. He is an elite passer. Fbref has ranked him among the top one per cent defenders on successful passes, progressive passes, assists, key passes, and passes into the final third.

This is an impressive stat, and with more teams requiring to build up from the back, ball-playing defenders are now worth their weight in gold.

Martinez is also a creative defender. The Argentine completed 1.38 Shot Creating Actions (SCA) per 90 minutes, among the top one per cent of defenders. The same holds for Goal Creating Actions (GCA), and dribblers tackled and dribbles contested. Martinez is also ranked as the tenth-best player in Expected Threats (xT). The xT metric measures how threatening a player is in different parts of the pitch. And despite being a defender, Martinez has better xT than his Ajax teammate Antony and Bruma and is shy of Ryan Gravenberch and Cody Gakpo.

Martinez is also quite efficient at what he does. According to Soccerment, the player has made 46 interceptions, the 34th best in the league. His tackle numbers are more average. However, Soccerment rated him as the second-best defender in the league behind Timber.

This is because Martinez snuffs out the danger before it even begins through his impeccable vision and reading of the game.

Martinez completed the sixth-most passes (1963) in the Eredivisie and has been reasonably accurate with it, which has attracted the interests of clubs all over Europe. In addition, he has also played in a system that encourages ball-playing defenders. Thus, he can seamlessly transition into any top side, which usually start their play from the back.

He also has the experience of playing in the Champions League. In fact, he was a part of a defence that allowed the third least goals in the group stage. So this has brought him tremendous experience that will be helpful for him in the future.

🥇| Lisandro Martínez has been named the Ajax Player of the Season! He played 37 matches this season. If you look at the stats, totally deserved award:

He has also seen success on the international stage with two trophies. Therefore, any club signing Martinez would get a good defender and a player who can also raise the game of his teammates as well.

After three seasons at Ajax, it looks likely that Martinez will leave the club. And it is the Premier League clubs who are after the Argentine. Manchester United are looking to make him the first signing under Erik Ten Hag. However, they are facing competition from Arsenal. Mikel Arteta has strengthened this season by signing Fabio Vieira from Porto.

Manchester United have failed to sign any players till now. The situation has been so bad that Manchester United CEO Richard Arnold met a group of fans who planned to protest in a pub to assuage their concerns.

If Arsenal do get Lisandro Martínez of Ajax for less than €40m it would be a steal. He has incredible aerial ability despite not being the tallest (think Roberto Ayala), great reading of the game and can build from the back. Will surely replace Otamendi for Argentina after WC.🇦🇷 pic.twitter.com/dqx6T0mGD0

United conceded 57 goals in the Premier League and had a goal difference of zero. Harry Maguire was especially woeful and earned the ire of fans and pundits alike. If Manchester United want to become a top-four contender, then a centre-back signing is a must.

Meanwhile, Arsenal were also woeful in defence which ultimately cost them the top four. Mikel Arteta has made massive progress in improving Arsenal; he still needs further signings. The Lisandro Martinez saga is far from over, and any club that signs him will be making a statement of intent.