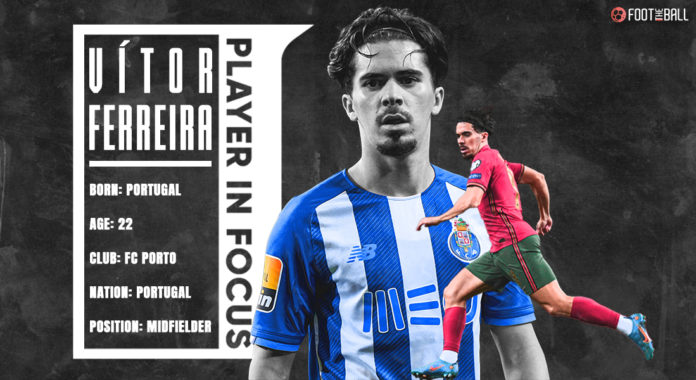 Sergio Conceicao is slowly establishing himself as a managerial force in football. The Portuguese helped Porto win their third league title in the last five years. Throughout the season, The Dragons had some brilliant players who helped them script the title win. First, there was Luis Diaz who is now mesmerising crowds at Liverpool.

The duo of Mehdi Taremi and Fabio Viera contributed 28 assists (14 each). Another player to come out with an impressive season is Vítor Machado Ferreira, known as Vitinha.

Paris Saint-Germain are set to sign Vitinha from Porto, here we go! The official proposal worth €40m has been accepted after personal terms agreed today. 🚨🔵🔴 #PSG

PSG and Porto are now preparing paperworks. He’s gonna be the first signing of Luís Campos, his real priority. pic.twitter.com/0BzQZd7nVy

The 22-year-old has hit the ground running in his first season in Portugal. Vitinha put on some good displays acting as the pass master for his team in the middle of the park.

Arsenal and Manchester United were looking to add him to their side, with both sides looking to bounce back after an underwhelming season. However, in the end it was Paris Saint Germain who swooped in the last minute and signed the talented kid.

Vitinha was used mainly by Conceicao in the middle of the park, especially as a substitute. However, his contribution is more impressive as he had a disastrous previous season with Wolverhampton Wanderers. And this was the reason why he started the season on the bench.

However, by mid-September, he was starting to become an integral part of the team. His return of one goal and two assists won him the league’s December Player of the Month.

Vitinha is one of those players who does not create a large number of assists but is hugely involved in chance creation. In addition, he is an expert at what one may call ‘pre-assisting’, the ball that may lead to an assist. So, he may not have good stats, but anyone watching the game can understand his importance.

The youngsters also like to exploit half-spaces in the opposition’s defence. He also can unlock gaps with his incisive passing and through balls.

And for all his attacking contributions, Vitinha also does more than his share defensively. According to StatsBomb, the midfielder averages 3.4 tackles and 2.5 interceptions per 90 minutes. These are impressive numbers for a central midfielder.

So what do his stats say?

The Premier League fixtures list is out. Check out key matches for the 2022-23 season

As mentioned earlier, Vitinha is a prominent part of his team’s creative force without a large number of assists. And a deeper look at his stats shows us the reason why. While the player has only two assists in the league, he is ranked as the 14th best player on the Expected Threats (xT) metric. The xT metric measures how much of an offensive threat a player is from different parts of a football pitch and is a more accurate representation of a player’s attacking contributions.

Based on the metric, Soccerment rated Vitinha as the 14th most threatening player in the Primeira Liga. However, his ranking in xT improves to fourth when only counting midfielders.

Meanwhile, Vitinha is really standing out in Liga Portugal Bwin. His influence in Porto's dominance of play is massive at this point.
Recently, he has even won the POTM award in the league.
Check out this radar chart about him.All stats are per 90 minutes. pic.twitter.com/sUTFRadPUr

What makes him unique is that he is threatening both through his passing and dribbling.

Vitinha created 43 chances for his team, an impressive return for a 22-year-old. He also loves to dribble and is quite good at it, with a success rate of 72.7 per cent.

His duel and aerial success rates are also a respectable 53.9 and 47.8 per cent, respectively.

Read More: Why Brennan Johnson is the best player in the Championship?

Vitinha completed more passes in the final third of the pitch than any other player in the 2021–22 league season. This shows why he has been so talked about this season—his domination in the midfield.

His performances have shown that he is wise and has an astute tactical understanding of the game. He also shared the pitch with Luis Diaz, who put in some brilliant performances for Liverpool. This shows that he will now be more comfortable taking his talents to a bigger league.

His struggle at Wolverhampton Wanderers has particularly helped him in refining his play. And if he keeps his growth for one more season, he can be the next big star to come out of Portugal.

In case you missed it: Will Erling Haaland be successful at Machester City?

His performances had caught the eyes of many clubs, but the front runners were Arsenal and Manchester United. He was also reported to be on the radar of Liverpool and Bayern Munich. However, while Jurgen Klopp has opted for Fabio Carvalho, the German club have added Ajax star Ryan Gravenberch to their ranks.

This left Mikel Arteta and Erik Ten Hag in a race to sign the youngster. Both teams, especially United, had gaping holes in the midfield, which they were looking to address in the transfer window.

However, it was Paris Saint Germain who finally signed Vitinha. The French champions had an underwhelming season as they did manage to win Ligue 1 but were knocked out in the Round of 16 by eventual winners Real Madrid. In addition, they also lost the final of Trophee des Champions and bowed out of Coupe de France in the Round of 16.

The club have also recently given the most significant contract in football history to Kylian Mbappe. This leaves them with less money for other positions. And it seems that now Paris Saint Germain are also willing to buy and develop young talented players rather than investing large sums in star players.

And even if Vitinha gets into the side, he will have to shed his attacking instincts a bit as the front three of Mbappe, Neymar and Lionel Messi are not known to carry out their defensive duties.

It is a tall order for Vitinha in Paris, but he sure has the skills to establish himself as a future star.