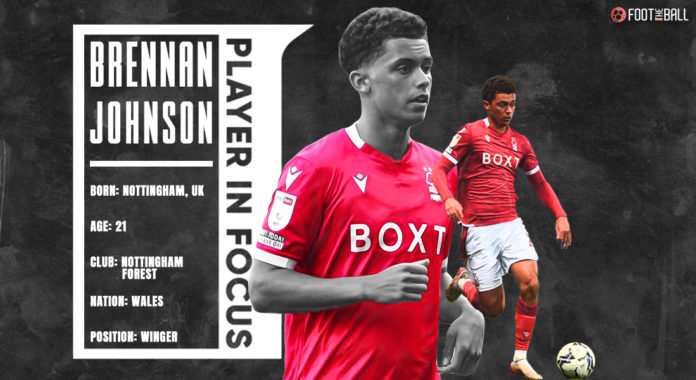 Nottingham Forest are back in the Premier League after 23 years! Steve Cooper’s side went through the grueling saga of the playoffs, winning against Huddersfield in the final. Forest had a dramatic upswing in form under Steve Cooper to race up the table. One of the key contributors to their rise back to the top has been Brennan Johnson.

Alongside flying fullback Djed Spence and James Garner, the 21-year-old Johnson has been a major hit. He became one of the most trusted lieutenants of Cooper, and armed with a new contract, is set to light up the Premier League next season.

We are delighted to announce that Brennan Johnson has signed a new long-term deal with the club. ✍️

There is immense potential in Brennan Johnson as evidenced by his stats, and he recently hit his first international goal for Wales in their draw against Belgium in the UEFA Nations League.

Brennan Johnson has been at Nottingham Forest since he was eight years old. He made his senior debut in August 2019, before spending the 2020-21 season on loan with Lincoln City. Johnson hit 10 goals and had six assists from 40 matches. Having returned to the Reds setup in 2021, he immediately became a fixture in the lineup.

The debutant in action 🌪 pic.twitter.com/Qvef8Ov0Rk

Johnson mostly plays alongside a partner up top. Forest have not been shy to trust Brennan Johnson who has bags of potential and his stats back it up. Furthermore, the most eye-catching thing about Johnson is how quickly he has settled into the Championship rhythm.

Read also: The best players who are ready to make the move to the Premier League

The English second division is often considered one of the toughest in Europe. The number of matches, combined with the immense talent of players, make for very interesting matchups.

Therefore, to see Johnson excelling so well in his first full season has been nothing short of mind-blowing. Moreover, his attacking exploits were one of the main reason why Forest finished with 73 goals scored, the third-highest in the league.

Wales have also benefitted from Johnson, having just qualified for their first World Cup in 64 years. The Forest attacker will be a key piece for Rob Page and co. in Qatar, with maestro Gareth Bale beside him.

16 goals and 10 assists saw Brennan Johnson crowned as the Championship Young Player of the Year.

The future is bright! ⭐️

Congratulations to @NFFC's Brennan Johnson, your EFL Young Player of the Month for September! 👏 #EFL https://t.co/K8rjCCgOxI

However, he can certainly improve his crossing, connecting just 25.3% of the time. Brennan Johnson has shown the potential of getting better in his distribution and is a keen dribbler.

He completed 49% of his dribbles but physicality is an issue. Johnson won only 14.3% of his aerial duels, and he will be bullied off the ball in the Premier League. Therefore, the improvement in physicality will be something that Forest will look to improve.

As the stats have shown, Brennan Johnson is a quick learner and will look to get in the best shape before the 2022-23 season begins.

The lively presence of Brennan Johnson has been a refreshing sight for Forest fans. His agile figure and quick feet have helped him draw 58 fouls. Johnson is a livewire when Forest lose the ball, hounding the opposing defenders.

The most goal involvements of any U21 player in the PL and EFL (20). 🔥🏴󠁧󠁢󠁷󠁬󠁳󠁿 pic.twitter.com/amseOMhAAH

That kind of commitment to the cause is reflected in the stats of Brennan Johnson. 42 tackles and 16 interceptions in 2021-22. There is no doubt that Steve Cooper has earmarked Johnson as the attacker who will track back on defence. Given his excellent speed and quick feet, he serves as the perfect foil to Keinan Davies.

James Garner and Brennan Johnson are part of the @WhoScored best rated players under 21 in the #EFL so far this season👏🏼 #NFFC https://t.co/YWWcXGvh4V pic.twitter.com/DpissHQlox

Johnson’s impact on both ends of the pitch bodes well for Forest who will be up against England’s finest in 2022-23. However, the key question is whether he will remain a Forest player?

Brennan Johnson’s performances have certainly brought in the admirers. Brentford were rebuffed in January. They will try again, in all likelihood. Moreover, there are a few clubs where Johnson would fit really well as his stats and potential have shown.

Crystal Palace are undergoing a youth revolution with Patrick Vieira. Arsenal are in need of a striker and Mikel Arteta is not shy to trust youngsters.

Therefore, it will not be a surprise if the best young player in the Championship becomes one of the Premier League’s breakout talents in 2023.