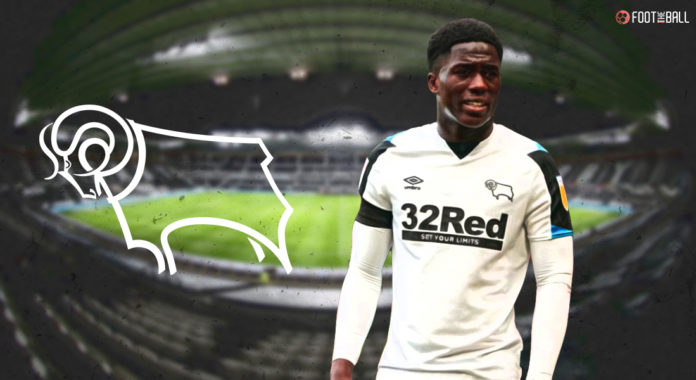 Forty-six matches played, 14 wins, 13 draws, and 19 losses, a goal difference of minus eight, and 23rd place finish in the league. On just a casual look, it would look like Derby County had an underwhelming season. Unfortunately, the Rams, who survived relegation by a single point last year, could not avoid the drop to League One this time.

However, the team were hit by a 21-points deduction after going under the control of an administration. From there, it was a tough ask for Wayne Rooney’s men, but they fought. There were many positives for the side from the current season. One of them is highly rated striker Malcolm Ebiowei. The 18-year-old burst onto the scene this season, scoring one goal and providing two assists.

Malcolm Ebiowei has earned the praise of his manager Rooney with several clubs reported to be making offers for the teenager.

But, who is Malcolm Ebiowei?

18-year-old Malcolm Ebiowei got man of the match for Derby last weekend.

Just look at him trying to hide his smile after getting his award ❤️❤️#DCFC
pic.twitter.com/yEv3E0LwxE

Who is Malcolm Ebiowei?

Malcolm Ebiowei is an 18-year-old striker who made 16 appearances in the Championship for Derby County this season. The youngster is an adept player who is good at scoring and creating goals. If Derby want immediate promotion back to the Championship, then players like him will be essential for the team.

He started his career with Arsenal, where he spent four years of his youth career. Then he spent two years at West Ham United and Rangers, respectively, before arriving at Derby.

Whatever this season ultimately brings, it’s given us Malcolm Ebiowei. What a gift. #dcfc pic.twitter.com/BI6eOturGF

His introduction to the team showed Wayne Rooney’s trust in the player despite their precarious situation.

Despite being just 18 years old, Malcolm Ebiowei has shown that he can handle pressure. With the club’s situation, it would have been difficult for any player to impact the team immediately.

In his short career, he has made appearances for Arsenal under 18 and West Ham United under-18.

So he has also had the experience of being in a top club which has helped him greatly if we see his appearances.

In the 16 appearances that he made, Malcolm Ebiowe made a significant impact. He took 23 shots, out of which six were on target, with a shot success ratio of 26.1 per cent. While his pass success rate is only 75.5 per cent, he is pretty good in duels (45.4 per cent) and dribbles (51.1 per cent). In addition, he has also created 19 chances.

Ebiowei is ranked as the 7th best ball carrying attacking midfielder / winger in the league on my ratings, and it is clear to see why. Going to be interesting to watch him next season #dcfc pic.twitter.com/x1gFguvSM5

His aerial success rate is 21.4 per cent, good enough considering his 1.85-metre frame.

In case you missed it: The greatest players to have never played at a FIFA World Cup

This season Malcolm Ebiowei has mostly played as an attacking midfielder in Derby’s 4-2-3-1 formation. But it has been enough to catch everyone’s eyes. He has shown himself to be very intelligent using late runs into the box. His only goal this season came that way.

He is also quite fast, which helps him overrun defences. Combined with his quick foot, this ability makes him a devastating player in the attacking third.

He is also a dead ball specialist, with one of his assists coming in from a free-kick.

Malcolm Ebiowe is already on the radars of many clubs. Manchester United are believed to be the frontrunner for the teenager. They think he will be an excellent addition to the club’s next crop of young players, such as Kobbie Mainoo.

Tottenham and Crystal Palace are the other two sides that have expressed an interest.

Steve McClaren leaving Derby to join Man United could be a factor – no decision yet. pic.twitter.com/5yHs1RTLxL

The team from Old Trafford could have an advantage due to the Wayne Rooney connection. But for now, Derby County would ideally want to keep him if they are looking to get back in the Championship and possibly the Premier League.