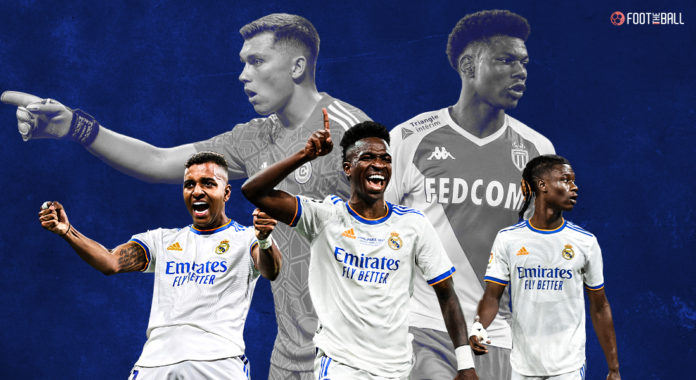 Real Madrid have a long and proud tradition of going after the best players in the world. A major part of their transfer strategy is based on filling their squad with superstars who deliver silverware. It was evident in the 1950s with Alfredo di Stefano, Ferenc Puskas, Paco Gento, and others.

The current era began in the early 2000s under the presidency of Florentino Perez. David Beckham, Luis Figo, Zinedine Zidane, Ronaldo, Kaka, and Cristiano Ronaldo are some of the biggest names that have donned the white color.

Also read: The best Galacticos of all time

However, the policy has changed a bit in recent years it seems. Madrid are now in the market for more youngsters who they can shape over the coming years.

Flashback to 15 years ago when Real Madrid had Ronaldo, Raúl, Zidane, Figo & Beckham in the same team 🔥 pic.twitter.com/aMZCMT3RTz

It was evident from the captures of Vinicius Junior in 2018, Rodrygo Goes in 2019, and Eduardo Camavinga in 2020. Especially, Vinicius Jr’s stats show his rapid progression this season.

The trio is among the top talents in the world currently.

Here are some Aurelien Tchouameni facts you don’t know!

Furthermore, they have also been monitoring 15-year-old Brazilian wonderkid Endrick Felipe (Who is Endrick Felipe). Therefore, it is clear that Los Blancos are pivoting to a younger bunch of players who will become their best selves after some years.

There are a few factors that are behind in this gradual change of strategy from Madrid and Perez. Firstly, given the amount of talent Madrid had accumulated over the recent years, a lot of them are still going strong. Casemiro, Luka Modric, Toni Kroos, Karim Benzema, Gareth Bale, and many others make up the list.

Therefore, Madrid have not had to go after established big names every year like in the earlier decades. Perez can take his time in scouting lesser-known youngsters properly who can get the perfect home at Madrid. Now that those players are approaching their final years, Madrid need their heirs.

Secondly, the onset of the pandemic has really hit clubs hard, with severe limitations on how much they can spend. This is not to say that Madrid are not spending sizeable amounts on the young players. It is just that the fees are not the astronomical sums of money that once used to go out.

The total combined fee of Vinicius Jr., Rodrygo, and Eduardo Camavina was just over €120 million, including add-ons. Given that they are 21, 21, and 19 years old respectively, that cost will be spread over several years which makes it some very astute buys.

That is what Perez is trying to repeat with Slonina and Tchouameni, though the latter may cost more because he is wanted by a lot of clubs.

So far, it has worked splendidly. Vinicius Jr. had a career year with Real Madrid in 2021-22, racking up 22 goals and 16 assists across all competitions. Rodrygo had several key goals in the UEFA Champions League as Madrid won their 14th crown.

Must read: All of Real Madrid UCL wins revisited

Vinicius Jr has scored 21 goals and made 20 assists for Real Madrid this season. Incredible numbers! 👏🏻 pic.twitter.com/zXxVAseqWC

Camavinga was a key player from the bench as he provided the much-needed impetus in the final parts of matches. Therefore, it is no surprise that Madrid are feeling confident about going after more youngsters. Even Eder Militao and Ferland Mendy have become key pieces of the lineup.

One of the standout defenders this season. 🇧🇷👊 pic.twitter.com/FFki2xlW8R

It is clear that a full-on transition is in progress in terms of the next generation of players. The moves for Slonina, with Thibaut Courtois already present, and Tchouameni, as Camavinga is just breaking into the first team, show Madrid’s intentions. Perez wants to snap up the best possible young talents in world football.

Camavinga on Aurelién Tchouaméni deal: “I hope Tchouaméni is coming to Madrid, I've already spoken to him. Let's see what happens in the next few days…”. 🇫🇷 #transfers

Tchouaméni told his teammates days ago about his decision and priority to join Real Madrid.

They tried really hard to sign Kylian Mbappe, but that move eventually fell through. Nevertheless, Madrid are not one to back down lightly in terms of their pursuit.

They will keep going after the best players, and given their financial resources, the fees will not be an issue.

The way of the future

More and more clubs are shying away from veterans in order to sign upcoming youngsters. Barcelona have Ansu Fati, Gavi, and Pedri. Bayern Munich are developing Jamal Musiala and Josip Stanicic.

Arsenal have promoted Bukayo Saka and Emite Smith Rowe from their academy, alongside have a big transfer window in 2021.

Therefore, Madrid are following the same blueprint. Apart from having a world-class appeal and trophies to boot, the history of Madrid also plays a pivotal role in convincing young players.

That is why Perez knows the importance of keeping up this new policy for the upcoming years.

Palmeiras gem Endrick [born in 2006] confirms to Marca his ideas for the future: "I love Real Madrid a lot! I read Real Madrid's history. I'm rooting for them to win another Champions League", he told @mariocortegana. ⭐️🇧🇷 #RealMadrid

Real have already opened talks to sign him. pic.twitter.com/eOb9WiHnQz

The intention with Endrick makes it clear that they are not content with only looking at sign-able players. They want to scout youth academies in search of the best upcoming stars. Needless to say, this is how the future is shaping up to be and Madrid are one of the frontrunners in this regard.