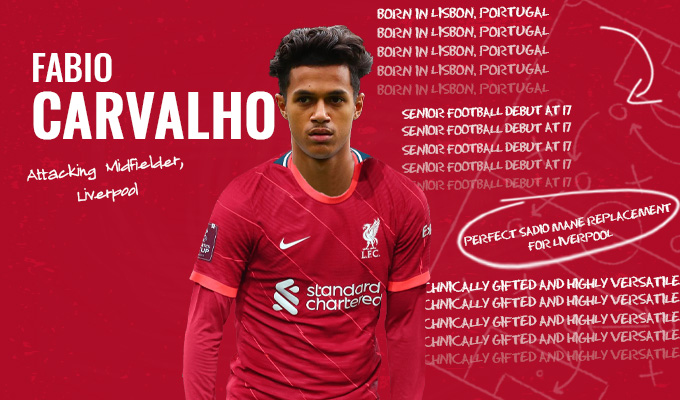 England have produced world-class players in the past due to their efficient youth system that provides professional resources. Promising talents are trained and nurtured at a really young age which is why we see so much competition in English football.

Fabio Carvalho, the 19-year-old prodigy is a product of such an academy as well who was a prominent name in the summer transfer market among Premier League giants. The young Portuguese was close to joining Liverpool in the January transfer window of 2022, but a deadline day move to Anfield collapsed due to a host of reasons. In the end, Klopp made sure of getting his man and Carvalho has finally been unveiled as a Liverpool player.

The now Liverpool superstar in the making had already racked up 11 goals and 7 assists in the 2021-22 season. Here’s everything you need to know about Fabio Carvalho and why he can make it big in the Premier League this season.

Fabio Carvalho was born in Lisbon, Portugal and only moved to England when he was 11. Having already been a part of Benfica’s youth academy, he was targeted by various clubs but he decided to play for Balham, a small club based in London.

In 2014, the player was picked up by Fulham’s youth team and since then he has been showing exponential growth in his game. In 2018 he got into the U-18 squad at the age of 15 and has made his way into the senior squad ever since. Carvalho has been playing in PL2 in their U23 squad for the last couple of seasons but he got his well-deserved break into the senior team in 2020 against Sheffield Wednesday in an EFL Cup fixture.

Fabio has also made headway into England’s u16,17 and 18 squads but a spot in the senior squad is still quite out of reach. Fabio Carvalho made 4 Premier League appearances in the 2020-21 season and even scored in his debut game against Southampton. His recent boost in the pecking order inside the Fulham camp had grabbed the attention of First-tier clubs all over Europe,only for Liverpool to grab him from under everyone’s noses.

Fabio Carvalho was one of the biggest names in PL2 back in the day and in the 2020/21 season, he scored 11 goals and 5 assists in just 13 appearances. His amazing showings in the lower division earned him a place in the senior team in the same season. Under Marco Silva’s management, the young Portuguese racked up his career best so far with 11 goals, while also setting up 7 assists for his teammates, in the 2021-22 Championship season.

Fabio Carvalho can play anywhere in the fontline which means his passing and dribbling should give him the extra edge to be creative on the pitch.

Fabio Carvalho has pace and agility on the ball which enables him to be all over the pitch, a quality needed in a number 10 in modern-day football. The playmaking position is no longer just mastering the art of passing but the player has to be solid in every aspect of the game. His skill and ball control complements well with his pace and enables him to operate far wide as well.

Fabio is even determined enough to press aggressively upfront which has won them the ball on multiple occasions. His passing and shooting prowess makes him an attacking midfielder and his physicality makes him an ideal winger. Fabio Carvalho is a manager’s dream addition to the attacking lineup. He still needs to improve on his crossing since it is Jurgen Klopp’s effective tool to get out of hairy situations without losing the attacking potential of the move.

Fabio Carvalho’s vision and ability to think quick on his feet makes him a gem among stones. At 19, Fabio’s understanding of the game in the final third makes him a lethal threat to the opposing goal. His unpredictable passes have often left defenders dumbfounded and his game’s spontaneous nature will come to light in time.

If the youngster continues to improve his overall game, he will turn out to be one of the best in the business when he hits his prime.

Fabio Carvalho has shown enough promise over the years that Premier League clubs had started sniffing around the attacking midfielder. His contract with Fulham expires at the end of this season and the player refused to sign a contract extension, so that he could sign for free for Jurgen Klopp’s Liverpool

Leeds United were the frontrunner for his signature last summer but no deal was completed. Even West Ham, Chelsea and Porto were interested in the 19 years old.

However, Jurgen Klopp seems to have taken a liking for the precocious attacker. Liverpool were really close to agreeing on a deal for the forward near the winter transfer window deadline, only for the move to fall through in dramatic circumstances late on. But they’ve finally got their man.

On the international scene, it seems like Fabio Carvalho is representing England but he also has the option to play for Portugal. England have too many players contending for a spot in the senior squad and Fabio might end up without any caps.

Jamal Musiala is another player who spent his childhood and youth in England but is currently representing Germany, the country he was born in. Carvalho has a better chance at playing in major international tournaments if he opts to play for Portugal and his home country will surely accept the promising talent with open arms. He won’t be an automatic starter for Klopp and Liverpool just yet, although with a bulk of time and age on his side, sky is the limit for the young Portuguese.