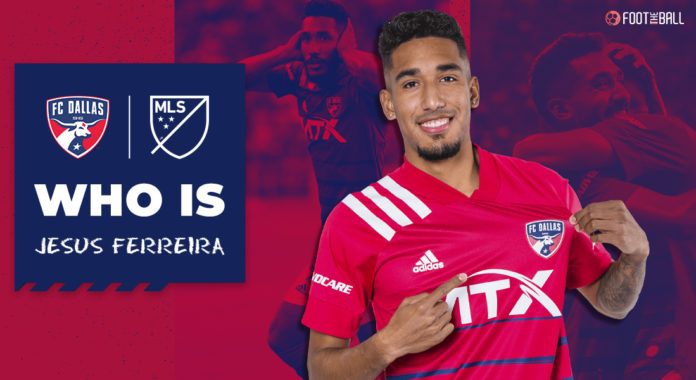 To say that Jesus Ferreira had a special season in 2021 may be an understatement. In most years, a player that scored eight goals and added in nine assists would have been in discussions for team MVP, if not somewhat in the running for league MVP. After a pretty tough 2020 campaign that saw him struggle to find his footing with just one goal and one assist, Ferreria regrouped and became one of the league’s best young players in the process.

Jesus Ferreira stole the headlines yesterday with FOUR GOALS in a game against Grenada for the @USMNT.

How good can be become?

Click to know all about the latest wonderkid from a golden generation of American soccer!#USMNT #JesusFerreirahttps://t.co/kX7HPxQwno

After a languid 40-plus minutes against Grenada, Ferreira brought the evening and his World Cup prospects to life with three goals in 13 minutes on either side of intermission, followed by a late fourth.

This already was just about the least climactic sendoff possible, coming more than five months before the World Cup and against a team ranked 170th on the planet. Add a heat index that hovered around 97 degrees at kickoff – Austin, Texas, was warmer Friday night than it’s supposed to be in Qatar this November, and you had the makings of a match that would test just about anyone’s focus, fitness and resolve.

Fortunately for the American men, Jesús Ferreira has spent a lot of his life in Texas. As uncomfortable as U.S. strikers have looked in recent months, and as much pressure as Ferreira could have felt as November nears, neither the heat nor the scoring drought seemed to weigh on the 21-year-old.

So who is the young attacker from Texas that has grabbed the recent headlines and is he crucial to USMNT at the FIFA World Cup 2022?

Who is Jesus Ferreira?

Jesus Ferreira is a 21-year-old USMNT professional football player who plays as an attacker for MLS club FC Dallas and the United States national team. Jesús David Ferreira Castro was born in Santa Marta, Colombia on the 24th of December 2000. He is the son of former MLS MVP and Colombia international David Ferreira.

He joined the club’s youth side and progressed through the ranks before signing a homegrown contract in 2016. He scored his first professional goal on his debut in June 2017 against Real Salt Lake.

FC Dallas attacker Jesus Ferreira is determined to prove himself as the top young player in Major League Soccer. The 19-year-old made his breakthrough with Dallas during the 2019 regular season and he bagged eight goals and six assists from 33 appearances for the Western Conference outfit.

In an exclusive interview with MLSsoccer.com, Ferreira revealed his ambition to replicate the performances from his previous experiences and make goalscoring contributions on a more regular basis.

“I want to accomplish a lot of what I did earlier in my career – get more goals, more assists. Keep the coach having me in the starting XI and just working hard,” He told.

Fereira has been with Dallas since the age of nine and he made his first-team debut during the 2017 season. Over the past year, he has become an accomplished player under the guidance of Nico Estevez and it remains to be seen whether he can stay consistent with his displays.

As holistic as his skill set is, as promisingly as he seems to be linking up with teammates like Christian Pulisic and Tim Weah, that allows the persistent concerns about the team’s lack of scoring punch up top.

Ferreira has shown the ability to spring his teammates into promising situations in the final third and regularly speaks of the growing understanding among the USMNT’s creators as Berhalter tweaks the team’s build-up tactics in search of a spark or two. Berhalter likes what a false 9-ish type like Ferreira can offer. Then again, some of his most successful sides had pure finishers leading the line, whose sole job was to get on the end of service into the penalty box.

After a breakthrough 2019, Jesus Ferreira had a nightmare 2020 season with FC Dallas and his once high career trajectory was thrown in limbo. Hard work and solid coaching put him back on track in 2021 and his impressive production saw him return to the USMNT.

Ferreira recognizes the stakes as the Qatar 2022 World Cup approaches, and is doing his best to stay grounded and go one step at a time.

“As a forward it’s important to score goals, to keep your mindset right,” he said. “For me, I think I have a good group of people around me that help me stay focused and know that the goals will come. I know that right now, I’m going through a little struggle, but it’s something that if I stay focused and I keep working, things are going to bounce my way.

To Ferreira’s credit, the finishing struggles we’ve seen so far can be attributed to a few things: big-game jitters, a step up in competition, and international inexperience. All could be factors.

And, on the club level, he’s certainly finished his chances, as he leads MLS with nine goals so far this season. Internationally, he has three goals from his first 11 caps, including a vital goal agaisnt Panama in the final World Cup qualifying window – a fine haul considering his age and position.

It’s not that Ferreira can’t finish, because he absolutely can and has shown he can. He’s a good young striker that can definitely find the back of the net. With few days between the U.S. and their flight to Qatar, there isn’t that much time to make impressions or add wrinkles to your game. To this U.S fans can expect the attacker to move to one of the Top 5 European Leagues and get himself polished before setting foot on the big stage.