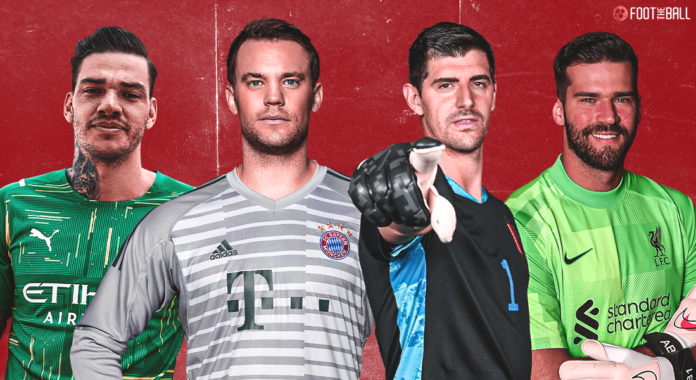 Goalkeepers are the last line of defence in football. They can stop certain goals and produce magical moments which keep their teams in the game.

No matter how much focus is on offence, without the goalkeeper in top form, a team will suffer. Therefore, it is no surprise that managers and clubs are spending the big bucks on goalkeepers.

Who is the best goalkeeper in the world right now? 🤔 pic.twitter.com/OPKzKd17xl

There are a handful of the world’s best custodians, who mostly play for the top teams. They are serial winners over the years, and have been imperative in their team’s successes. FootTheBall talks about the 10 best goalkeepers in the world currently.

One of the finest signings made in the Jurgen Klopp era. After the disastrous 2018 UEFA Champions League final, it was clear that Liverpool needed a new number one. Alisson has been outstanding from all types of shots, with his ability to smother one v one situations second to none.

“He made vital saves and then there was the way he was coming for the crosses. And then making the save from the penalty to carry us through. An unbelievable performance.” #awlive [telegraph] pic.twitter.com/lLWVwWX9CA

The Reds have not been shy to go after top players, as evidenced by their recent captures of red-hot Luis Diaz, and the Uruguayan striker Darwin Nunez. Alisson also scored for Liverpool in 2020-21, and has racked up a Golden Glove award alongside winning all the club trophies on offer.

Though his debut season with PSG did not go so hot, Donnarumma is one of the best goalkeepers for the future. He won the Best Goalkeeper award from FIFA in 2021 and was instrumental in winning against England in Euro 2020 final.

Donnarumma will be one of the big names missing at the 2022 FIFA World Cup. Here are the others

Gianluigi Donnarumma didn't realise that he had won Italy the game after saving the penalty against Saka 😅 pic.twitter.com/zubwYI7blU

Donnarumma was unflappable in goal, with his tall frame and quick reflexes praised by everyone. One of the star clients of the late Mino Raiola, there is little doubt Donnarumma has a long, storied career in front of him.

What do you do when your world-record signing does not work out? Get a cheaper replacement who excels in that same role. Chelsea’s gamble with Kepa failed miserably, leading them to sign the-then unheralded Edouard Mendy. Combined with Thomas Tuchel’s expert defensive setup, Mendy blossomed into a supreme goalkeeper.

Edouard Mendy Made 4 Saves against Man Utd. The last time Kepa equalled or got more was in the 2-0 win over Liverpool in the FA Cup. That was in March.

Mendy also made 3 Diving Saves against Man Utd. The last time Kepa managed that was on New Years Day (1-1 vs Brighton)
#CFC pic.twitter.com/eQFTSWEvp0

His fast hands and ability to read the game made him an essential piece of Chelsea’s 2021 Champions League triumph. Though his passing from the back can improve, Mendy does great at his primary job.

A stalwart for Bayern Munich over many years who shows no signs of slowing down. Neuer has been the backbone of the Bavarians through their years of dominance. A two-time Champions League winner, Neuer is heralded for his master sweeping abilities. He is always extremely alert behind the backline, sensing danger and rushing off the line.

Manuel Neuer made 16 saves in the Nations League, the most in League A of the competition so far [@WhoScored] pic.twitter.com/hrCjJmXrRE

Furthermore, Bayern Munich’s faith in him is so huge that they sold two of their young rising goalkeeping stars in 2022. The club captain will be hoping to lead them to many years of dominance and silverware.

A nation with two of the world’s best goalkeepers? Lucky Brazil! The Selecao are spoilt for choice as to who starts for them at the 2022 FIFA World Cup in Qatar. Ederson has been Manchester City’s number one ever since joining.

📊| Ederson vs PSG, game by the numbers:

Pep Guardiola has transformed his game, with Ederson now supremely comfortable with the ball at his feet. In fact, the pair have joked about letting Ederson playing in midfield. A regular Premier League winner, Ederson shared the 2021-22 Golden Glove award with Alisson.

The 2022 Champions League winner, Courtois put in a world-class performance to thwart Liverpool as Real Madrid won their 14th crown. The Belgian has been a phenomenal player for all of his clubs, and Los Blancos are truly benefitting from his expertise.

The top facts you have to know about Thibaut Courtois

Madrid won the 2021-22 La Liga title at a canter, with Courtois dominating the penalty area. Therefore, there is no doubt that he will continue to be a central part of the club’s future.

The Slovenian has one of the best saves records over the past few years. Oblak goes largely under the radar due to the more flamboyant names around Europe. Nevertheless, the famed defensive techniques of Diego Simeone would not work without Oblak.

81.8% – Jan Oblak had the best save percentage of any goalkeeper in La Liga last season. Floe. #PremiosLaLiga pic.twitter.com/hyAO3l9Z3m

He was not at his best in 2021-22, but expect him to bounce back with some superlative performances. A five-time winner of the Zamora Award, Oblak remains an elite goalkeeper.

A league winner in consecutive seasons. Maignan was one of the heroes of Lille’s amazing 2020-21 Ligue 1 triumph. His performances earned him a transfer to AC Milan, who were looking for a replacement for Donnarumma.

The Rossoneri were in top form throughout 2021-22, pipping arch rivals Inter to their first Scudetto title in 11 years. Moreover, Maignan is mobile inside the penalty box, and is extremely focused on the job at hand. A rising star with a bright future, Maignan will be among the greats soon.

There have been criticisms of De Gea in recent years, with onlookers pointing out his lack of good distribution and command of the penalty area. However, when it comes to saving shots, De Gea remains a top goalkeeper.

👏 Only Alisson (+2.6), who has snuffed out numerous high-probability chances, holds a better post-shot expected goals differential than the #MUFC goalkeeper.

That was reflected by a save percentage that was amongst the best in Europe in 2021-22. Manchester United’s defence was as shoddy as it gets, so it is no surprise that there was a lot of pressure on De Gea. Therefore, De Gea was one of the most important reasons why the Red Devils did not lose by more. His spot in this list, however, is at the most threat after an inauspicious start to the season.

The Hungarian international has been a mainstay with RB Leipzig since 2015. Though the club has signed his replacement in Maarten Vandevoordt, Gulacsi remains an essential piece.

15 saves already this season 🧤
An absolute wall at the back ⛔
Our number ☝️, Peter #Gulácsi.

Gulacsi captains Die Roten Bullen and the upstarts have become a formidable challengers. The 32-year-old is cool-headed in pressure situations and is able to distribute well. Gulacsi has been ever-present for Leipzig, and is their leader on the pitch.