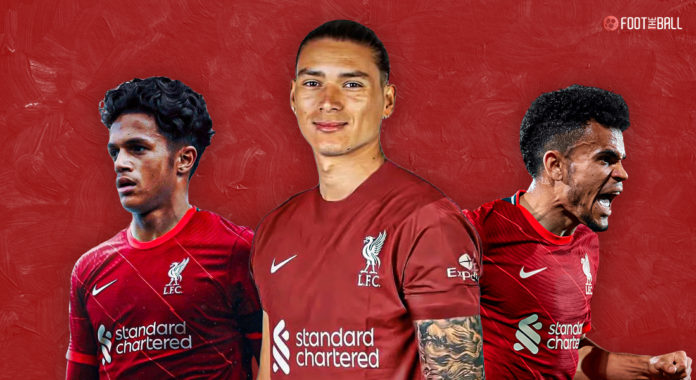 Liverpool mean business in the summer transfer window. Having already wrapped up a deal for Fulham prodigy Fabio Carvalho, the Reds have now gone for the jugular. They have wrapped up a stunning deal for one of the hottest properties on the market, Darwin Nunez, from Benfica. The Uruguayan striker joins for an €80m fee plus €20m add-ons.

Therefore, that is some serious cash spent on a player who with bags of potential, but just one great season under his belt. Moreover, this transfer was Liverpool’s answer to Manchester City signing Erling Haaland. However, will Nunez live up to the hype? Can he mesh with the Reds’ vaunted frontline? Will Roberto Firmino upstage him?

Liverpool are not done yet, signing 19-year-old right back Calvin Ramsay from Abderdeen

🇺🇾 24th May 2019: This is what happened when Darwin Núñez made his first appearance in Europe at the 2019 U20 World Cup in Łódź.

Back then, he was just a teenager playing for Peñarol, three years, and many goals later, he’s on his way to #LFC. pic.twitter.com/DjCT5dUFWg

These are just some of the questions that will surround the new signing. Therefore, FootTheBall looks at the transfer in-depth to uncover some of the answers, and how may Nunez fare.

First things first, Darwin Nunez can play two positions. Either he is the focal point of attack or he can go down the left flank. Therefore, Liverpool’s use of a front three will benefit Nunez greatly.

However, the Reds already have Colombian star and fan favourite Luis Diaz on the left. The Colombia has settled in well enough for Jurgen Klopp to trust him in big matches within weeks of signing.

Darwin Nunez and Liverpool seem to be a great pair, and here’s what may in store for the future!

Moreover, with Sadio Mane on the verge of leaving, that would mean Nunez playing through the middle. Therefore, that is a position where he will be able to cause maximum damage.

Firmino has been a great servant to the club, but injuries curtailed his impact in 2021-22. However, he can still be a force to reckon with, and this is where the uniqueness of Klopp’s coaching shows up.

All five of Liverpool’s current crop of attackers can play in all three positions. Mane has been excelling through the middle, stats king Diogo Jota can take over the left side, and all the players are versatile enough to wreck havoc no matter their position. Nunez will be the latest addition to this combination, and should fit in seamlessly in Liverpool’s style.

As mentioned above, Nunez has had one excellent season in an European top-flight league. He had 26 goals and four assists in the Portuguese first division, alongside six strikes in the Champions League.

LFC fans, this one is for you! Get up to speed with your knowledge on Darwin Nunez through these incredible facts!

Nunez advances with the ball superbly, with 5.42 progressive carries per 90 which puts him in the 91st percentile for players in Europe. Moreover, he is also an avid dribbler, completing 1.61 per 90, good enough for the 88th percentile.

That second goal is a thing of beauty…. pic.twitter.com/01iZ2DGpa4

Klopp’s pressing system needs attackers who will regularly apply pressure on defenders. In this regard, Nunez is better than most. He had 15.24 pressures per 90, on par with half of Europe, combined with 1.03 tackles and 0.59 interceptions per 90. Therefore, he will be relied upon to hurry the opponents after Liverpool lose the ball.

Additionally, Klopp has integrated the high press in all of his players, and Nunez will have to buy into that culture. Having watched him in 2021-22, it should not be too hard for the pair to do it.

The most talked about point of the whole saga. Paying almost €100m for player who has had one breakout season in Portugal? Sounds like a stretch. Liverpool have not been known to break the bank often.

That has been one of the hallmarks of outgoing director Michael Edwards and FSG. The Reds always look to studiously assess their targets and get them for a decent amount.

Here are the facts you need to know about Michael Edwards, the man who got Virgil van Dijk, Diogo Jota, Alisson, and Thiago to Anfield!

Darwin Núñez could be a done deal for LFC. Let's wait for the club's confirmation but looks really exciting sign for the reds for next season. Adding speed, power and goals will gave more in specific moments like UCL Final, FA cup final when opponents open a bit spaces.

Therefore, Nunez’s move has raised eyebrows. The Premier League is one of the hardest leagues in the world, and Nunez will certainly look to Diaz for inspiration. The wide attacker joined from Porto, and shown that a quick adaptation can be made. However, Nunez has been signed as the main striker who should provide 20+ goals every season. Therefore, he will need to hit the ground running.

The future is promising for Klopp’s men 📈 pic.twitter.com/sp0XL1jgUo

He achieved that feat for the first time in 2021-22, with his previous best coming for Almeria back in 2019-20 with 16 goals in the Spanish second division. Therefore, what works in favour of Liverpool and Nunez is age.

Nunez is just 22-years-old, which means he will be a big part of Liverpool’s coming decade. A six-year contract has been signed, meaning the cost will be less than €20m per season if he stays for the full duration.

Liverpool have made Darwin Nunez the most expensive Uruguayan in history. At 22 he has the ability to go on to be a one of the world's best strikers. Expensive signing but one of value if he can score 20+ a season for the next number of years. Dave's theory on Darwin's evolution.

It is a big bet on the future, with Liverpool hoping that Nunez keeps on firing. They are hoping to unearth another Mo Salah or Mane. A €100m is just about right for a player who was coveted by many top European clubs.

Manchester United and Bayern Munich were in the race, but Liverpool swooped in to complete the deal. Now it is up to Klopp and his staff to get the best out of Nunez.

There must have been talks between Diaz and Nunez before the latter’s move to Anfield. Moreover, the Uruguayan will look to emulate the early form of Diaz, who had four goals and three assists in the league. Obviously, the two players’ profiles are different, with Nunez more of a centre-forward. He can hold up the ball, and has great pace to outrun defences.

Nunez will show to feet just like Mané, Jota or Firmino do for Liverpool, and that creates space in behind the last line.

He is a massive target and regularly shows for the ball so the idea that he doesn't suit Liverpool as a #9 doesn't make any sense.

Moreover, Nunez has already shown that devastating form against Liverpool in the Champions League. The splendid performances over the two legs definitely had a big part to play in convincing the Reds.

Furthermore, Klopp is known for easing his players over time, and it could be the same with Nunez too. Needless to say, the title race is getting more intense with every season, and Manchester City have already gotten stronger.

Some Liverpool 4-2-3-1 options with Darwin Nunez in front of a support striker or a No.10 pic.twitter.com/1tPIdnnvWc

Moreover, the painful loss to habitual winners Real Madrid in the Champions League accelerated the need for a new goal scorer. However, the fans are hyped and Nunez could prove to be an excellent piece of business from a club that excels in this area most of the time.