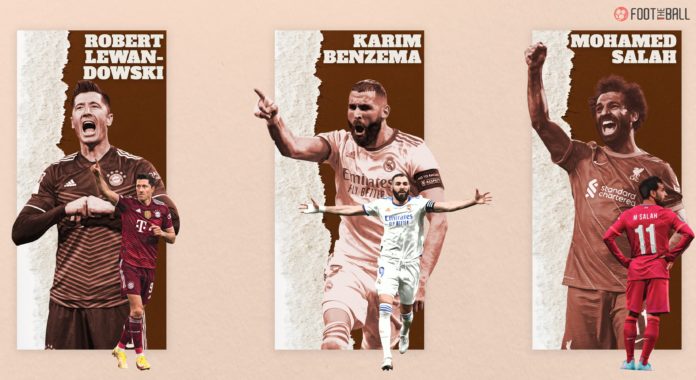 The battle for the biggest individual prize in football is heating up. The top-30 list for Ballon d’Or 2022 is out and the debates have begun. Is this the year where Karim Benzema wins it for adding another UCL to Real Madrid’s illustrious history in the Champions League?

The French striker left his imprints all over a stupendous last season. Benzema finished the 2021-22 campaign with 58 goal contributions (44 goals and 14 assists) across all competitions.

Other competitors have cases of their own. Is Barcelona’s new man Robert Lewandowski’s single-minded approach to goalscoring enough to get him the Ballon d’Or? What about Kevin de Bruyne, the catalyst of what many consider one of the best club sides in football history in Manchester City?

Surely we can all agree now that @Benzema deserves the Ballon d'Or next , don't we ? 🧐#Ballondor #Benzema #Benzemaballondor #RealMadridVsLiverpool #realmadrid #UCL pic.twitter.com/GHQwvSIwVv

The snubs are as interesting as the contenders. Serial winner Lionel Messi has failed to rank in top 30 after an unconvincing first season at Parc des Princes. His teammate Neymar also missed out. Cristiano Ronaldo made the list after a good goalscoring season with Man Utd but his lack of team success would likely make him an outside bet at best.

We rank the top contenders for Ballon d’Or this year.

The veteran striker has had a great year, with his best-ever haul in terms of goal contributions. That has seen Benzema win the Golden Boot in La Liga too, alongside the Spanish Super Cup, La Liga, and Champions League titles.

Moreover, Benzema has had several masterful performances in Europe to further help his cause.

He scored hat-tricks against PSG and Chelsea, to go with the second leg heroics against Manchester City. Therefore, Benzema will be a deserving candidate if he is crowned the recipient of the award.

The 2020 Ballon d’Or will forever remain one of the most unfortunate events in footballing history. The event was cancelled due to the onset of the coronavirus pandemic, with everyone believing that Lewandowski was the worthy winner.

Nevertheless, he has consistently put up eye-popping numbers. 2021-22 saw 56 goal contributions (50 goals and six assists) across all competitions.

Robert Lewandowski is topscorer in Europe’s top five leagues (35), Golden Shoe winner for 2022, and second topscorer in the #UCL (13). He’s scored 50 club goals in all competitions this season. Yet his name is hardly even whispered in FOTY conversations. I wonder.

Lewandowski picked up the Golden Boot in the Bundesliga as Bayern Munich romped to a 10th consecutive league crown.

Also read: What is Mia San Mia and how it came to be associated with Bayern Munich

However, the Bavarians were embarrassed by Villarreal in the quarter-finals. Therefore, it will certainly count against Lewandowski’s chances of finally winning the Ballon d’Or.

Man of the match in the UCL final topped off a sterling season for Thibaut Courtois last year. The oft-derided Belgian shot-stopper truly arrived for Los Blancos last year as he put his off-field drama behind him to become the undisputed No1 at Real Madrid. With that, he probably entered the race for the best GK in the world. His team won the La Liga title while conceding the least goals, at 31. In the UCL, Real Madrid often looked shaky and faced a lot of high-quality shots, but Courtois was the last line of defence that proved to be unbreakable.

Karim Benzema put the ball in the net on the attacking side, but Real Madrid wouldn’t have had the success they did last season without Courtois’ heroics at the other end.

It was a mixed season for Salah for club and country. He had the most goals (23) and most assists (13) in the Premier League. Liverpool won the Carabao Cup and FA Cup. However, the Reds lost out to Manchester City in the title race before losing to Real Madrid in the Champions League final.

Salah had a solid performance in the latter, but Thibaut Courtois’ heroics thwarted him every time.

Mo Salah wins the play maker award and the Golden boot 👏👏 What a season pic.twitter.com/Dii8mNrN2M

Moreover, on the international scene, Salah and Egypt suffered heartbreak in the AFCON final before failing to qualify for the 2022 FIFA World Cup in Qatar.

Therefore, it is unlikely that Salah will be able to win the Ballon d’Or simply based on the two domestic cup competitions and personal awards.

The Robin to Benzema’s Batman. Vinicius Jr. had a breakout campaign with Real Madrid which led to him racking up 22 goals and 16 assists in all competitions. Moreover, the wide attacker was a nightmare for defenders all season long, epitomized by his goal against Manchester City and of course, the game-winner in the Champions League final.

Vinicius Jr. is only 21 years old and has the brightest of futures ahead of him. Except for the Pichichi trophy, Vinicius Jr. has the same number of accolades as Benzema. However, it will be a big surprise if he is given the Ballon d’Or ahead of his teammate.

Another French superstar, whose future has been settled for now. Mbappe has reaffirmed his commitment to PSG for three more years and had another superb year on the pitch. 39 goals and 22 assists from Mbappe saw PSG win the Ligue 1 title. Never mind his off-field issues, Mbappe is one of the most lethal finishers on the planet.

🤩 Kylian Mbappe's had quite the season in Ligue 1 pic.twitter.com/MqnJTEAkxT

However, PSG’s collapse in the Champions League round-of-16 took the shine off their great season. Mbappe is one of the likeliest winners of the Ballon d’Or soon as the era of Cristiano Ronaldo and Lionel Messi winds down. Therefore, this year will not be his for sure, but there’s a chance he makes the top five.