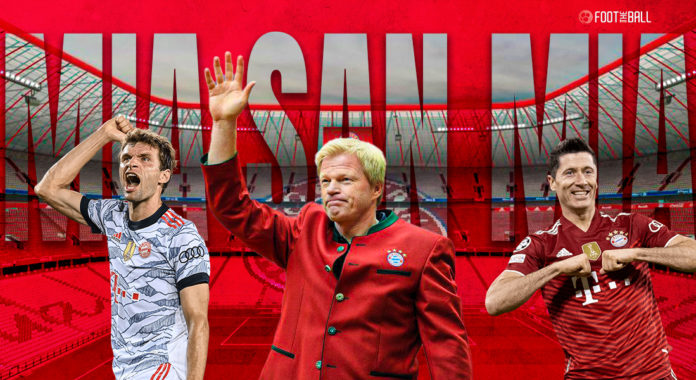 While Mia San Mia didn’t help them win the cup (Bayern lost 2-1 to Porto in the final), it became ingrained in the club’s philosophy. The motto explains the club’s rich history, will to win, and incredible self-confidence. But what does Mia San Mia mean?

The motto has been brought from the German “Wir sind wir”. This roughly translates to English as “We are who we are”. The motto has its roots in the military slogans of the Austrian army. In a statement to DW, former player and current CEO of the club, Oliver Kahn, explained the importance of the motto. “Kahn said that the motto was a source of inspiration and self-belief not bordering on arrogance. “It also means to carry the envy and jealousy of half a country on your shoulders,” Khan said.

The motto also manifests Bayern’s identity as the cub that always demands the best. So, naturally, the best players play at the club, the club has the best facilities, and the club requires the best.

Davies on the meaning of #MiaSanMia: "When I came here, I quickly learned that: Mia san mia, we are a family, we go through good and bad times, on and off the pitch. And we fight in every game we play." ❤#MiaSanFamily @FCBayern pic.twitter.com/NfULWsBRkn

The motto has been so steeped in the club’s philosophy that in 2010 the club came out with 16 golden rules on the philosophy. Ironically, this also came in a season when Bayern Munich reached the final on the continental stage before losing it (to Jose Mourinho’s Inter Milan).

The principles are written on a wall at the club’s Säbener Straße training base.

Messi fan? Check out what to expect from the Docuseries ‘All or Nothing: Argentina’

UEFA Champions League nights are what Bayern Munich are built for.

Let’s show the world why we’re 6 times Champions of Europe.

Besides this, the club also tries to listen to their fans. The Bundesliga has a 50 plus 1 rule which bars any single investor from having a stake of more than 50 per cent in the club. Therefore, the club was among the few that rejected the Super League idea. Mia San Mia also inspired the idea behind this rejection. Bayern are a club that believe in fair play and openness in competition.