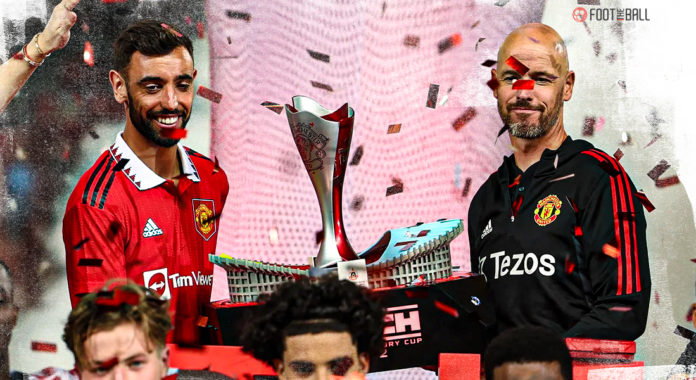 Manchester United have finally won a trophy! Erik ten Hag’s first game as manager ended in victory as the Red Devils lifted the Bangkok Century Cup. The more pleasing aspect of it for the fans was Liverpool getting thrashed 4-0.

Granted, the Reds had lesser time to prepare and mostly played their youngsters, but United fans will not care. The era of Ten Hag has gotten off to a flier, and there were many things that would have excited everyone watching.

United finally looked like playing at a high-class level, which has been sorely missing over the past few years. Therefore, the supporters will take any crumbs of comfort they get. FootTheBall looks at five things that really should herald the dawn of a new era.

What Ralf Rangnick was supposed to provide, Erik ten Hag is supplying. United looked hungry for the ball right from the start. They were pressing Liverpool as soon as they lost the ball.

Tyrell Malacia is the first signing of the Ten Hag era. All you need to know about the rising leftback of the Netherlands

Even when Alisson had the ball, there was no respite. The forwards were lurking around the penalty box at every opportunity, while the midfield stepped up all the time.

Ten Hag's narrow 4-3-3 press isn't linear. Certain times the fullbacks won't be able to back up the press so the wide player will use the oppo FB as the trigger. That'll certainly be the case in settled play anyway. Key difference is the far side winger collapses the play inside.

Even the central defenders were not staying in their own half, looking to drive or play raking passes. All of it culminated in United winning the ball back way more times than their opponents throughout the match.

Of course, they were better prepared and had more time to ready themselves. However, if they can continue doing this over a full season, Ten Hag would have done something spectacular indeed.

When Erik ten Hag trotted out all this senior players, the team was almost an replica of that under Rangnick. The only difference was Anthony Martial starting instead of the absent Cristiano Ronaldo.

Fans would have assumed that it would be the same old 4-2-3-1, but on closer inspection, the formation resembled a 4-3-3. Fred, Scott McTominay, and Bruno Fernandes did the bulk of the work, while the front three utilized their great pace.

Will Frenkie de Jong finally come to Manchester United? Here’s what all is happening in this crazy transfer saga

Jadon Sancho, Marcus Rashford, and Martial would be a formidable threat with their constant running. However, the finishing could have been better, in lieu of all the chances they created. The decision-making also has to get sharper in certain situations, but there was much to like in this new setup.

The commitment to having more bodies streaming forward is straight from the Ajax playbook. The Dutch giants were lightning quick in transitions, and United are following that template. Liverpool were just overwhelmed with the number of players in the final third.

John Murtough is leading the search for new players, and should be given time to succeed

This was most evident during the second goal, as there were 5-6 players in and around the penalty box. The play eventually ended with Fred chipping Alisson, as the defenders had nowhere to go.

Therefore, it is clear that Ten Hag is not afraid to attack wholeheartedly. While the previous managers took a more cautious approach, the new boss will let opponents know they are never safe.

Inverted fullbacks and adapting to situations

Diogo Dalot and Luke Shaw started the match in a throwback to the Rangnick era. That was where the similarities ended, as Erik ten Hag had them doing much more. Each fullback had a terrific understanding with the forward in front of him.

The #MUFC players definitely empowered to do more on the ball than we're used to seeing past few years, relying on multiple touches to get the best pass off. A better technical shape, not giving #LFC chance to pass from back to front. #MUTOUR22

Whenever one of Sancho or Rashford went wide, the fullbacks came infield. This inverted nature helped keep the formation narrow, even as United tried to make use of their speedy attackers. This has a few benefits.

United will be in a better position to win possession back or stop opponents from attacking quickly. Moreover, the fullbacks also get forward themselves whenever the attacks tuck inside. This was seen when Dalot crashed a shot off the crossbar after neat buildup play from the back.

As with every good thing, there are cons. The backline, though confident, were found out a few times. The nervy nature of the past season popped up at times, with Liverpool’s attackers running at them.

Fabio Carvalho and Luis Diaz had good chances to score which came following the inability to clear their lines. Raphael Varane and Victor Lindelof held their own, but this team will concede a lot in the high-stakes matches.

Therefore, it is no surprise that Erik ten Hag wants to bring in Lisandro Martinez from Ajax. Though Harry Maguire remains captain, the backline as a whole needs help. The competition is intense, and there can be no slipups at any moment.