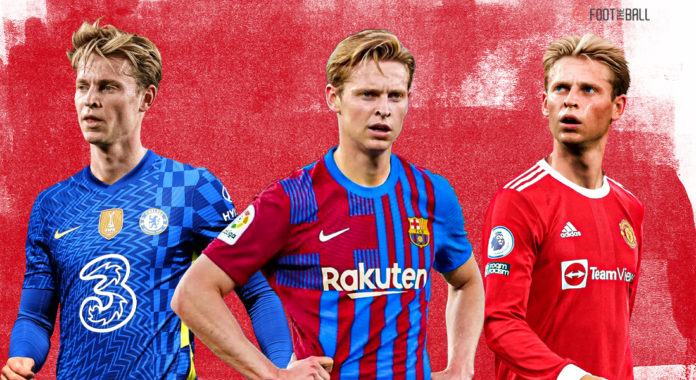 Well, the Frenkie de Jong transfer saga refuses to die down. The Dutchman who joined Barcelona in 2019 for a €75 million fee failed to hit the ground running. Nevertheless, his transfer saga has been the talk of the town this summer. While Manchester United were the frontrunner for the most part, Chelsea have now entered the race.

The Blues are looking to rebuild their squad under new owner Todd Boehly. After an underwhelming season, Chelsea have already lost Romelu Lukaku, Antonio Rudiger, and Andreas Christensen. However, recent signings of Raheem Sterling and Marc Cucurella have softened the blow somewhat. Still, De Jong remains a mercurial talent, guaranteed to improve both Chelsea and Man Utd, if he joins.

Earlier, it seemed that Manchester United had matched Barcelona’s valuation. According to media reports, the Red Devils were offering a package of €85 million which includes €75 million in guaranteed payments, and €10 million as add-ons. However, just like so many times in the summer Chelsea are now trying to gazump United’s deal. The Blues, who had a frustrating season finishing a distant third behind Manchester City and Liverpool are also looking to upgrade their midfield. However, the key piece of the puzzle remains agreeing to terms with the player himself.

And the tale took perhaps the most surprising of turns when it was reported that Barcelona had threatened Frenkie de Jong, yes threatened to accept a contract on reduced wages. According to media reports, the current board has found ‘evidences of criminality’ in the new contract that was offered under the regime of previous president Josep Bartomeu.

The midfielder is currently owed €17 million in wages and the Barcelona board believe that they don’t owe that amount because the new contract was illegal. De Jong’s sale is considered to be important as it will allow Barcelona to register all their new signings. La Liga has asked the club to further reduce the wage bill before the registration process. De Jong is currently the highest earner in the team and if he leaves it would significantly lessen the wage bill at the club.

The 25-year-old has played 138 matches scoring 13 goals and providing 17 assists at Barcelona. However, his impact has not been as strong as the club wanted. De Jong’s arrival at the club also came when Barcelona were going through their worst phase.

During his three-season stay at the club, Barcelona lost 8-2 to Bayern Munich, got relegated to Europa League, lost Lionel Messi to Paris Saint Germain and almost went bankrupt.

And it seems Barcelona want to cash on him due to their precarious financial situation. However, what could scupper the deal is Frenkie de Jong’s refusal to move clubs. The Dutchman wants to stay and fight for his place at Barcelona. Moreover, the issue of his deferred wages, whereby he is still owed at least 17m Euros by Barcelona, is a big obstacle.

While it was reported earlier that Barcelona had accepted United’s valuation, the club had not agreed on personal terms with the player.

In 2019, the Frenkie de Jong transfer saga was going strong. The then 22-year-old was part of an Ajax golden generation who won the Eredivisie and reached the Champions League semi-final. It was enough for Barcelona to splash €75 million on him.

The Catalans had won the La Liga but choked again in the Champions League against Liverpool. In that 4-0 defeat against Jurgen Klopp’s men, the Barcelona midfield was overrun several times.

This prompted the club to sign the youngster. However, he could only manage two goals and two assists in the league. A significant reason was that he was played out of his position.

Barcelona ended up finishing second in the league. The club sacked manager Ernesto Valverde in between seasons, replacing him with Quique Setien. However, their most humiliating moment would come in the Champions League.

Playing against Hansi Flick’s Bayern Munich, Barcelona were thrashed 8-2 at Estadio da Luz. This was their worst defeat in 74 years. De Jong’s stock fell in this match as, despite playing four central midfielders, they were overrun again in the middle of the park.

In the next two seasons, they have failed to win La Liga, with Atletico Madrid and Real Madrid winning one each.

Barcelona’s defeat against Bayern Munich came just after the Covid-’19 pandemic. It severely affected the club and reached a point where even Lionel Messi announced that he would want to leave the club (which he did a year later, albeit under different circumstances).

However, de Jong was still considered integral to the team’s future. However, it started to change after the appointment of Xavi. The former Barcelona legend wanted to build a squad with players from the team’s famous youth academy La Masia.

So in came such as central midfielder Pedri, and Gavi who were joined by Nico Gonzalez and several other players to the senior side. While currently, de Jong is arguably the most talented of the lot, Xavi thought that La Masia graduates had a higher ceiling.

I am 100% convinced with the fact that de jong didn't even fullfill his 50% of potential which he showed in ajax in his three season two were with messi who automatically makes everyone looks good in team and in 3rd he was outshined by gavi and pedri. He is quality

During this entire time, the financial threat that started during the Covid-19 pandemic was still lurking in the background. And when the 2021-22 season ended, Barcelona had tough choices.

The condition was so precarious that Barcelona activated their “Economic Levers“, selling a portion of their future earnings from selling merchandise and television rights to have a reasonable transfer budget.

And this started a curious transfer saga. The sale of the merchandise and TV rights were expected to bring €700 million to the club. However, that still wasn’t enough. La Liga told Barcelona in no uncertain terms that their books were still not balanced. Thus started a poker game between de Jong and Barcelona. Who blinks first?

Manchester United and Chelsea are the frontrunners in the Frenkie de Jong transfer stakes. Both teams, especially United, are looking to revamp their midfield to challenge the domestic and continental front.

But before we delve into that, we must ask, is the sale of Frenkie up to Barca? That’s a complicated question. Publicly, the club would keep him, but only if he agreed to another wage cut/deferral. Laporta has repeatedly insisted that Frenkie needs to “help the club too”.

Spanish journalists are intrigued to know why Chelsea owner Todd Boehly is in Barcelona, he was asked & he replied for a meal. I suspect his here to talk about Frenkie de Jong. pic.twitter.com/MzbE2VjrhK

It is no secret that de Jong has failed to adapt to Barcelona’s style. However, his stock is still high, and with age on his side, he is one of the few sellable assets Barcelona have. This approach of Barcelona could be due to the massive losses they have taken on big signings such as Ousmane Dembele, Phillipe Coutinho, and Antoine Griezmann.

According to media reports, the club want to recoup the amount they paid for his transfer to Ajax. Xavi intends to build his midfield around La Masia graduates and would like the money earned from de Jong’s transfer to be invested in other areas. As it stands, they can’t register the players who have already arrived without selling some of their own.

The club have already sealed the signing of Robert Lewandowski as the marquee name. Huge cash has been splashed on Raphinha’s transfer and Jules Kounde. Moreover, multiple players have arrived on a free transfer which is cheap in name only.

Furthermore, targeting a world-class player like Bernardo Silva means Barcelona are in serious need of sales. Frenkie de Jong transfer then solves multiple problems. A huge earner off the books, midfield logjam sorted, transfer fee in Barcelona’s coffers and United get their marquee target. At the center of the storm remains the player. What does he want? Man United’s No1 target is clearly de Jong.

Personal terms, still the issue to be resolved – as Frenkie’s priority is to stay at Barcelona. pic.twitter.com/aTYnV3cHkP

To say that United had a poor last season would be an understatement. Under Ole Gunnar Solskjær, and Ralf Rangnick, United had their worst points haul in Premier League era. One key area where the Red Devils struggled was midfield.

Fred and Scott McTominay failed to control games in the middle of the park, a weakness exploited by teams many times. Frenkie de Jong could be that midfield orchestrator for the club.

Furthermore, he will be under Erik ten Hag’s guidance at Manchester United. It was under the then Ajax manager that de Jong had become one of the best players. And a reunion with his former boss is tempting. He would instantly become the first name in Erik ten Hag’s ideal Man Utd team

However, Chelsea have a far superior squad than United and has a better chance of winning a silverware. With compatriots such as Jorginho, N’Golo Kante in midfield, de Jong will be at much more ease.

Thomas Tuchel, like Ten Hag, also has experience in getting the best out of their players. De Jong would not only be a quality addition to United’s midfield but would also be a future successor for Jorginho.

Both clubs have already fought in the transfer market for Lisandro Martinez with the Red Devils winning the race. Chelsea now want to return the favour.