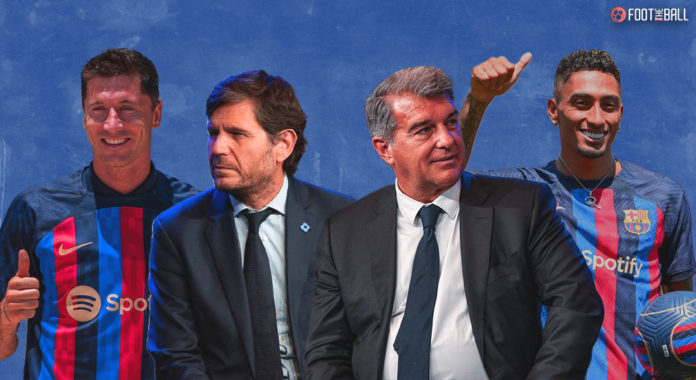 Barcelona are rich! Or are they? This is a question that has dominated and divided the footballing world in 2022. When Joan Laporta took over in 2021, the financial situation was a mess. Barcelona had debts of more than €1 billion.

They had to let go of club legend Lionel Messi. However, just a year on from that, the Blaugrana have signed Raphinha and Robert Lewandowski. The pair have cost in excess of €100 million. Now they are in the running to close the transfer of Marcos Alonso after confirming the signing of Jules Kounde!

Moreover, they had also bought Ferran Torres for more than €50 million. Incredibly, that is still not all. Since January 2022, Barcelona have signed Eric Garcia, Pierre-Emerick Aubameyang, Franck Kessie, and Andreas Christensen on free transfers.

Remarkably, none of their signings, including Dembele, who signed a new contract, can be registered yet! With that news came the revelation that Barcelona might have to activate their 4th economic lever. And they have now officially gone ahead and done that.

The Blaugrana announced the sale of yet another part of Barca Studios to a company called Orpheus Media for around €100m. This activation of the 4th lever will make sure the registration of latest signings, mainly Lewandowski, Raphinha, Kounda, Christensen and Kessie.

FC Barcelona announces the sale of 24.5% of Barça Studios to the company Orpheus Media for an amount of 100 million euros. This sale will serve to accelerate the growth of the Club's digital, NFT, and Web3 strategy.

Indeed, these “economic levers” have dominated conversations inside the club, alongside their sponsorship deals. So, what are these new, creative ways that Barcelona are doing in order to become competitive again?

“Economic levers” is a phrase that Laporta has continuously used for much of his presidency. The economic levers, in very simple terms, is the club using its assets to get money. This was announced in a meeting with the club’s members earlier in 2022.

There are seven levers, of which three are known so far. The first involved selling 49.9% of Barca Licensing and Merchandising (BLM) company. That reportedly netted the club around €300 million.

Barcelona are considering pulling the third lever (BLM + Barca Studios) to be able to register the new signings.

The second lever will be effective within next few days, allowing Barca to have the money for signing Raphinha and Lewandowski.

The second lever revolves around 25% of the club’s La Liga TV rights. Barcelona have already sold 15% for €207 million to Sixth Street Capital for 25 years. Additionally, they could sell another 10% but it remains to be seen whether that extreme option is taken.

How Barcelona are “more than a club” has a rich history. Read it here!

The third lever also centres around BLM and Barcelona Studios. A 24.5% stake has been sold to Socios.com in exchange for 100 million Euros. Similar to the 3rd lever, a 4th lever has also been activated, which states the sale of 24.5% of Barça Studios to the company Orpheus Media for an amount of 100 million euros.

It is the most recent official confirmation of a lever being turned. However, more could soon be coming. Catalunya Radio had reported that La Liga had told Barcelona they still can’t register their new signings. With this recent lever pull, it all but confirms the registration of all those new signings. This means a further 24% stake in Barcelona Studios has been sold, taking the stake sold to 49.5%. Still, Barcelona face problems getting their team ready for next season. That’s where the next step comes in.

One of the major sponsorship deals for Barcelona in recent times has been their partnership with Spotify. The streaming giant is now the club’s principal sponsor, alongside taking over the naming rights of Camp Nou.

The deal is worth €240-280 million over four years. Moreover, the stadium can also be booked for music concerts, special programmes, and even weddings.

All of it will only generate more revenue for the club. Another key way from which Barcelona have raised money is through loans.

Laporta refinanced the club’s massive debt through €500 million loan from Goldman Sachs, which includes a grace period of five years.

Furthermore, Goldman Sachs have also taken on the planned renovations to Spotify Camp Nou over a 35-year plan. Needless to say, Barcelona are taking money from a variety of places. But will the plans eventually work?

The ongoing sage surrounding Frenkie de Jong is getting to a desperate stage. The player does not want to join Manchester United. He does not want to leave Barcelona unless €17 million around deferred wages are paid. In many ways, the sale of Frenkie de Jong can be considered another economic lever for Barcelona. It is one of the few ways that does not involve risking the future of the club.

Barcelona are unwilling to pay and have asked him to find a new club. Manchester United are heavily interested, but there are a lot of convoluted parts. This highlights Barcelona’s problems in a nutshell.

Who is Alberto Moleiro, dubbed as the ‘next Pedri,’ and on Barcelona’s radar?

The players they want to sell have few or no takers. Philippe Coutinho joined Aston Villa, while Clement Lenglet and Antoine Griezmann have been sent out on loan. However, the likes of Samuel Umtiti, Neto, and others are still stuck. Puig has joined LA Galaxy but he only earns a small amount and is unlikely to move the needle much in terms of transfer fee either.

🚨 Frenkie de Jong wants to join Manchester United but is holding out for Barcelona to pay his deferred wages before joining Erik ten Hag at Old Trafford.

It is a matter of principle to him.

Moreover, there have also been rumours of Memphis Depay exiting. No doubt, player sales will massively benefit the club. Not only in terms of fees but the lessening of the wage budget.

Senior players like Gerard Pique, Marc Andre Ter-Stegen, Jordi Alba, and Busquets have already taken pay cuts. Ousmane Dembele has extended his deal with a new contract and reduced wages. Will it work?

What does the future hold?

€481 million. That was the amount of loss that Barcelona ended for the previous financial year. La Liga’s strict financial fairplay (FFP) rules forbid clubs from going all out on players. Barcelona can only spend 1/3rd of their total income on the purchase of players.

The club is trying to get that to 1:1 through these financing methods, which are beneficial in the short term. However, there are a lot of uncertainties when it comes to the long game. Barcelona are betting on winning silverware right now, and being amongst Europe’s elite.

There is no guarantee that either will work out. Lewandowski, Pique, Busquets, Alba, and Ter-Stegen are the veterans who do not have many peak years left. Barcelona are partially committing to the rebuild through the likes of Pedri, Gavi, Pablo Torre, and others.

Laporta has to make sure that his plans are thoroughly covering all the potential outcomes. Europe, as a whole, is strengthening manifold and Barcelona are going all-in on becoming a competitive team in a short time. Succeed, and all the hoopla around levers goes away. Failure would mean a fate even worse than where Bartomeu led Barca to. In that case, Barcelona’s future will be mortgaged while the present will be underwhelming. Only time will tell if this bet works out. For now, fans and Laporta can celebrate their new signings in hope of a better future. Clock is ticking.