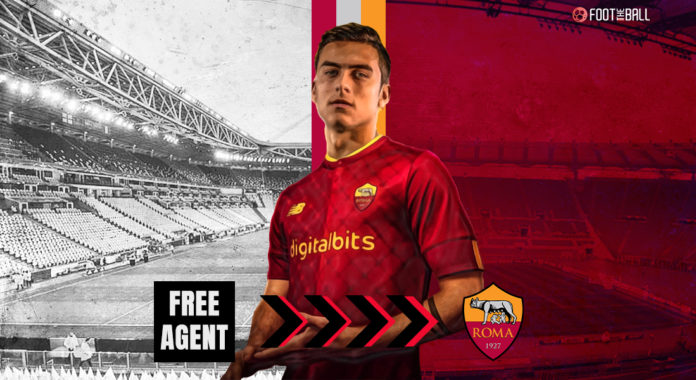 Juventus have long been known for their shrewd businesses when it comes to free transfers. From Andrea Pirlo to Paul Pogba(that has already happened twice) and most recently Angel Di Maria. So when The Old Lady decide to let go of one of their own on a free transfer, it’s sure to raise some eyebrows. Paulo Dybala who spent countless successful years at Juventus, left the former Serie A Champions for free this summer and to everyone’s surprise, has decided to join Jose Mourinho’s Roma.

The Argentine attacker decided to join the UEFA Europa Conference League Champions after Roma manager Jose Mourinho convinced him that he would be their main man alongside Tammy Abraham. The 28-year-old has played 210 league games for the Bianconeri and has got an impressive goal tally of 82 goals, supplemented by 37 assists.

With keeping all that in mind, Dybala is no doubt one of the finest players in world football out there, let alone one of the free agents. But will he be able to adapt to Mourinho’s old-school system and tactics? FootTheBall breakdown his transfer analysis and grade how well he fits into Roma’s system.

Dybala most impresses with his close control on the ball and the twinkly, quick movements he makes under pressure. He is capable of getting out of trouble or combining through congested areas of the pitch, by dribbling past the pressure he is under without risking conceding possession. His judgement of when to release the ball through the opposition defence and how to do so complements that. He can therefore be very effective between the lines as he can dominate in the spaces around the central lanes – his vision, creativity and execution with his left foot.

He is also a very good finisher of the ball, when even if he continues to favour his left foot there is a variety to his finishing. So many of his efforts have come after he has dribbled away from pressure, or beyond defenders, when his agility and pace contribute as much to him beating defenders as it does the manner of finish he attempts. It is also significant, however, that many of those shots on goal have been intercepted making him a more effective goalscorer when he receives a return pass or after dribbling past defenders who might otherwise have blocked his initial shot.

His versatility make him a valuable asset for any team he plays for and Jose Mourinho would be very happy to make him part of his plans for the 2022/23 season.

The attacking and creativity stats for Paulo Dybala in the UEFA Champions League are exceptional. Dybala has attempted a total of 13.71 attacking actions and has a very high success rate with those attacking actions as he has completed 60.58% of them. He has had 44.873% of his total shots on target, with 3.2 shots per 90. Dybala is a player who is always a huge threat in the opposition penalty area with great decision-making when he gets the ball in the penalty box.

Every free transfer always proves to be value for money – because let’s face it, the player hasn’t cost the club a single penny. Similarly, with Paulo Dybala’s move to Roma being a free transfer, irrespective the player being a hit or miss, Jose Mourinho wouldn’t mind the occasional dip in form from the Argentine attacker.

A tricky player to get him off the ball, Dybala is a workhorse both in and out of possession. His admirable workrate means opposition defenders are constantly on edge wherever he’s around, and he anticipates potential goal-scoring opportunities seconds before others realise the potential danger.

Given his small frame, Dybala’s game needs improving is his ability to win aerial duels. Despite his ability to dribble quickly and move past opposition defenders, his tricky style also means that he draws fouls regularly, increasing the likelihood of him getting himself injured.

Paulo Dybala is an excellent forward who could be a stunning addition to this current Roma side that plays under Jose Mourinho. However, his quality warrants him to play in a much bigger setup and team, there might not be a better manager right now than Mourinho to get the best out of him.

If Mourinho sticks to his current tactics, Dybala could play the Lampard role from his time at Chelsea arriving late in the box, but his versatility will help him slot in all the attacking positions that Mourinho sets up for his team. Either way, Dybala will be an important player for Roma next season as his quality and pedigree show he can influence any game at the highest level.