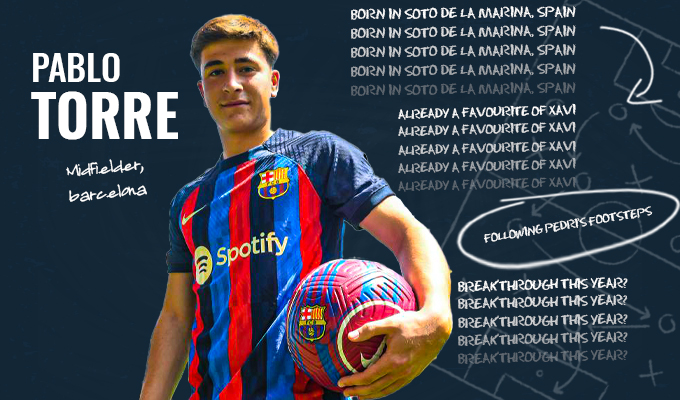 The good times seem to be returning at Camp Nou. Xavi hit the ground running last season and they are set to return to the Champions League. The squad strengthening is underway, economic “levers” are being activated. However, the most transformative signing in the long term might end up being the one made last season.

As the club dashes to arrange deals for Lewandowski and announces Raphinha, the first appearance of 19-year-old Pablo Torre Carral in pre-season has gone under the radar. Signed from Racing Santander last year, he already has the fans giddy after a silky and mesmerizing debut.

The excitement around Pablo Torre is certainly palpable. Considered the best prospect from the club’s academy since Sergio Canales, the expectations are high. Furthermore, with the Blaugrana trusting young talent more and more in the team, there is no doubt that Torre has found a great platform to continue his upward trajectory.

Xavi has been very clear in trusting players without looking at their age and that trend bodes well for Torre who was already the best player in his division last season. Time at the top will only make him better.

Pablo Torre was not always destined to join Barcelona. The teenager was born in Cantabria, and it made sense how his early career unfolded. Torre joined local side CD Marina Sport, where he quickly caught the eye of observers as one to watch for. It was not long before the biggest club around, Racing Santander, came calling in 2015. Torre joined the youth setup of the U13s and continued his rapid development.

It was evident that Los Verdiblancos had a unique gem on their hands, not seen since the days of the aforementioned Canales. Having made a strong impression in youth football, Torre was given his professional debut on October 18, 2020, against league side Portugalete. It was the same season that Racing began life in the old third division and finished fourth, just missing out on promotion. Meanwhile, Torre had already established himself as a regular with Racing and Spain U19s.

It was clear that he was going to be an ever-present in the lineup for the 2021-22 season. When his move to Barcelona was confirmed, Pablo Torre didn’t let it get to his head. He kept putting in assured performances. Now the time has come for him to step up and make his name at Barcelona.

Torre’s breakout season went full guns blazing. He had 19 goal contributions. 10 goals and nine assists saw Torre comfortably in the upper echelons of both categories. Torre has been a solid performer offensively as he consistently outperformed his expected goals and assists. He is averaged over 85% passing accuracy and completed over 90% of his dribbles in every match. This just goes to show how comfortable Torre is on the ball and why he demands it all the time.

🎥 Pablo Torre with an assist against Cultural Leonesa today pic.twitter.com/fsWFwrzk81

Torre is not built too physically yet and wins about 50% of them while his aerial game certainly needs improving as he rarely competes. Furthermore, he is also adept at winning the ball as evidenced by 60 recoveries already this season.

40 of them have come in the opposition half meaning Torre can be found everywhere on the pitch where the ball is. Moreover, he has attempted 89 passes in the final third and completed 75 of them. Therefore, Torre is always looking for the next man and how to progress the attack.

As is the case with any young baller, it’s more than just the numbers. Torre has been likened to a young Luka Modric, or even a young-er Pedri at times. Those are some lofty comparisons but it is easy to see why that is the case. Torre can be best described as a playmaker for all positions.

He likes to roam across the pitch, picking up the ball and driving at defenders. Torre’s confidence on the ball belies his age and he can quite literally dictate the tempo of how his team plays. When he does drop deep to collect, there are two options. Either he instantly looks to cover ground quickly and get into dangerous positions.

Or he looks for players up the field and executes passes that are definitely not easy. Well, not easy for a player of his age but Torre’s footballing brain has always been different. Playing ahead of the midfield pack, Torre wants to link up play which makes him more dangerous as the opposition is not always sure of his intentions. Though his physical game needs work, Torre has enough in his arsenal already to hit the ground running at Barcelona.

The ability to see things before his peers. Pablo Torre, like many of his Barcelona colleagues, has the innate sense of making the pass before actually executing it. Therefore, the element of surprise is always present in his game.

Torre’s low centre of gravity and the fact that he can drift into spaces all around him makes him difficult to stop as evidenced by his 41 progressive runs. He has the qualities to become an even more dynamic threat because Torre is so young.

Barcelona have secured a superb talent in Pablo Torre who has been the third best advanced CM in Primera Division RFEF this season according to my rating model. His creative and ball progression numbers are off the charts.

One to watch for the future. pic.twitter.com/45jg7zsNpJ

The fact that he can still be moulded into a player for all positions across the midfield will benefit both team and player. Moreover, Torre is also packed with flair so teammates will always be benefiting even during tough situations. His reading of the game helps his team to always find ways of scoring and Torre knows he can affect games from a variety of situations. He is also a set-piece specialist with Barcelona’s website calling him a “natural choice for dead ball situations.”

Pablo Torre has inked a four-year deal with Barcelona from start of the next season. The club already confirmed on their website that he will link up with the B-team in the beginning. However, there is no doubt that Torre will be seen very quickly in the first-team as well, possibly this year itself. Not many teenagers make an instant impression in Barcelona’s first team but Pablo Torre has put himself squarely in the limelight with a sterling first performance in the pre-season.

Xavi has already embraced the youth influx full on, with Spanish star Gavi, Nico Gonzalez and Ansu Fati all becoming part of the squad. Torre has already expressed a desire to follow in the footsteps of Pedri, who really set the template for the current crop of youngsters. Barcelona has become something of a go-to place for players anointed as the “Next Pedri”, with Las Palmas’ Alberto Moleiro also joining soon.

Torre was also being scouted by arch rivals Real Madrid last year, and was close to joining them. It took the intervention of director Mateu Alemany and Xavi himself to ensure that he came to Camp Nou. Torre has been impressed with what Barcelona are doing, especially with their teenagers, and wants to prove that he belongs there for many years. On the basis of the evidence so far, there’s no doubting that thought at all.