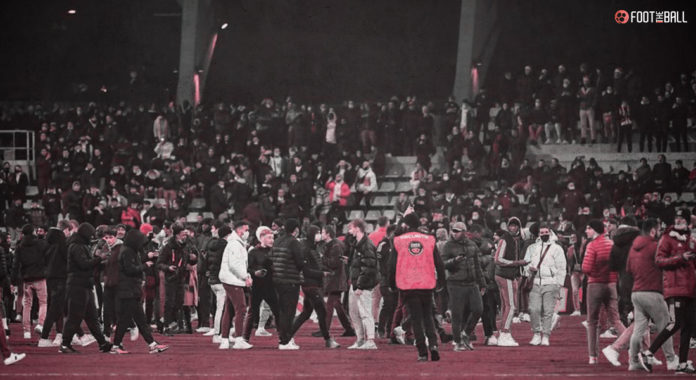 This was supposed to be the year Ligue 1 finally got the respect it was due from the footballing world. With the greatest player of all time stolen in the night from Barcelona, and the prodigal son kept away from Real Madrid, PSG were (and are) set to take back the French title. The challengers, Marseille, Lyon et al, were spurred on by Lille’s fairytale last season. It was meant to be a season for the ages.

What has unfolded on the field has been disappointing, to say the least, with PSG 15 points clear and coasting since the start of the season. In absence of any sporting competition, the most “exciting” thing in Ligue 1 has sadly been the incessant crowd trouble.

It is not a new phenomenon in football or in France by any stretch of the imagination but this campaign has been plagued to an unnatural extent, perhaps the most disturbed season in Europe’s top five leagues this millennium. Since the opening day there have been problems – missiles thrown, players hit, pitches invaded and even fans kicked by club staff. It begets the question, why is French football undergoing such a turbulent phase?

Macron, Covid and Beyond

Football, or sport, is usually reflective of the general society around it. UK football was violent and repressive during the Thatcher era while Soviet teams were noted for their collective lack of individualism. France today is no different.

The Gilets Jaunes movement at the end of last decade left an indelible mark for the masses, showcasing the pervasive feeling of dissatisfaction. The Covid pandemic did not help. France arguably had the widest spread anti-restriction sentiment outside of the USA with regular protests, stoked by right-wing politicians. A look at the upcoming Presidential elections reveals a deeply fractured society that needs an outlet.

That has manifested itself in the stadium going crowds as well with over 10 incidents in Ligue 1 involving fan problems leading to suspension or postponement of matches. And it’s not just the top division that has the problems. Olympique Lyon and Paris FC were both thrown out of the French Cup after their match could not go ahead due to crowd trouble. Ligue 2 has also seen multiple such incidents.

Breaking | Paris FC and Lyon have both been kicked out of the Coupe de France, following the crowd trouble that marred their tie. More follows.

Further, several experienced stewards were removed from their positions during the period matches were held behind closed doors because of the pandemic. They have not returned to their positions since fan presence resumed, leaving behind an under-staffed and inexperienced stadium security. This has allowed the crowd trouble to fester and boil over from the stands.

Star Among The Doom And Gloom

The context makes Red Star Paris’ dedication to making their stadium a safe space even more impressive. The fourth oldest club in France, founded by Jules Rimet, currently plays in the third division of the country. Their reputation and following though far exceeds that of an average third division team.

Their name already suggests a leaning towards a certain stream of political thought but that was surprisingly not the reason for the naming. The name Red Star came from a maritime line on which Rimet’s nanny (or mistress, reports differ) travelled to France. The leftist progressive image though was caused by an adoption of the club by people of the same beliefs rather than by design.

And amidst the deterioration of France’s supporter culture, Red Star maintains its lofty standards. Supporters do not engage in any sexist, homophobic or racist behaviour, and aim to foster a collective appreciation for both sides in the stadium. The crowd at their home, a 10,000 seater Stade Bauer in the Northern suburbs of the city, is certainly one of the most diverse in Europe.

“It’s like a party inside the stadium, especially before Covid when we could drink inside the stadium. And the culture is the best thing about it,” says Paul Guyonnet, who has been a regular at Stade Bauer since 2014, coming from all the way across the city to watch the games.

Red Star’s morality goes beyond the bare minimum. The fans and the club organise several events to make it a true community club. The Red Star Lab offers younger players the opportunity to learn things from different fields to ensure that their perspective is not just narrowed to football. During covid, several drives were organised to help the socio-economically weaker supporters. During a troubled time in French football, and society, Red Star remains a guiding beacon.

Going to a match at Stade Bauer is almost a religious experience for any socially conscious football fan. The atmosphere is bouncing, the aesthetics mesmerising and yet the stadium retains a homely feel to it. The tickets are cheap, making it a favourite of students like myself. The architecture, which is due to change soon, gives it a certain quirk – a triangular apartment building behind one goal acts as a personal stand for its residents.

The club is currently fighting relegation, and on the evening of my visit they took on then fourth-placed Annecy. A gloomy drizzly late winter Paris Monday night could not dampen the spirit of the place and Red Star rightfully ran out 3-0 winners, another battle won in their fight against the current.

France is currently at an inflection point – and its path will likely be affected greatly by the upcoming political changes. Red Star Paris though is an insular example of how people can not only retain but also practice their innate morals despite several hurdles.