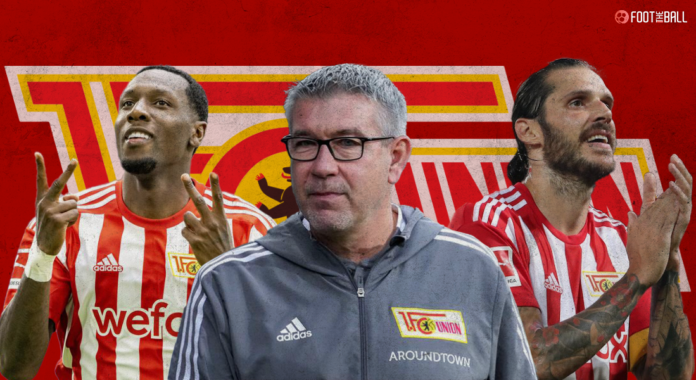 Leicester City in the Premier League 2015/16 season and the Greece National team at the Euro 2004. These are two teams that went against all odds and ended up winning their respective competitions. Nobody even counted them anywhere close to what they achieved and that is the best part. These two teams were underestimated, however, they played so well and beat all the odds.

A similar team to these is Union Berlin in the Bundesliga. The club have gone through an absolute rollercoaster over the past few years, from playing in the second-tier of German football to qualifying for Europe in a matter of just three years.

They have experienced some very rough patches, almost filing for bankruptcy back in the year 2004. Since then, fans have witnessed the club going on an incredible journey from being a small club with less money to playing exciting football and qualifying for the UEFA Europa League. Let’s look at the club’s journey, their playstyle, their best players and what lies ahead.

Another underdog story, that comes in the form of Belgian club Union Saint-Gilloise

Union Berlin are promoted to the Bundesliga for the first time in their history 👏 https://t.co/E4bZa4YrFj

How fans of Union Berlin helped save their club

In the year 2004, Union Berlin was on the verge of filing for bankruptcy and was also in danger of sliding into the 4th tier of German football. They needed £1.5m to fend off bankruptcy. Union Berlin’s fans have always been there for them when the club needed them the most. They couldn’t see their club perish and came together to keep their club afloat. The supporters organised a campaign named ‘Bleed for Union’ where they donated blood and forwarded the reimbursement to Union Berlin.

Four years after this, the club risked losing their stadium licence because of crumbling terraces. Stadion An der Alten Försterei is the fans’ home. This time too, the fans came together to save their home. Nearly 1,600 supporters volunteered and worked for an estimated 140,000 hours to get their stadium back to the right standard.

A club with that background and those struggles with fans who are so passionate. It is unimaginable how the fans must have felt when their club gained promotion to the Bundesliga. It is no surprise when the club finally gained promotion to the top-flight, emotions were very high among a fanbase which had been through everything down the years. Their journey from despair to an ultimate high has been nothing short of inspirational.

Before sending shockwaves throughout the Bundesliga, Union Berlin were considered outsiders in Germany. A glimpse at the club during the Cold War years which makes their promotion to the top-flight even more impressive.

During the Cold War years, Union were the antithesis of their city rivals, the best team in Berlin, Berliner FC Dynamo. Dynamo had relations with Stasi, the East German state secret police. Due to this, they would get referees to call in their favour and poach all the best players in East Germany. So it is no surprise that Dynamo won 10 East German league titles in a row between 1979 and 1988. They also regularly competed in Europe too.

Leicester themselves had an underdog fairytale back in 2015/16, but The Foxes are struggling this season

This was unfair and the people recognized it. Union were their only rivals in the capital and received a lot of support, becoming a resistance against the Stasi and the government, so even people with not much interest in football came to their games. Union Berlin were overlooked for the most part and spent the nineties in the third division. It was never an easy ride and they always had to do things the hard way but they still had their moments along the way. An example of this is during the 2000-2001 campaign, Union made it through to the German Cup final, losing 2-0 to Schalke across town at the Olympiastadion just years before they almost went bust after plummeting into the fourth division. However, Union have never thrown in the towel and have continuously hauled themselves out of the mud.

Andras Schäfer scores and Union are in European football for the second year in a row. #UnionInEurope 🛫🇪🇺 pic.twitter.com/LGWLNcTgQq

Union finished 5th last season after an impressive season. They shocked the entire country who didn’t expect them to play this well. They competed in the Europa League as well and beat many big teams on the way. They can be categorised as true underdogs, who had harsh beginnings but managed to beat every obstacle on their way to success. Their story is now being shared and being brought into the limelight. One of the major points being discussed is how can a team with such little experience in the Bundesliga play so well.

How is a team which got promoted to the Bundesliga for the first time in their history, qualified for Europe and finished 5th, all within just three years, beating much bigger teams with much more experience? The answer to this question is that they have a very good manager and dedicated players. They have always been the underdog and always played against a better team. This is why when they play, they play with no fear. Their system lets them outshine and get results against bigger teams.

Under Urs Fischer, Union look well set up for years to come with a rigid 3-1-4-2 to 3-5-2 system. Union Berlin have clear principles and patterns of play starting right from their build-up, wanting to play out from the back and work their way up to the target man. The back-three will usually interact with a narrowness between them, with minimal angles as they circulate the ball. It’s not uncommon for all three centre-backs to touch the ball in build-up phases, as they move the opposition around to find options forward. One of the central midfielders may also drop deep in a 3+2 shape, as the other floats away from the situation. Perhaps most intriguingly, in some moments, one centre-back may also push higher.

Finally, in elucidating this strategy further, initial build-up stages can even look more like a  5-1-2-2, as the fullbacks come in deep. They do this not necessarily to pick up the ball in the wide areas, but to create even more room for the strikers to chase balls into half-spaces.

With a big squad, Fischer has loads of room to move things around, but still keeps a steady set of reliable figures at the forefront. The 23-year-old defender, Paul Jaeckel, is partnered by former Wolfsburg man Robin Knoche, and the solid Timo Baumgartl, who’s more adventurous in getting forward than the other two. Andreas Luthe sits behind them in goal, and has definitely established himself as one of the best keepers in the league.

Captain Christopher Trimmel has also been one of the best right-wing-backs in the league. On the other side, Niko Gießelmann is one of the key creators in the side, and Bastian Oczipka provides a capable understudy. Rani Khedira anchors alongside the solid scorer Grischa Prömel, who excellently times his runs forward. Up front things have been more clear cut, with target man Andreas Voglsammer. With loads of experience in their first eleven, Fischer has achieved great success through relying on older heads, who have been there and done it at the highest level for years. It’s clearly been an efficient strategy to take, and his players have perfectly bought into everything he wants to achieve in their 3-5-2.

Morning, Unioner. Hope you got home safe and sound. Thanks to everyone for last night, from the team to the coaches to the staff and especially the fans who were still singing 15 minutes after the final whistle. Proud to be an Unioner. See you in Köln on Sunday, yeah? pic.twitter.com/4JKnRU2MAK

What’s next for Union Berlin?

Die Eisernen or The Iron Ones have had a great start to the 2022/23 season. They are unbeaten so far and are looking like a major threat. They caught a lot of attention after giving a well-fought performance against Bayern drawing 1-1. Union Berlin have risen from being a club in debt and losing their stadium, from struggling times in much lower divisions to being promoted to the Bundesliga and qualifying for Europe. This didn’t happen overnight. This transition took years and it happened because of a very loyal and committed fanbase, an excellent manager and players who know what they’re doing.

This season might very well be the season where they finally qualify for the biggest competition in club football, the UEFA Champions League. Never say never, considering teams like Leicester City have done it and how well Union Berlin have started the 2022/23 campaign fans can’t count them out. Union Berlin are an inspiration to smaller teams and they keep doing more to prove people wrong. They are not a fluke but a gradual success, transitioning into a proper team with an elite mentality, overachieving every aspect and being a true underdog.