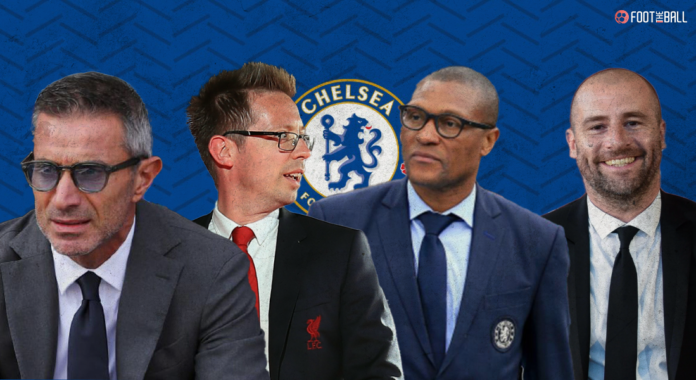 Todd Boehly has been in sole control of transfers this summer – the first window of the new Boehly-Clearlake Capital consortium. And Boehly has been busy with eight new arrivals, including Pierre-Emerick Aubameyang and Denis Zakaria on the summer 2022 deadline day.

There have been six other new recruits with Wesley Fofana and top summer target Raheem Sterling also arriving at Stamford Bridge. With Marina Granovskaia leaving Chelsea in her role as director this summer, there’s a huge hole that needs filling at the Bridge. The club’s co-owner Todd Boehly had temporarily stepped in to help out as the interim sporting director, but wants to find a permanent solution before the January transfer window.

The American owner is widely believed to have done a solid job, although the success of the new arrivals will be better judged next May. He was though left in an awkward predicament with Romelu Lukaku wanting out. He also had to replace two defenders, Andreas Christensen and Antonio Rudiger, who walked away on free transfers.

Boehly though, on the face of it, has done a good job, but he remains intent on adding an executive with football experience.

Marina Granovskaia, who was a close ally of Roman Abramovich, resigned in July. And technical director Petr Cech also departed, along with chairman Bruce Buck at the end of June. It left Boehly standing alone and he is now eager to appoint an experienced sporting director to oversee the club’s future business. And now the club has seen head of international scouts Scott McLachlan depart for pastures new.

Reports state that Boehly wants the new appointment before the January window. But just who Chelsea will go for remains to be seen.

When Michael Edwards went to Liverpool as an analyst, he built a data department that included an astrophysicist, a chess champion and a former researcher on the Higgs boson at CERN https://t.co/Sd4jXU0uWF

High up on that list is understood to be former Liverpool transfer chief Michael Edwards. He stepped away from Anfield last season after 10 years at the club where he made his mark with a number of top signings.

Julian Ward officially took over from Edwards on July 1 and Chelsea were reportedly quick to approach the former Scout. But reports suggested that Edwards turned down a proposal for Chelsea in favour of taking a break from the game.

Whether or not his situation has changed in the 10 weeks since is unclear.

Emenalo, who’s been on a sabbatical for the last three years, may be ready, however. He had reportedly rejected newly wealthy Newcastle United in December. Bringing him back to Chelsea and giving him full powers for the first time would be an intriguing move indeed.

“Andreas Villas Boas once said to him, ‘Why are we signing everyone from Belgium? We should be signing Brazilian footballers’, and Michael said ‘No, the future is in Belgium, not Brazil.”

Michael doesn’t always get the respect he deserves! 👏🏼 pic.twitter.com/esWddbSM6W

Emenalo was one of Roman Abramovich’s most trusted lieutenants at Stamford Bridge, with the owner understood to have made efforts to convince him to stay. His decision to quit, which he had first floated earlier in his time at the Bridge, represented a blow to the owner. Any return for the Nigerian would be a huge plus for the Blues, as they look to get on track under the new management of Graham Potter.

Berta began his career as a sporting director in the boardroom at Italian side AC Carpenedolo in 2002. He then joined Parma in a similar role in 2007 before climbing the ladder and penning a deal with Genoa in 2009.

After a four-year break from the boardroom, Berta was appointed technical director at Atletico Madrid, before becoming sporting director in 2017. He has since worked alongside Diego Simeone, steering the Spanish giants towards two La Liga titles.

Manchester United reportedly made an offer to Andrea Berta before their off-field restructure earlier in 2021.

Mitchell is a former footballer turned recruitment expert, who retired from the game in 2009. The Englishman represented the likes of Wigan Athletic and Milton Keynes Dons, whilst he also embarked on a number of lower-league loans throughout his career.

There has been several interested parties in Mitchell as Manchester United were looking to bring him to Old Trafford to work alongside Ralf Rangnick and Erik ten Hag. He has two years left on his current deal and could still join Chelsea in the future.

He performed eye-catching work with Southampton before a move to Tottenham Hotspur in 2014. Mitchell was credited with the signings of Dele Alli, Toby Alderweireld, Son Heung-Min and Kieran Trippier in his spell in north London. Despite being a hugely successful colleague of Mauricio Pochettino, he did not stay with Spurs and next showed up at German outfit RB Leipzig in February 2018.

According to multiple reports, Chelsea are already in advanced negotiations to sign RB Salzburg sporting director Christoph Freund. The 45-year-old has been in charge of recruitment at this key club of the Red Bull football family since 2015, and is best known for unearthing Erling Braut Haaland. He also played a pivotal role in Salzburg signing the likes of Dayot Upamecano, Amadou Haidara, Patson Daka, Karim Adeyemi, Benjamin Šeško and Brenden Aaronson.

If the Blues are to close the gap at the top of the Premier League, they need to get this next appointment correct. Manchester City and Liverpool, who look like the two outstanding sides in England right now, operate so effectively both on and off the pitch.

The recruitment at both northern clubs has played a major part in their success in recent seasons, so Chelsea can’t afford really to lose any further ground on them.