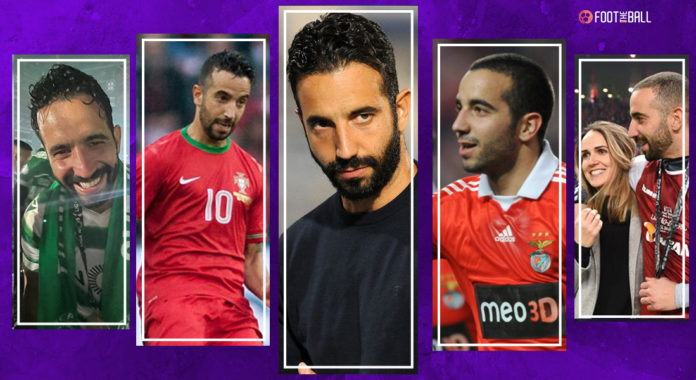 It is a huge compliment when someone calls you the next Jose Mourinho. Ruben Amorim is a 37-year-old manager from Portugal and a former player who currently manages Sporting Lisbon. Back in the day, he used to play as a central midfielder. He racked up 304 appearances throughout his career where he scored 15 times and assisted 24 times.

Post-retirement, he turned his attention toward becoming a manager and began his coaching career at Casa Pia. After being chased around by many top clubs. He was recently linked with a move to Chelsea after they sacked Thomas Tuchel. But he stayed at Sporting and brought a breath of fresh air to the club. He completely changed everything at Lisbon, bringing modern tactics and exciting football. Here are 10 facts you didn’t know about Ruben Amorim.

Sporting Lisbon coach Ruben Amorim is being considered to be the new Chelsea manager.

Graham Potter seen as the frontrunner after interviews yesterday but he is back at Brighton.

Mauricio Pochettino is still in contention.

Chelsea want to run a full process before deciding

1. Always been a Jose Mourinho fanboy

He has always been a big Jose Mourinho fan, even before he started with his managerial career. He has gone on to say only good things about the coach and when once asked about his preference between Jose Mourinho and Pep Guardiola, he didn’t hesitate to say the Portuguese’s name. Although he has got immense respect for Pep, he has always deemed Mourinho as an inspiration.

2. He did an internship under Jose Mourinho

Yes, you read that right. After retiring from club football in 2017, Amorim did an internship with Jose Mourinho during the veteran’s time at Manchester United. It isn’t surprising how much someone can learn by being beside one of the best managers of all time. He has been called the new Jose Mourinho, for their ideologies do seem to match. He, also like Mourinho at Porto, brought back good football and restored confidence at Sporting. What he learned from Jose is priceless and it definitely helped him grow in this field. He was also on Manchester United’s list for their next manager, like many other clubs.

Ruben Amorim was among 3 students from the 2018 edition of High Performance Football Coaching that did their internship under Jose Mourinho,

The Next Mourinho I Presume 👏⏳ pic.twitter.com/S8cxvvJ6sI

3. He is a very well-mannered individual

Ruben Amorim is a very respected personality and you just can’t hate him. He is loved by everyone at the club and he brings positivity along with him. He wants the best for the club and puts it before himself. He is calm and handles things with care and nothing less than that can be heard from staff who have worked with him. He is passionate and he is driven by desire.

4. He retired because of a career-ending injury

Amorim was a respected midfielder with Benfica, for whom he played nearly 100 times, and won an unprecedented quadruple of league titles. He also played 14 times for his country. But, he was very injury prone. When he was 32 years old, he suffered a career-ending anterior cruciate ligament injury and was forced to retire. He later decided to pursue management.

5. He is the fifth-most expensive manager in history

Ruben Amorim was unveiled by Sporting in March 2020. However, there were a lot of raised eyebrows with the decision to pay the £8.65m buyout clause of a manager who, three months before, was still working in the Portuguese third tier with Braga’s B side and was yet to complete a full season in the dugout. This was called “madness” by club legend Luis Figo. The fee made him the fifth-most expensive coach in history.

6. He completely turned it around at Sporting Lisbon

Sporting CP were crowned champions of the Portuguese top flight after a gap of 19 years in the 2020/21 season. Ruben Amorim was at the core of such a great season. At the age of 32, Amorim hung up his boots and began pursuing a coaching licence with the Lisbon Football Association. After a few runs with different teams, he managed Braga, from where his services were secured by Sporting CP.

Amorim has typically utilised a 3-4-3 formation. He has claimed that he does not want to overcomplicate matters by giving his players a lot of strategic instructions and that he has infused the squad with some automated motions. One of Amorim’s signature moves is for the men to block the centre and compel the opponent to make critical plays to the wings.

Sporting netted 65 goals that season, somewhat fewer than Porto’s 74, which was a testimony to their excellent goal-scoring ability, having produced well beyond their xG of 36. They outperformed their xG on both sides of the field, conceding 20 goals from 16.5 xGA, which ranked them the best defence in Europe’s top six divisions – only a handful of teams have conceded fewer than 25. Sporting, on the other side, had a +45 goal differential while having a +20 goal differential based on xG data, while Benfica (+42) and Braga (+20) have lower statistics.

Sporting Lisbon fans jokingly refer to Amorim’s press conferences as “the best moment of the week”. When Ruben Amorim speaks about how successful the Portuguese giants have been lately, it just highlights how much he is revered by the green half of Lisbon. The club’s supporters have even started a social media account where they count down the days to his news conferences.

8. He is keen on collecting Yeezy sneakers

Even though most of his earnings came from being a professional footballer, he also earned millions of dollars from just collecting Yeezy sneakers or just sneakers in general. He bought valuable sneakers in good condition and traded them for more money, hence making a hefty profit on them. He is passionate about this and likes to do this on the side.

He achieved something that other managers, much more experienced than him, failed to do. He went from not knowing much about management to interning with the great Jose Mourinho, coaching Braga and then helping Sporting win their first league title in 19 years. All this happened in 5 years, which is considered a short time. He already has so much experience and big clubs want him. It wouldn’t be so if he wasn’t a fast learner and dedicated to his job.

10. He always shows his most genuine self to the media

When he speaks to the media, he shows his true side and his most genuine self. He speaks not just as a manager but as someone who actually cares about the club. He is against being media trained and wants to always speak his mind. His words hold weight and do have meaning, which is why everyone waits for his press conferences. The way he has transformed the club and made everyone fall in love with him and his style of play is irreplaceable. No one could have done a better job than him.