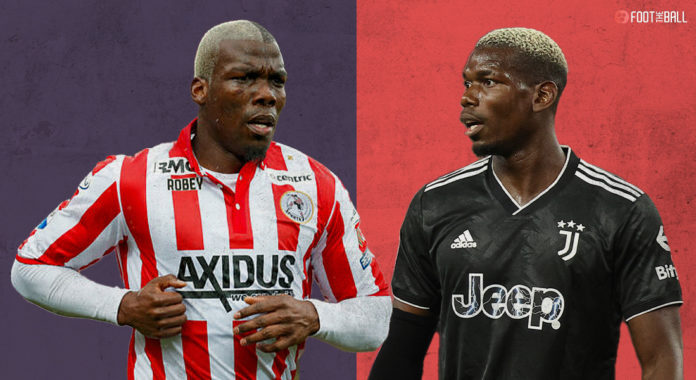 Former Manchester United and current Juventus star Paul Pogba has been involved in an extraordinary saga regarding blackmailing and kidnapping. All this has been allegedly being pinned to none other than the elder brother of Paul Pogba – Mathias Pogba.

Mathias Pogba is now arrested by French police and will serve time in jail for the duration of the investigation over the ongoing blackmail probe. Three other people are also in custody along with Mathias, according to multiple sources.

French police have opened an investigation into claims by World Cup winner Paul Pogba that he is the victim of a multi-million euro blackmail plot by gangsters involving his brother, as per multiple reports.

Mathias Pogba has denied taking part in extortion attempts against his brother. Mathias Pogba’s lawyer Richard Arbib said in a statement last week that his client wants “more than anything else” to ease the situation with his brother.

Mathias Pogba might be in provisional detention but that has not stopped Paul Pogba’s older brother from releasing his latest slew of allegations against the Juventus and France midfielder. The latest chapter of the saga unfolds as the younger of the two brothers. and Juventus and France midfield star, remains under police protection while an investigation into attempted blackmail is underway with the older or the pair of siblings provisionally detained.

The saga also takes another twist after it involved Paul Pogba’s France international teammate Kylian Mbappe and a witch doctor. With so much revolving around the life of the Pogba brothers, FootTheBall breaks down the elements around this saga with all the latest updates.

Who is Mathias Pogba?

Mathias Pogba is the elder brother of Juventus midfielder Paul Pogba. He is a Guinean professional footballer born on 19 August 1990 in Conakry, Guinea.  The Guinean international is a striker who recently played for Championnat National 2 side Belfort in the 2021/22 season.

Mathias Pogba has played for 13 clubs during his senior career starting from Quimper in France. After that, the Guinean striker followed in his younger brother’s footsteps to England where he had spells at Wrexham and Crewe Alexandra. He later played for clubs like Italian side Pescara, then later moved to England again for a short spell with Crawley Town.

Wrexham has some rich history, and all this is well documented in ‘Welcome to Wrexham‘

In his latest leak, Mathias reveals that his release of around 30 video messages was prepared in advance should he be unable to communicate himself.

Paul Pogba’s eldest brother Mathias released a video prior to the new video; online in 4 languages alleging the Juventus midfielder of multiple disturbing sagas. Mathias also alleges Pogba wanted to “really wanted to shut me up completely to lie and send me to prison.”

Mathias Pogba, 32, promised “great revelations about his brother Paul Pogba and his agent Rafaela Pimenta“, who took over as head of the company of former agent Mino Raiola who died in April 2022. He said the “whole world, as well as my brother’s fans, and even more so the French team and Juventus, my brother’s team-mates and his sponsors deserve to know certain things”.

It had also been said by Mathias that Paul Pogba asked a witch doctor in his family circle to cast a spell on his France team-mate and PSG star Kylian Mbappe. No proof or motive for  Paul Pogba’s alleged witchcraft has been revealed by Mathias.

“Hahahaha, what I expected to happen has happened: my little brother is finally starting to show his true face. Since it was he who started talking, to lie to the police and who brought out the information, you can’t blame me. Paul, you really wanted to shut me up completely to lie and send me to prison, I suspected it.

“Now it’s true, my version of the facts actually happened and unlike you, I have enough to prove my words and your lies. I’ll tell you again: brother, manipulating people is not good! It’s not about money: You implicated me in spite of myself, I almost died because of you, you left me in a hole and you want to play the innocent one.

“When everything is said people will see that there is no bigger coward, bigger traitor and bigger hypocrite than you on this earth. Kylian, now do you understand? I have no negative feeling towards you, my words are for your good, everything is true and proven, the witch-doctor is known! Sorry about this brother, a so-called Muslim deep in witchcraft, it’s never good to have a hypocrite and a traitor near you!”

“Hello all,” he began. “I am Mathias Pogba. If you are watching this video, it is because my brother Paul has found a way to shut me up — either by targeting me directly and physically, or my discrediting me by accusing me of things I have not done. Maybe even through tricking the police like he has done in the past with my cousin, with the goal of silencing me.

“There is a big chance that I am not the only one, because he is in the process of silencing everybody who could reveal things by using his celebrity status, money, relationships, and all necessary means. That is why I have made this video with the goal of revealing all about my hypocritical and manipulative brother regardless of what happens to me. This bad, arrogant, and criminal man will be exposed.”

“First, there is the family and how he behaves towards us,” said Mathias. “The truth is very different to what you see on camera because the reality is that he has turned his back on his family, without reason. A family that did nothing bad to him. On the contrary, he was born into and raised by an incredibly united family, very united, and one which has always supported and encouraged him.”

“At Paul’s request, the witch doctor was asked to neutralize Kylian,” said Mathias. “At that time, he was enjoying a rapid rise to the top and was overtaking Paul in terms of fame. It was bizarre for Mam’s to see that Kylian was a shadow of his usual self that day against a largely reserve team. The problem was that Paul was doing everything to get closer to Kylian in the press, saying that he was his friend, calling him and arm in arm all the time. The reality was that Paul was resorting to witchcraft to sabotage these games.”

Following the release of the video by Mathias Pogba, his brother Paul Pogba released a statement, also signed by agent Rafael Pimenta, his mother and lawyers, which said the posting of Mathias’ videos “are unfortunately no surprise”.

“I confirm that an investigation was opened on 3 August 2022 on the charge of attempted extortion by an organised criminal gang. The investigations have been entrusted to the OCLCO,” the prosecutor’s office said.

“They are in addition to threats and extortion attempts by an organised gang against Paul Pogba,” read the statement. “The competent bodies in Italy and France were informed a month ago and there will be no further comments in relation to the ongoing investigation.” It is understood that the gang involved is alleged to include Mathias, Pogba’s childhood friends and other men.

Kylian Mbappe has reportedly called brothers Paul and Mathias Pogba, since reports were out that the PSG striker had a spell cast on him through the former Manchester United midfielder. Mbappe has been called out by Mathias Pogba on several occasions before where he dropped a video on Twitter stating that, Paul Pogba used a witch doctor to curse France’s star striker.

Mathias also alleged that “Ibrahim”(the witch doctor) was used to curse teammates including Kylian Mbappe during a UEFA Champions League tie between PSG and Manchester United which Paul’s Red Devils advanced in. An intermediary named “Mamadou” who is currently detained was allegedly asked to do tasks such as burying pieces of paper under the field to cast curses while a swarm of butterflies before the UEFA Euro 2016 final and the 2017 UEFA Europa League final were also cited.

Now according to multiple French outlets, Mbappe made a phone call to both Pogba brothers to get clarity on the situation. Kylian made the phone call from the perspective of getting his name cleared from the scandal, which was involved unnecessarily according to the former Monaco wonderkid.

All this will come to an end eventually, although it would be in the best interests of both Paul Pogba and Kylian Mbappe to discuss and solve the matter immediately. With the World Cup coming up, it is quite a delicate situation which could even cost them their spot at France’s final 23-man squad, which they would want to avoid.