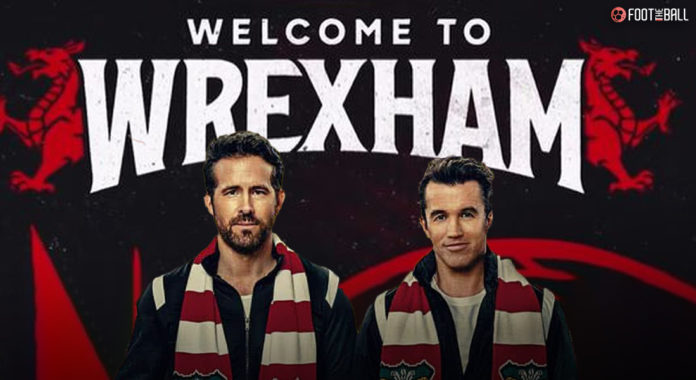 Welcome To Wrexham is a giant road sign you’ll now see when crossing the Welsh border from English Cheshire, just like the famous giant Hollywood sign in the hills looking over Los Angeles.

While “Ryan Reynolds and Rob McElhenney buy a football team” sounds like the pitch for a big screen comedy, it’s a true event that is making for a new TV documentary series.

The documentary will follow McElhenney and Reynolds’ arrival in the town, the media frenzy around them, their redevelopment of the stadium, and the inner workings of the soccer team itself.

A soccer fan or not, everybody was surprised to hear Hollywood superstars Ryan Reynolds and Rob McElhenney had turned their heads to soccer. In particular, towards a small soccer club in northeast Wales.

These 2 superstars might have taken the challenge of turning Wrexham’s fortunes – but the real challenge was in Arteta’s hands to bring Arsenal back to the top in Arsenal: All or Nothing

It was also reported that at first, the Trust initially rejected an offer of a takeover by an intermediary but changed their minds after learning it was McElhenney and Reynolds. The acting duo turned co-owners purchased the club for £2 million ($2.75 million).

Rob McElhenney. Ryan Reynolds. Wrexham, Wales. To this town, football is not life and death. It’s more important than that. Watch the OFFICIAL TRAILER for FX’s Welcome to Wrexham, an original documentary series. Premieres August 24th on FX. Stream on @Hulu #WrexhamFX pic.twitter.com/UNLhyUmPl7

In September 2020, Reynolds and McElhenney teamed up to purchase Wrexham Football Club (Wrexham A.F.C), a non-league soccer team. Now, their remarkable journey is being brought to the small screen with the documentary Welcome to Wrexham. FootTheBall have you covered here regarding all the details you need to know about this most-anticipated documentary which is a combination of both Hollywood and Football.

What is Welcome to Wrexham

Welcome to Wrexham sees the celebrities navigate the challenges that come along with running the third oldest professional football club in the world, which has little success for decades. The documentary will introduce the world to the small Welsh soccer club and the arrival of two Hollywood superstars with dreams of turning things around for the historic club. Before the deal, the club was owned by the Wrexham Supporter’s Trust, a fan-operated company.

Ranging from Hollywood to Wales, the docuseries follows the men who undergo a crash course in football club ownership and the tightly-tied fates of the team and town who are counting on them to bring some hope and change to the community. At the time of Reynolds and McElhenney’s takeover, Wrexham A.F.C. was on the brink of collapse, with the trust admitting the club was experiencing a “threat to the[ir] continued existence” following the COVID-19 pandemic.

They're getting a crash course in football club ownership. From Rob McElhenney and Ryan Reynolds comes FX’s Welcome to Wrexham, an Original documentary series, streaming 25 August on #DisneyPlusZA pic.twitter.com/CCpCZpaefp

The documentary filmmakers of Welcome to Wrexham haven’t let slip too much about what to expect yet, but we know both Ryan Reynolds and Rob McElhenney intend to be very hands-on owners and immerse themselves in the small Welsh community of Wrexham.

The show also tracks the dreams and worries of Wrexham, a working-class town in north Wales, UK, as the Hollywood stars take ownership of the historic but struggling football club. Rob and Ryan, however, have no experience in football (soccer) or working with each other. But both are serious about their Wrexham AFC investment, genuinely wanting to improve the club and do right by the town and engage with local supporters.

Welcome to Wrexham is the sports documentary you do not want to miss this summer.

FX made a two-season commitment to the series back last year. It is due to launch on FX on August 24, streaming next day on Hulu in the US and premiering internationally on Disney+ on August 25.

Also read – Everything you need to know about Argentina: All or Nothing

Where to watch Welcome to Wrexham

On Thursday, August 25, all episodes will be available to stream via FX on Hulu in the U.S. and Disney+ in the U.K. which means fans can watch all of the half-an-hour episodes back to back if they wish.

There is an uplifting new trailer for Welcome to Wrexham out now. In the trailer, audiences catch a glimpse of Reynolds and McElhenney arriving at Wrexham and talking to fans. It’s still one of the quirkiest stories in sport. A trailer has dropped for Welcome to Wrexham, the FX and Disney+ docuseries about Rob McElhenney and Ryan Reynolds’ takeover of a struggling Welsh soccer club.

Reynolds explains to the filmmakers “it’s an underdog story” and in another moment of the trailer explains “it’s about interconnectivity, between the club and the community.”

In 2020, McElhenney and Reynolds teamed up to buy the Red Dragons in the hopes of turning the club into a team the whole world could root for. The worry? They have no experience in football or working with each other. From Hollywood to Wales, from the pitch to the locker room, the front office to the pub, Welcome to Wrexham tracks their crash course in football club ownership and the inextricably connected fates of a team and a town counting on two actors to bring some serious hope and change to a community that could use it.