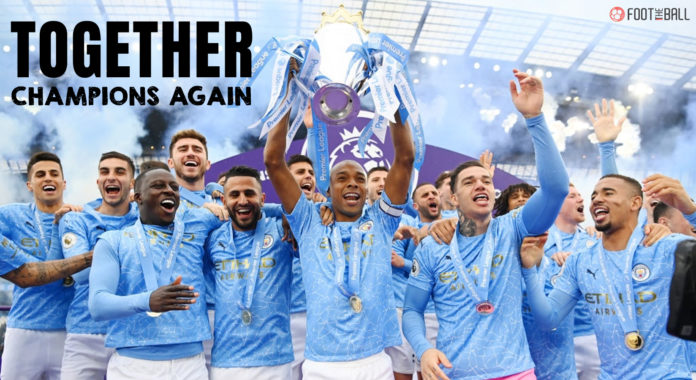 Pep Guardiola is an admirable personality. From his champion mentality to his passion for the game, nothing comes second best. But what makes him stand out from the crowd are his sensational ‘Pep’ talks.

A similar kind of dressing room message was passed from the Spaniard to his Manchester City players where he stated that: “Do you know why Messi is the best player I’ve seen in my whole life?” he said, “because he is a competitor, he’s an animal.

Also read: Managers with most Trophies in their career

This message surely charged the Manchester City players as they eventually went on to win that Champions League game against Club Brugge 5-1. All of this is shown on Manchester City’s latest exclusive fly-on-the-wall documentary after the Sky Blues retained the Premier League title in 2021/22 and won their 4th in 5 years.

Watch the full episode six of Together: Champions Again! ▶️

What is Together: Champions Again?

Together: Champions Again! is the sequel to the iconic feature-length film, Together, which captured the final 45 days of the 2020/21 campaign. This latest edition from City Studios covers everything behind the scenes to give Manchester City fans some exclusive content.

This series covers the true meaning of the title ‘Together’ where City Studios have covered the journey of clubs’ back-to-back titles in 2020/21 and 2021/22.

If you find these docuseries interesting, wait till you watch All or Nothing: Germany.

The first episode of a seven-part series was released on 27th July and is exclusively available on CITY+, with all episodes now available to watch. The docuseries with the famous Guardiola message is also available on the official Man City Recast channel.

Where to watch Together: Champions Again

As mentioned, the docuseries is exclusively available on Manchester City’s official TV channel, which is CITY+. Episodes One, Two, Three, Four, Five, Six and Seven of the latest production from City Studios that follow Pep Guardiola’s side on their dramatic journey to back-to-back league championships are available to watch exclusively on Recast as well.

The trailer is already out for Together: Champions Again! and so all the 7 episodes of this piece delivered from City Studios.

With 2 consecutive Premier League titles under his belt, Pep Guardiola will surely be aiming to repeat what only one manager has been able to achieve so far. Sir Alex Ferguson had won 3 consecutive titles with Manchester United which no other manager being able to match that, and Pep will surely have his eyes set on that record now!