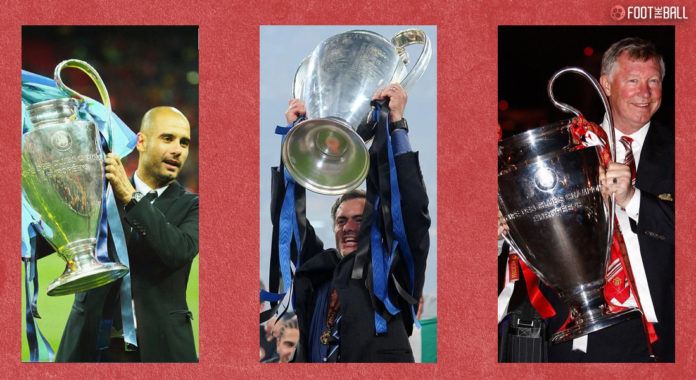 Football as a sport is nothing without the influence of the managers and their tactics. Their approach towards the game has kept the sport evolving throughout the years. Be it a legendary manager like Sir Alex Ferguson or a more recent figure like Pep Guardiola, these figures have transformed the way the game is played.

Rightly so, these managers have also tasted a lot of success with their respective teams as well and some of them have gone on to win most numbers of trophies in their trade. A trophy haul is most certainly an accurate method to measure success. The only possible argument against the measure of success by trophies is when managers inherit a good squad.

Here we list down the managers with the most trophies in football. Some of the managers in this list are not active anymore but there’s no denying their contribution to the game.

Arsenal’s legendary manager, Arsene Wenger is a Frenchman who won 21 major titles during his managerial career. The French coach has managed Monaco, Arsenal, and Nagoya Grampus. But he achieved major success during his time at Arsenal. Arsene Wenger has earned the nickname “The Professor” by the English and French media to reflect not only his tactics but also his demeanour.

Speaking of Arsenal and Arsene Wenger: Here’s everything about All or Nothing – Arsenal

Wenger had always committed himself to developing young talent at the teams he has coached. The Frenchman started his managerial career in 1987 with Monaco. He bought several new players and led Monaco to a French Division 1 league win in its first season itself, that too with a very comfortable lead.

Arsene Wenger joined Arsenal in 1992, where the dream run initiated. Wenger has won a total of 17 titles with Arsenal, and a cumulative of 21 titles, winning 2 each with Monaco and Nagoya Grampus. Arsene Wenger is truly one of the most successful managers of all time and he is also among the coaches with the most EPL trophies.

The Italian coached at Inter, Juventus, Bayern Munich, Red Bull Salzburg, Benfica and the Irish national team. Most of his 23 titles came with Juventus, who he coached in two separate spells. With the Old Lady, Trapattoni won almost every title barring the Supercoppa Italians. The list of honours included six Serie A titles, the European Cup, UEFA Cup and UEFA Cup Winners’ Cup.

2- the German trio of Inter Milan
Lothar Matthaus, Jürgen Klinsmann, and Andreas Brehme
Together the trio won serie A once, supercopa italia once, and the UEFA cup once under coach Trapattoni pic.twitter.com/8w15gGr9jl

Mourinho has had extraordinary success in the 21st century. He’s won the Champions League with both Porto and Inter Milan, while he’s won three Premier League titles with Chelsea. Mourinho has also recently added the Europa Conference League title to his trophy cabinet with Roma.

Ottmar Hitzfeld started his managerial career in Switzerland, but his most prominent success came in the German Bundesliga. The German managed teams like Borussia Dortmund and Bayern Munich, winning the Bundesliga seven times and UEFA Champions League twice for both clubs. Overall, the tactician ended up with 25 trophies in his career.

Known as “Felipao” in Brazil, Luiz Felipe Scolari started his managerial career in 1983 in his homeland, but his breakthrough came almost a decade later when he won six titles in only three years, including the 1995 Copa Libertadores.

Scolari has managed various football clubs and national teams during his managerial career.  In total Scolari has managed 20 teams with a win percentage of 60, making him one of the most successful football coaches. The highlight of Scolari’s career is winning the World Cup in 2002 with Brazil, where Brazil defeated Germany 2-0 in the final. Scolari also managed the Portuguese national team, where he continued his success by reaching the Euro 2004 final and the 2006 World Cup semi-final.

Felipe Scolari returned to the Brazilian national team for the 2014 World Cup. Brazil’s campaign was successful until the semi-final where the horrendous 7-1 defeat against Germany marked the worst day of Scolari’s career.

Jock Stein is an outright legend in the Scottish football sphere. The legendary manager won all of his 26 titles with Celtic, in a career that spanned 13 years. He also managed teams like Leeds United and the Scotland national football team. Jock sadly passed away in 1985.

Alfredo Di Stefano meets Jock Stein before the great man's testimonial game in the Bernabeau for Real Madrid against Celtic in 1967. pic.twitter.com/0PqexFVYLs

The Ukrainian started his managerial career in 1968 with Dnipro Dnipropetrovsk. But the first major success came in 1974 at his lifelong club, Dynamo Kyiv where he won both the league and Soviet Cup.

Valeriy Lobanovskyi is recognized for being one of the inventors of the major football-playing style known as “Total Football” in the 1970s. He was also among the first coaches who implemented the false-9 position which was then used by Pep Guardiola and Jurgen Klopp in modern-day football.

One of the most successful coaches in the modern era, Guardiola is third on the list of most trophies won by a manager in football history with 31 titles.

The Spaniard’s trophy-laden spell began with his boyhood club Barcelona, where he won the Division trophy with Barcelona’s B team in June 2007. The following year he was thrust into senior management and quickly shot to stardom by winning the club’s first-ever treble – UEFA Champions League, LaLiga and Copa del Rey.

Mircea Lucescu is the second-best among the soccer coaches with the most trophies. He started his playing career in 1963 with Dinamo București and went on to feature for the team for the next 14 years.

As a manager, the Romanian was an instant success with the Romanian national team where he led his homeland to their first-ever appearance at the UEFA European Championship finals.

Lucescu had a long career in Italy, where he coached some big clubs such as Pisa, Brescia, Reggiana, and Inter Milan. He then took charge of the Turkish club Galatasaray, with whom he won the UEFA Super Cup against Real Madrid in 2000.

Lucescu managed a total of 6 clubs in 834 games overall with a total win percentage of 65.8 and 32 trophies under his belt, making him one of the coaches with most trophies in Europe.

Sir Alex Ferguson, over the course of his legendary coaching career, won a whopping 48 titles, the most trophies by a manager in football.

The Scottish manager began his management career with East Stirling, at the age of 32. It was short-lived as he signed on his first full-time job with St Mirren in October 1974. It was during this time that he won his first title – Scottish Football League First Division in 1977.

In 1986, Sir Alex Ferguson left Scotland to join United, replacing Ron Atkinson. Four years into his stint as MUFC boss, Ferguson won the FA Cup in 1990 and followed it up with a FA Charity/Community Shield (shared with Liverpool), UEFA Cup Winners’ Cup and UEFA Super Cup (both in 1990-91).

Ferguson ended Manchester United’s 26-year wait for a top-flight title in the inaugural Premier League season of 1992/93 and went on to win a record 13 Premier League titles until his retirement at the end of the 2012/13 campaign.