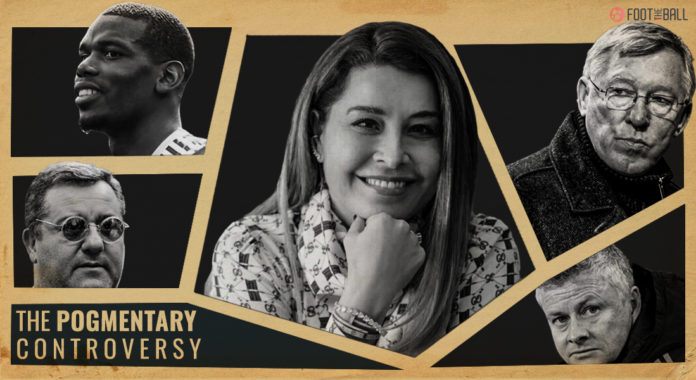 Born ready. Two words that are extremely overused in the world of sporting parlance. Therefore, it was no surprise that fans had mixed reactions to the new Amazon documentary around Paul Pogba, titled ‘Pogmentary: Born Ready.’ The film traces the journey of Pogba over the past couple of seasons.

However, it mostly focuses on his personal and family life, leaving out some key moments on the pitch. Therefore, fans are not privy to what happened towards the end of the 2021-22 season or the supposed meetings with Ralf Rangnick.

Moreover, the bulk of the action highlighted his successes with the French national team. Pogba has officially left Manchester United, and is close to rejoining Juventus. However, the reverberating effect of Pogmentary will linger for a while.

Pogmentary had several nice and wholesome moments. The relationships among the different family members were in sharp focus. Pogba’s connection with his wife Zulay, mother Yeo Moriba, and brothers made for nice viewing.

They talked about how life away from football is, the dynamics of their personal lives, Pogba’s early years, and the importance of family.

However, there was very little footage or talk about Pogba’s game on field or discussing his performances. One of the earliest mentions was the penultimate match of the 2020-21 season against Fulham.

Pogba talked about how he was tired of losing, but Manchester United could only end up with a draw. The next major talking about football was France at Euro 2020. One of the favourites for the tournaments suffered a shock exit in the round-of-16.

Pogba: “Juve really helped me, I proved to people I really belonged there. I was young when I got there, and I became a man there.”

There was intense focus on France scoring thrice against Switzerland, including Pogba’s goal and the dance that followed. As expected, the film glossed over the goal from the Swiss, and the extra-time period.

The new Paul Pogba? Aurelien Tchouameni has been on the rise and here the facts you have to know about him

In the later episodes, there was talk and visuals of Pogba’s modeling pursuits, his brand endorsements, relationship with his two sons, and future plans. As expected, there was very little actual football being talked except the constant undertone of transfer speculation.

There was a brief mention of the big fight between Pogba and Jose Mourinho. It mostly had to do with Mourinho complaining to Mino Raiola about how Pogba was vacationing in Miami, when Pogba was injured.

However, Pogba ended by clarifying that things are cool now if they met. Speaking of Raiola, he is an extremely on brand personality in the documentary, alongside Rafaela Pimenta.

The two figures who are not directly connected to Pogba’s personal life. Both Raiola and Pimenta had prominent roles in the film. The late super agent was extremely blunt in his assessment of what drives Pogba. Raiola was one of the most natural presences, and he shed light on what went on behind the scenes.

Mino Raiola had a starry cast of clients and here are his best ones!

Paul Pogba: “ I was shocked. I was like “okay”. We got our stuff and he said we’re leaving. And we left. Sir Alex Ferguson probably never experienced something like this in his career.” [the pogmentary, @PrimeVideo] https://t.co/rp7dnU3Wru

There was talk of what happened during Pogba’s first departure from United. According to Raiola, there was a big difference in the valuation of Pogba which forced the player to leave for Juventus.

It was clear that there was bad blood between the club and Raiola, which only worsened following Pogba’s return. The controversy surrounding Pogba’s comments on how the club made no “real offer” to keep him has been burning for a few days.

Paul Pogba: “My thought process is to show Manchester United that they made a mistake in waiting to give me a contract”, on the Pogmentary via @TheAthleticUK. 🚨📑 #MUFC

“How can you tell a player you absolutely want him and offer him nothing? I’ve never seen that”. pic.twitter.com/e8ywMiO2g8

It is difficult to know what Pogba was actually offered, though reports have mentioned a substantial package. Nevertheless, what’s done is done and Pogba has left. The other main character in this world of player transfer and decision was Rafaela Pimenta, Pogba’s advocate.

She has taken up a bigger role since the death of Raiola, and her strong presence made it clear where the priorities lie. Pimenta is a major influence on anything Pogba does professionally.

The Pogmentary (🤮) is Pogba's attempt to rewrite history. He went public with his desire to leave in the summer of 2019. Never once did he publicly change that stance, or even really hint at it. He was fit for just over 50% of Premier League games since the start of 19/20 #mufc

The rumours surrounding the midfielder in 2021 took her by surprise, and she was defending Pogba more often than not. Therefore, there was no moderating or neutral figure who could give an objective opinion of what actually transpired in these situations.

Given that the documentary was surrounding Pogba, it was expected that most of the interviewees will be in his favour. However, there was hope that Amazon would bring in some journalists or former teammates to get their perspective. That was sharply missing throughout the five episodes.

The 'Pogmentary' reveals that United twice offered him new deals in excess of the existing £290,000-a-week terms.

Truth be told, Blaise Matuidi was there, but his conversations also surrounded family and children. There was mention of Antoine Griezmann, one of Pogba’s closest friends on the national team.

Again, there was no talk directly with the Atletico Madrid star. The fact there is no one personality who could shed some insight on what was actually happening. All the film relied on was Pogba, and his interests, fascinations, hobbies, etc.

😠 “When someone isn’t earning their wages and does a documentary, it sums it up!”

Therefore, it is safe to say that the film could have been done much better. This was more of a series which focused on bits of his career rather than a documentary per se. Even the talk surrounding his childhood days involved the rejection from Clairefontaine and growing up in tough conditions.

There was nobody connected to Manchester United or the current French national squad. Therefore, this whole “documentary” was about airbrushing Pogba’s image in the media, rather than an in-depth look.