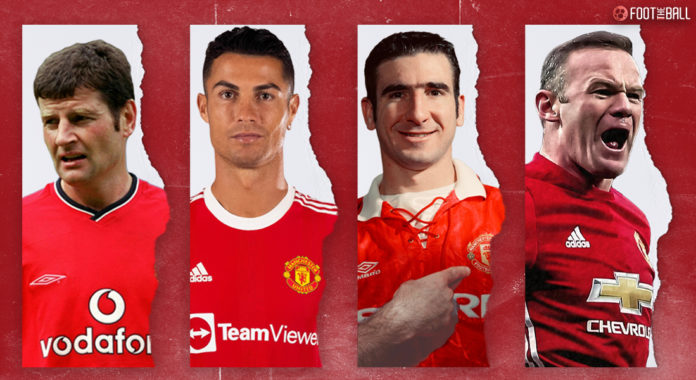 Manchester United have had some of the best players in world football over the years. The Red Devils have a rich culture of silverware and history, which has been brought by an excellent array of footballers. They have come from all over the world to succeed and play at the Theatre of Dreams.

Manchester United have named an academy graduate in every matchday squad since 30th October 1937.

Despite the recent misgivings in the transfer market, United have mostly been hugely successful in signing the best players or turning young talents into world-beaters. Apart from its famed youth academy, the club has a proven record of bettering every player.

Therefore, it’s important to know about the past as United enters a new era. FootTheBall brings you the 10 best transfers of all time and how they fared at the club.

The only player on the list who is still going. Ronaldo is a cultural phenomenon unto himself, and his goal-scoring records need no introduction. It was Sir Alex Ferguson who made the move to sign a 18-year-old Ronaldo back in 2003.

🔴 An 18-year-old Cristiano Ronaldo signed for @ManUtd on this day in 2003! ✍️#UCL pic.twitter.com/idMml48IbE

Few would have imagined he would go on to be the global superstar he was with Manchester United. Ronaldo was a beast in attack, racking up 84 goals in 196 games before leaving for Real Madrid for a world-record fee. United won three Premier League titles, the Champions League, and the Club World Cup.

Cristiano Ronaldo is the greatest player the Premier League and Manchester United have ever witnessed. 🥇🔥 pic.twitter.com/QMhNQ21yTC

A game-changing transfer for only £1.2 million. Eric Cantona was a burgeoning star with Leeds United in 1991, before joining United.

One of the best pieces of business done by Alex Ferguson as Cantona became an instant legend. Four league titles in five years, with two of them being league and FA Cup doubles.

In his first full campaign, King Eric top-scored for United, picked up two trophies and was named PFA Players' Player of the Year.

A game-changer on and off the pitch. pic.twitter.com/uy8Zignn52

His demeanor, unflappable confidence in himself, and the scoring record were essential for United establishing their dominance. Though the Crystal Palace incident took some shine off his career, it was an unqualified success in the long run.

The Serbian tank came to United in 2006 after protracted negotiations. Vidic immediately formed a world-class partnership with Rio Ferdinand. The pair of them remains one of the best centre-back duos in the history of European football.

Vidic was known for his intense commitment to the pitch and his team. There was nothing that could faze him, and he was always ready to give his all for the team. He was club captain during his final years at the club, as United kept winning trophies.

A player signed for just £625,000 from Oldham Athletic, who went on to feature more than 400 times. Irwin was an ever-present for Alex Ferguson’s side in the 1990s, racking up seven Premier League titles, three FA Cups, and the Champions League in 1999.

Irwin’s overlapping runs down the left and crossing ability made him a perfect fit with the young Ryan Giggs. Irwin would be another crown jewel in Ferguson’s history of brilliant signings.

The forever underrated midfielder was a true virtuoso for Manchester United. Carrick had an excellent passing range which was supremely complemented by his vision and reading of the game.

The former Spurs midfielder was unlucky to miss out on regular opportunities with England but were a mainstay at United.

Alongside Paul Scholes, Carrick was vital to United’s success in the late 2000s and early 2010s. Moreover, he was also an assistant manager under Ole Gunnar Solskjaer and was briefly served as the interim manager too.

The record goal scorer for Manchester United with 253 strikes across all competitions. Rooney was a sensational forward, who burst onto the scene with Everton as a teenager. Alex Ferguson was convinced of his abilities and Rooney repaid the faith spectacularly.

Furthermore, he was the PL Player of the Season for 2009-10, and Rooney has transitioned to a hardy manager with Derby County now.

The veteran Dutch goalkeeper was one of the smartest signings of the Ferguson era. Van der Sar was a champion with Ajax, and he made United a dominating defensive side. With Ferdinand and Vidic in front of him, Van der Sar was a mammoth figure. He was a vocal presence in the penalty area and regularly was unbeatable from crosses.

Edwin van der Sar joined Man Utd at the age of 35 & went onto become a club legend winning 11 trophies with the club.

He holds the Premier League record for the longest time without conceding a goal (1,311 minutes)

He was named UEFA Club Goalkeeper of the Year in 2009. pic.twitter.com/hgM3HXwn2H

Van der Sar’s penalty save from Nicolas Anelka in the 2008 Champions League final. Moreover, he still holds the Premier League record for most consecutive clean sheets with 11. A truly smart signing in an era of superstars.

The defensive glue of United through the 2000s and early 2010s. Ferdinand was a costly buy from West Ham United but repaid the full value and more. Like Vidic, Ferdinand was an irrepressible force in United’s backline over many years.

His towering presence and long legs allowed Ferdinand to cover large distances, alongside competing in aerial duels. Ferdinand was a fixture of United under Alex Ferguson and is surely one of the best defenders to have played in the Premier League.

The no-nonsense, highly combative midfielder signed from Nottingham Forest in 1994. Keane was not the most adept in terms of speed or skill, but his leadership was unmatched. He was the heartbeat of the side, and his regular clashes with opponents fired up United.

OFFICIAL: Roy Keane has been inducted into the Premier League Hall of Fame alongside Shearer, Henry and Cantona:

Moreover, Keane was known for demanding the highest level of gameplay from his teammates. Alex Ferguson trusted his captain fully, who enjoyed immense success year after year.

Therefore, it was no surprise that United fans still see him as a revered figure, someone whom the current side can use. Moreover, he has also been inducted into the Premier League Hall of Fame.

Just for how cheap he was and how great he turned out to be, Schmeichel is a legend. £530,000 paid to Brondby got the big Danish goalkeeper to Old Trafford. Schmeichel was the best goalkeeper in the Premier League during his several years for United.

He was UEFA Goalkeeper of the Year three times, alongside winning the PL Player of the Season in 1998. Furthermore, Schmeichel was a five-time winner of the league, with countless other trophies to boot.

Moreover, Schmeichel was a key contributor in the treble-winning season of 1999. Therefore, it was no surprise that United struggled to find a replacement for him till Van der Sar arrived.