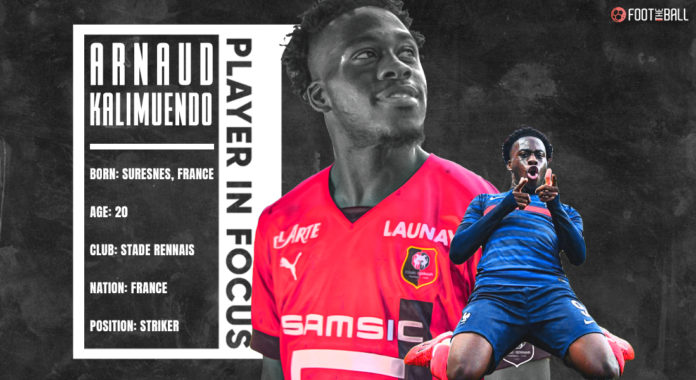 PSG have one of the most enviable collection of strikers in the world. Kylian Mbappe, Lionel Messi, and Neymar would be in the dream teams of most fans. However, there was a certain 20-year-old who was aiming to make an impact.

Arnaud Kalimuendo had been with the PSG senior squad since 2020 and spent the next two seasons with RC Lens. He was back with the Parisians and had been on fine form in the preseason.

PSG are interested in bringing Nordi Mukiele. Here’s why the Frenchman would be an astute signing for all seasons

Kalimuendo generated considerable interest from across Europe. There are a lot of things to like about the forward and he is definitely a talent for the future. Although due to a lack of guaranteed first-team opportunities in the French capital, The French forward decided to seek pastures new. Kalimuendo has now officially joined Rennes for a fee around €25m.

Arnaud Kalimuendo joined PSG’s youth academy in 2012 from FC Saint Cloud. He made his debut as a 16-year-old with the U19s in the UEFA Youth League. The side was then led by Thiago Motta, and Kalimuendo soon started showing his immense potential.

He inked his first professional contract in 2019, before making his debut in September 2020. However, that would be his lone appearance for PSG that season. Kalimuendo was loaned out to Lens, where he would be a regular part of the squad.

His strong performances raised hopes of featuring regularly with PSG, but he was out on another loan to Lens again in 2021-22. Kalimuendo has a sharp eye for goals and is constantly found in dangerous areas.

Who is Joao Sacramento, the second-in-command to Christophe Galtier, and one of the most coveted young managers?

His low centre of gravity makes him difficult to stop once he gets going. He has one of the rising stars in French football over the past few years, and for good reason.

Lens greatly benefitted from Kalimuendo who has grown in confidence. Now, it could be the time to take the next step with Stade Rennais. And with so much young talent already plying their trade at Rennes, it could be a perfect match for both, the player and the club.

21 goals in two seasons across all competitions is no mean feat when starting your career. Kalimuendo scored 12 goals in Ligue 1 in 2021-22 from just 29 shots on-target. Therefore, he was converting almost 50% of all his shots into goals, which is a great showing.

Moreover, he was also involved in 47 shot-creating actions, showing his active presence in the final third. That is also evident in Kalimuendo receiving 9.48 progressive passes per 90 for the 89th percentile in Europe.

However, where he really shines is his passing game. Kalimuendo completed 82.6% of all his passes which placed him in the 99th percentile amongst forwards on the continent.

Kalimuendo overperformed on his xG of 9.21, which is always a strong indicator of him getting into decent goal-scoring areas. His poacher-like qualities will be a strong asset for any club, especially those in need of urgent goals.

Kalimuendo is a typical number 9 who can roam around the attacking sides of the pitch, looking for opportunities to open up. Alongside his club duties, Kalimuendo has also been a regular scorer for the French youth teams. He has 14 goals combined among the French U16s, U17s, and U21s, whom he currently represents.

As good as Kalimuendo has been, there are certain areas which need definite improvement. The French U21 international can be found wanting when it comes to aerial duels. He won only 13.3% of his contested battles in 2021-22.

PSG have one of the wealthiest owners in football, and here are the others who join them on that list

Moreover, he only completed 34.3% of all duels, which speaks of improving his physicality as he grows older. The final area of his playing game is his crossing ability. Kalimuendo completed a measly 11.8% of his 17 attempted crosses.

However, that also speaks of the player’s positioning through the centre. He does not go down the flanks much, meaning he acts mostly as a target-man or a runner in behind the backline.

PSG's considering to bring him back at the mother ship at the end of the season 🕵️‍♂️ pic.twitter.com/XmSR1aMpwX

Kalimuendo was fouled 32 times in Ligue 1, meaning defenders can often have trouble stopping him. That can also be attributed to the fact that Kalimuendo completed 44.3% of his dribbles, a decent figure for a player in just his second senior season.

Rennes know they have a rising star on their hands who will be a wanted man in Europe a few years down the line. Fans had expected a change of approach to developing young talents, because of the recent arrival of Luis Campos, but clearly, Christophe Galtier has different plans.

It was always hard for Kalimuendo to get regular minutes in PSG’s star-studden lineup. Therefore, a move to Rennes always made sense.

Christophe Galtier still remains a fan of Kalimuendo, and he had been scoring in preseason too. Although the offer of regular minutes was always tempting and with a hefty fee offered for the young Frenchman, PSG decided to cash in. Rennes had to move quickly for their target with Leeds United also genuinely interested in bringing the French youth product.