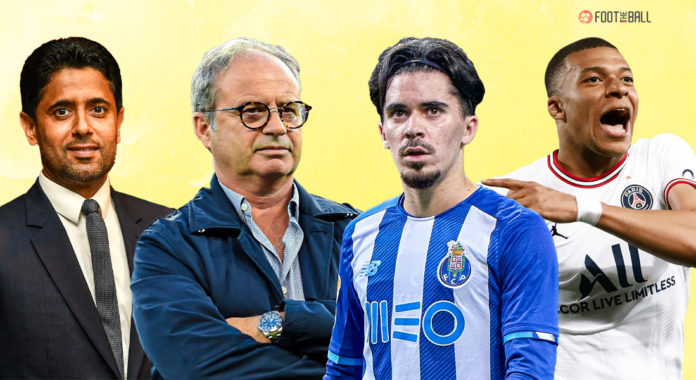 Big changes are afoot at PSG. They have kept ahold of Kylian Mbappe, and Lionel Messi has stressed that 2022-23 will be “different.” Indeed, the wind has started blowing. Sporting director Leonardo has left. So has Mauricio Pochettino.

The underwhelming 2021-22 season, punctuated with a disastrous loss to Real Madrid, has heightened matters. Zinedine Zidane and Jose Mourinho were touted as possible managerial candidates. However, PSG have gone a different route and are set to hire Christoph Galtier.

One of the foremost technicians in Europe, Galtier led Lille to Ligue 1 success in 2020-21. President Nasser Al Khelaifi stated categorically that this was because,

“The dream is one thing, the reality another. Dream Bigger is good but here we have to be realistic, we don’t wants more flashy, bling-bling, it’s the end of glitter.”

Certainly, Galtier is a sensible appointment, and a lot of it is down to the new sporting director. Luis Campos is a master of negotiations and turning clubs into world-beaters. PSG are easily the strongest team he has overseen, and his input is already visible.

Al Khelaifi’s change in mood is evident from what he revealed further. The president came down hard on the squad by saying,

“Our position is clear: players who are not part of the project have to leave this summer, there’s no other way. Some players took advantage of the situation… but now, it’s over.”

Needless to say, the past does not make pretty reading for PSG and Campos. The club had often been blinded by short-term success, which meant going after only star names.

That kind of disregard for balance and team chemistry never worked. Of course, they are the dominant side in France, but Europe is a different beast. Therefore, Khelaifi has understood the importance of following a proper plan instead of chasing glamour.

No doubt Campos has talked sense into the president, who had no choice but to listen. There is a difference between running a club as a business and vice versa. A club can only get to where they need if there’s a proper blueprint followed.

What of the players?

There will be incomings and outgoings at PSG in the transfer window. This is one of the main areas of strength for Campos.

He has been credited with overhauling Monaco and Lille, turning them into champions. In terms of reducing player personnel, Neymar has been one of those linked with a move away. When pressed on this, Al Khelaifi said,

Therefore, it remains a real possibility that the Brazilian superstar leaves soon. The other outgoings could be in the form of Layvin Kurzawa, Juan Bernat, Mauro Icardi, and Gini Wijnaldum.

🇫🇷 “We must be realistic. We don’t want flashy bling bling anymore. It’s the end of the glitter. We want players who love the club, who love to fight, who love to win. We must become humble again."

The Dutch midfielder had a torrid first season, barely making any noticeable impact on the pitch. It is clear that almost all of these players have outgrown their utility to the club, and are the likeliest to be sold.

In terms of buying, PSG have already secured a deal for Porto’s star midfielder Vitinha. Moreover, they had also scouted Renato Sanches, Nordi Mukiele and Hugo Ekitike and Campos made sure to go and get all of them.

Luis Campos on a mission

Luis Campos is not a figure to trifle with names or personalities. He is driven by facts and fit, which is the main reason why Al Khelaifi is bringing this tone. There has been a conception surrounding PSG that they are too focused on glory hunting.

It was a major reason why they were hiring managers on a pretty consistent basis. Carlo Ancelotti, Unai Emery, and Thomas Tuchel have all won European trophies after leaving PSG. Meanwhile, PSG’s European legacy is defined by horrific collapses and weak showings.

That is one of the major areas that Campos will be focusing on. This is why Galtier is his preferred candidate. The pair have worked closely together at Lille, and understand what needs to be done for success. Of course, PSG start every league season as favourites, but it is the Champions League which is Holy Grail.

Better times ahead? Likely. Sensible times ahead? Most certainly. Even a fool cuts his losses after a while. Al Khelaifi is no fool, and with the 2022 FIFA World Cup in Qatar on the horizon, one part of his plan is complete.

🚨 PSG and Luis Campos are ready to let Neymar leave the club this summer. 👋🚪

They will sell the Brazilian forward if they receive a satisfactory offer. 🇧🇷

Mbappe staying is a big win, and it should get even better soon. Galtier can deliver immediate success on the European stage, but will need the right players.

Can Campos keep delivering at the optimal level? Will Neymar leave PSG? How will Mbappe perform? These questions and many more will dictate what happens in the upcoming year. Campos is setting the groundwork, fans will see how the building looks soon.