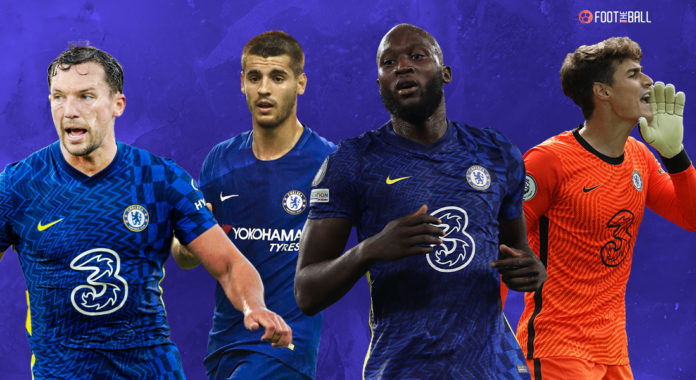 The curse of the number 9 has struck again for Chelsea! The Blues have had terrible luck in recent years in the striker department. Players with the number 9 have massively underperformed and been sold on.

The latest on that list is Romelu Lukaku, whose current situation will be talked about for a while. While he is not being sold (yet), the big Belgian is headed on loan back to Inter.

Lukaku back to Inter after his vacation in London last year 🔵⚫#CFC #Inter pic.twitter.com/YfpVRW8vwk

This comes just a year after he signed with Chelsea for £97.5m. Lukaku never really settled into the Premier League, with his comments about wishing to go back not helping matters either. Therefore, Chelsea and their new owners had to sheepishly reverse the transfer which is admittedly one costly mistake.

However, Lukaku is far from the only striker, or even signing, to not work out at Stamford Bridge. FootTheBall lists down 10 of the worst signings in Chelsea history, in no particular order.

The costliest mistake on the list. Lukaku was supposed to break the mold, the player who would complete his unfinished business.

He had left Chelsea as a youngster before having spells with Everton, Manchester United, and Inter. The Blues were wary of relying on Timo Werner, so Lukaku was a fair option.

However, the 2021-22 told a very different story. Yes, Lukaku had strong showing, but his fitness and fit was an issue.

Then came the bombshell interview with Sky Sports, where his love for Inter made fans cautious. It was a PR disaster, with Thomas Tuchel scrambling to save face. Lukaku’s confidence took a massive hit, and he was no longer a regular starter.

Is Romelu Lukaku to Chelsea the worst transfer in Premier League history?🔵

The goals dried up, before returning for a few games towards the end of the season. Nevertheless, the damage was done, and Lukaku was on his way out. Fans will not miss him too much.

The Champions League winner and Ukrainian legend never really settled at Chelsea. Shevchenko joined in 2006 for £30.8m, but the goals did not flow. He netted on his debut, but was fighting an uphill battle against Didier Drogba. 23 goals in 77 games does not seem too bad, but it fell well below expectations.

Meanwhile, Drogba was getting more and more accolades, meaning Shevchenko’s time was nearing an end. He was loaned back to Milan in 2008, before signing with Dynamo Kyiv in 2009 as a free agent.

A career that has really fallen off a cliff. Drinkwater was a fixture with Leicester City as they rose from the lower leagues to become Premier League champions. However, the move to Chelsea never got going. Drinkwater had a few okay-ish performances, managing 23 appearances.

He has not played for the first team since 2018, and does not look likely to either. Drinkwater’s most talked about moment since then came in 2020. He was sent-off in 2020 while playing for the Chelsea U23s, after a bad challenge on 16-year-old Alfie Devine.

Drinkwater spent time on loan with Burnley, Aston Villa, Kasimpasa, and Reading without much success.

A costly mistake, but not the costliest. Still, that is no solace as Morata was another striker blunder. He was signed for a then-record £60 million, although Antonio Conte publicly said he wanted Lukaku.

However, the manager must have been pleased when Morata scored one and assisted another on his debut.

🗓 ON THIS DAY TWO YEARS AGO:

Morata finished his debut season with 20 goals in 43 games across all competitions. However, the second season was rough.

Morata’s uncanny ability to be found offside reared up, alongside his lack of goals started compounding problems. He was loaned to Atletico Madrid in January 2019, before signing with Los Rojiblancos permanently in July.

Another costly one season mistake. Bakayoko joined in 2017, having just won the Ligue 1 title with Monaco. However, Bakayoko quickly proved to be drowning in the Premier League, and barely offered any protection for the defence.

He was often guilty of giving the ball away and being unnecessarily hard in challenges. Bakayoko never really recovered after getting sent off within 30 minutes in a match against Watford.

Though he did manage to appear 24 times in the league, the club had seen enough. Therefore, he was loaned out to AC Milan in 2018, before spending time with Monaco (loan) and Napoli (loan). Bakayoko was part of the 2021-22 Scudetto winning squad for Milan.

One of the most high-profile names on the list, who actually did well enough. Torres set the British transfer record after signing with Chelsea for £50 million in January 2011. However, the start was not hot at all.

Torres netted only once in that half season, before somewhat recovering. 45 goals in 175 matches is not a bad haul, but it was a far cry from his Liverpool days.

🇪🇸 The last time Chelsea had a Spanish striker in the #UEL…

Moreover, some high profile misses and injury concerns did not help his case either. Torres’ best moment came in the 2012 UEFA Champions League semi final, with Chelsea eventually winning the competition. He was loaned to AC Milan in 2014, before signing permanently with Atletico Madrid.

The Belgian striker, much like his international teammate, was not successful. Batshuayi was signed for £33 million in 2016 from Marseille.

He scored the title-winning goal against West Brom in his debut season, but that was as good as it got. Batshuayi was not a consistent starter, making on 20 appearances in the league which produced five goals.

However, two goals in the first half of 2017-18 saw him loaned out to Borussia Dortmund. That was followed by a season-long loan to Valencia in 2018-19.

Batshuayi returned to Chelsea in 2019 and the following season produced six goals in 24 games across all competitions. Since then, he has spent time on loan with Crystal Palace and Besiktas.

The left back had a decent debut season after being signed from Augsburg. He made 23 appearances in all competitions, but the arrival of Antonio Conte started his downfall.

The manager left him out of his plans, with Baba Rahman joining Schalke on loan in 2016. That started a cycle of continuous loan spells with stops at Reims, Mallorca, PAOK, and Reading. Moreover, he is still a Chelsea player, just a part of their huge loan system.

What does the costliest goalkeeper do on the bench? You will have to ask Kepa, who is firmly the secondary at Chelsea. £72 million paid to Athletic Bilbao was considered a risky investment, and it proved disastrous eventually. Kepa had a few strong performances in 2018-19, including that famous bust-up on field with Maurizio Sarri.

Kepa kept getting easily in 2019-20. Kepa had the worst save percentage, and conceding goals almost too easily.

Therefore, it was no surprise when he was replaced by Edouard Mendy as the first choice. Nowadays, Kepa plays occasionally in the domestic cup competitions.

In the early days of Roman Abramovich as owner, Chelsea were investing heavily on players. Mutu came in from Parma for over £15 million in 2003, and made a very hot start. Four goals in his first three games raised hopes of a lethal striker.

However, he finished the season with just 10 goals across all competitions. Mutu clashed with Jose Mourinho often, but the major blow came the following season.

Cocaine usage saw Mutu get banned for seven months in 2004. Chelsea and the Romanian got into a heated legal battle over breach of contract. In 2015, the Court of Arbitration for Sport (CAS) ruled that Mutu had to pay £15 million to Chelsea. A transfer that got ugly for all involved.