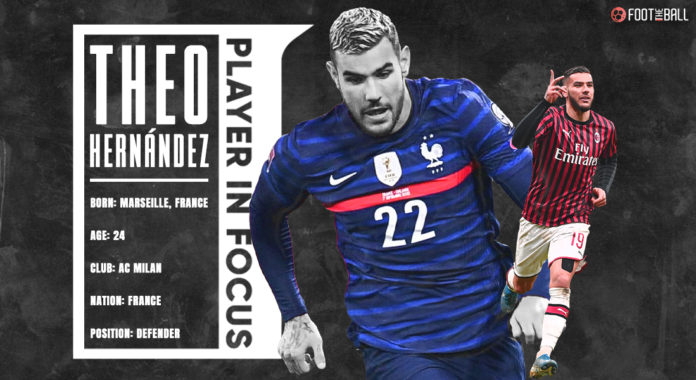 AC Milan are on the cusp of being Serie A champions again. A lot has changed since the last time they were on top in 2011. Stefano Pioli has worked wonders since his appointment in 2019. The squad is young, balanced, and hungry for more. One of the shining lights over the course of the season has been Theo Hernandez.

The electrifying left wing back has been a key cog in the system. Hernandez has certainly had his critics throughout his young career. The French international was once sent out on loan to Alaves.

The current glitz of Milan is a far cry from those nights, more so because Alaves just got relegated. So, how did Hernandez end up at Milan, where he has developed into one of the world’s best at his position?

Theo Hernandez has been an offensive behemoth ever since joining Milan. It was sporting director Paolo Maldini who had the critical hand in negotiations. Hernadez was at Real Sociedad when he had a meeting with Maldini in Ibiza. The former Milan defender pushed for his signing and it was eventually completed in 2019. Since then, Hernandez has racked up 18 goals and 13 assists in the league over three seasons.

🔴⚫ Only Rafael Leao (17) and Olivier Giroud (12) have played a direct hand in more Serie A goals for AC Milan than Theo Hernandez (11) this season.

🥵 None more important than last night's stunner vs Atalanta pic.twitter.com/KJRcRKIfnE

Hernandez’s rapid change of pace and ability to carry the ball sets him apart. He averaged 6.56 progressive carries per 90 with 1.63 dribbles completed per 90. Therefore, it is clear that Milan want to funnel their attacks quickly through him.

Pioli trusts Hernandez to pick up the ball and drive at the opposition. The team depends on big switches of play. Hernandez is more attack-minded than the right wingback (usually Davide Calabria).

A goal to remember. 🤯🤯🤯 pic.twitter.com/N0LDCfggHx

That is why the Rossoneri consider him one of the first names on the team sheet. Truth be told, they do not even have a worthy replacement. Theo Hernandez has really made Milan his home, and 2021-22 was just another step up in his rapidly ascending career.

Live wire on the left

Theo Hernandez’s offensive evolution has aided Milan’s ascent up the table. He can score mazy goals, long-range belters, and deliver deadly crosses. However, what has also been incredible to watch is how his connection with Rafael Leao has blossomed. The pair are one of the most dangerous combinations in Europe. The most fascinating part about all of this is that nobody really saw this development coming.

One of the best strikers among the defenders. 🔴⚫️ pic.twitter.com/cEAsHWrQaT

Hernandez was a way down the pecking order at both Atletico and Real Madrid. A solid season with Sociedad in 2018-19 was the key to turning things around. Hernandez has slotted in seamlessly in the four-man backline.

Hernandez keeps a pass completion rate of around 80%. Pioli wants Hernandez to focus on the attacking aspects as the defence has a double pivot screening them. Furthermore, Fikayo Tomori is extremely versatile across the line and can cover for Hernandez. That is why there is not much workload in tracking back for Hernandez if an attack breaks down.

A regular for club and country

Theo Hernandez’s explosion at the top-level has seen him break into Les Bleus squad. He pairs up with his brother, Lucas, in the backline. Hernandez had to wait for a long-time on order for this to become a reality. Milan are without a really true superstar, save for the injured Zlatan Ibrahimovic.

What an incredible signing, Theo Hernández. Paolo Maldini wanted him at all costs three years ago, after a meeting with Theo himself in Ibiza… and invested €20m to sign him for AC Milan. 🔴🇫🇷 #ACMilan

Theo recently extended his contract until June 2026, he only wants to stay.

That is why Hernandez has settled in even more nicely. He has had not the spotlight shone so much on him like his previous clubs. There is not much competition, which was not the case at Real Madrid.

Alongside Leao, Tomori, Franck Kessie, and others, Hernandez has been a superb signing. Maldini deserves the major share of credit for bringing Hernandez and furbishing a team around him which goes all guns blazing.