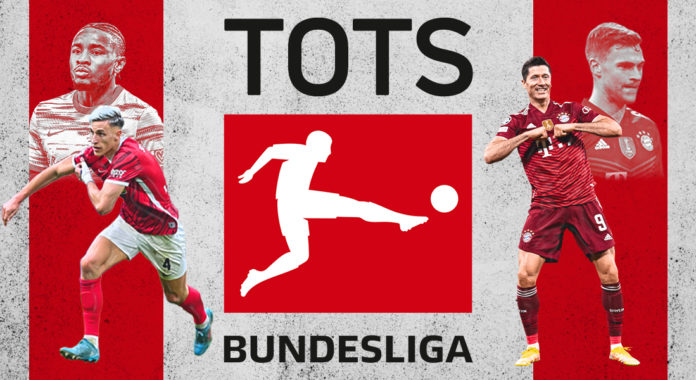 The Bundesliga 2021-22 season is officially over. Bayern Munich are champions, as is routine. Bayer Leverkusen are back in the Champions League. Freiburg are into the Europa League. There have been several incredible performances from teams and players from all the 18 clubs.

There it is, your final #Bundesliga table of the season.

And yes, we have a tear in our eyes too. 😢 pic.twitter.com/TIQfPrU18J

Therefore, it is that time of the year again: choosing the ‘Team of the Season.’ As always, it was incredibly choosing just 11 players. Some honourable mentions got really close but failed to make the final cut. So, with that sorted out, FootTheBall presents the Bundesliga Team of the Season for 2021-22.

The veteran goalkeeper for Bochum recorded seven clean sheets from 31 appearances. However, its his high quality saving and ability with feet that really set him apart. Riemann is extremely active inside the penalty box. He stopped 10.5% of crosses (89 percentile) and 55.58 touches (99 percentile) per 90.

Manuel Riemann is a cool customer 🥶 between the sticks for @VfLBochum1848EN. ⛔🥅 #Bundesliga pic.twitter.com/m06HzQtxcU

Moreover, Riemann has a save % of 71.8 alongside two defensive actions outside the penalty area per 90. That is not all, he averaged 18.4 yards in defensive actions which puts him in 98 percentile. A brilliant season encompassed by Bochum finishing a solid 13th after their return to the Bundesliga.

The Bundesliga has become a haven for American teenagers and Scally is one of the most promising of the lot. Borussia Monchengladbach trusted the 19-year-old enough to have him play 30 matches, including 20 starts. Scally applies 18.03 pressures per 90, which is good for the 93 percentile across Europe.

Joe Scally for Borussia Mönchengladbach in the Bundesliga this season:

Impressive start to his career in Germany. 🇺🇸 pic.twitter.com/XAMiJ94urY

Moreover, he has an extremely calm head on his shoulders which allows him to sniff out the danger. Scally, like all modern fullbacks, is attack-minded with 80% passing accuracy and being involved in 33 shot-creating actions. Therefore, there is a lot to like about Scally as he matures into a full-blown star.

One of the most promising defenders in world football who recently signed for Borussia Dortmund. Schlotterbeck was a force of nature in Freiburg’s defence on both sides of the pitch. Apart from scoring four goals and assisting one, all his stats are through the roof.

Borussia Dortmund win the race to sign one of the most highly-regarded young centre backs in the Big 5 leagues #BVB pic.twitter.com/8FXRQ7nfum

Schlotterbeck ranks in the high 90s percentile for shots (1.18), shot-creating actions (1.61), dribbles completed (0.70), tackles (2.61), and aerials won (4.07). Therefore, it is no surprise as to why there has been so much hype surrounding Schlotterbeck. He can make decisive impact in any portion of the match which is crucial. Still only22, he will only get better.

Speaking of young centre-backs, Gvardiol is really coming into his own as a true phenom. The Croatian international has been a constant in Leipzig’s defence as they clinched Champions League football. Like Schlotterbeck, Gvardiol is extremely important for both attack and defence.

Joško Gvardiol in the Bundesliga this season:

19 years of age. Another great transfer by Leipzig. 🐂🇭🇷 pic.twitter.com/J2y4xZWpxV

He averages 5.31 progressive passes, 5.45 progressive carries, and 0.89 dribbles completed per 90. Gvardiol has a great sense of timing challenges with 3.29 interceptions per 90. Moreover, Leipzig have perfected the three-man defence which comes in favour of Gvardiol at the best moments.

One goal and eight assists in the Bundesliga were worth their weight in gold as Stuttgart avoided relegation on the final day. Sosa created 61 chances on 78% passing accuracy and winning 58% of his duels. Moreover, he was also an avid player in keeping the ball, averaging a dribble success ratio of 70%.

9 – Since beginning of 2020-21, Stuttgart’s Sasa Kalaidzic has scored nine goals after assists from Borna Sosa, only goals from Bayern’s Robert Lewandowski via Thomas Müller assists have produced more Bundesliga goals in this time (14). Tandem. #FCBVFB pic.twitter.com/MJ5b7DXcHK

Sosa’s trickery and clever play helped him earn 26 fouls, and Stuttgart rely on him down the left. Needless to say, he will be relied upon heavily for the 2022-23 season too in order to move up the table.

There can only be one option in this position. Kimmich is one of the best players in world football in the variety of positions he excels at. Bayern Munich had been relentless over the years with Kimmich running the engine room. He is an expert in advancing the ball with 9.93 progressive passes per 90.

Moreover, he attempts 92.36 passes and is involved in 4.96 shot-creating actions, both of which put Kimmich in the 99 percentile. Despite his stature, Kimmich’s versatility and perfection in his actions make Bayern a complete unit. Oh, and he also had 12 goal contributions (three goals and nine assists). The player could do it all.

The 18-year-old is already playing like a veteran on the biggest stages. Bellingham has been one of the key blocks for Borussia Dortmund since his signing in 2020. He plays in the double pivot but can be found in and around the penalty box often. 1.87 dribbles completed, 5.70 progressive passes received with 5.37 progressive carries.

Bellingham’s forward movements have been a major part of Dortmund scoring goals in most matches. However, he is also no slouch on the defensive end as Bellingham puts in hard challenges and blocks passes very effectively.

Another exceptional youngster who has the world at his feet. Wirtz is Germany’s leading light as they undergo a cultural revolution under Hansi Flick. Wirtz had seven goals and 10 assists in the Bundesliga, with 5.09 shot-creating actions per 90. He is still 19, and has taken over the mantle from Kai Havertz.

The first ever 17-year-old to score five Bundesliga goals ⚽

Wirtz is also an energy beacon who can press all over the pitch and is not averse to doing the dirty work. That is why his professionalism and eye for goal is praised by all in Europe. Wirtz has the skillset to succeed and will certainly be one of the headliners of Leverkusen’s return to the Champions League.

The breakout star of Europe without any doubt had a season nobody saw coming. In an average RB Leipzig side, Nkunku broke all barriers with 40+ goal contributions across all competitions. 20 goals and 13 assists in the league despite not being the furthest player up the field is simply staggering.

Nkunku has developed into an excellent finisher with a bag full of tricks. 10.56 progressive passes received per 90 with a 48.8% shots-on target accuracy. Moreover, he was also involved in 4.43 shot-creating actions per 90, exemplifying how high up the pitch he operates. Leipzig funnel their attacks through him and it works out most of the time.

Was there ever any doubt? The record goal scorer who picked up yet another Golden Boot with 35 goals (and three assists too). The Polish superstar may not be at Bayern for long, after a publicized revelation of wanting to leave. However, there was no stopping Lewandowski in 2021-22. Placing almost half (49%) of all his shots on target and being a part of 104 shot-creating actions.

334 – Robert Lewandowski has scored 334 competitive goals for FC Bayern, more than any other player from Europe's big five 5 leagues since his arrival in 2014. He has had a hand in exactly 400 goals in 373 competitive games for the Bavarians (343 goals, 57 assists). Farewell? pic.twitter.com/F8wXPfKIXf

Lewandowski is a finisher of the highest order, being able to score from almost any position. He thrives inside the penalty box and can start attacks too from all across the front line. The Bundesliga will certainly not be the same without him.

Another burgeoning star in the making who had a wonderful season with Leverkusen. Diaby has been around for a while, despite only being 22-years-old. This was his third full season in with the club and quite evidently, the best of his career so far. 13 goals, 12 assists and a whole lot of pace.

UCL ball secured. A constant this season amidst the injuries! 🌟 pic.twitter.com/S4Lu6DEMrP

Diaby has the ability to blow by players or twist them up with an array of skills. Being quite capable of playing with either foot, Diaby is dangerous when he is marauding down the flanks. Expect to see a lot more of him in the coming years.