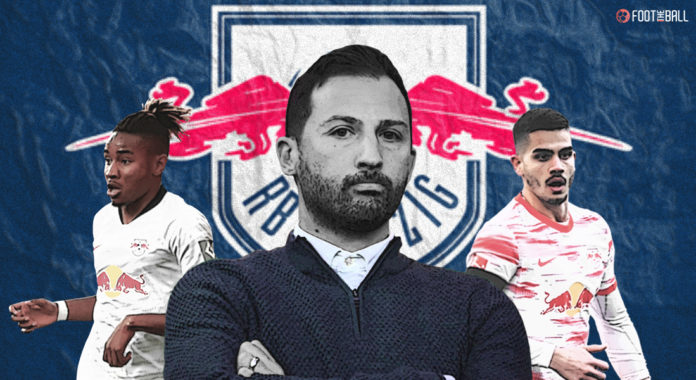 December 8, 2021. Matches played 14, won 5, lost 6, and drawn 3, .18 points, 11th place. April 3, 2022. matches played 27, Won 14, lost 8, drawn 6, 48 points, fourth place, a place in the Europa League quarter-finals, a place in the DFB Pokal semi-final. RasenBallsport Leipzig, or RB Leipzig as they are more commonly known, have turned around their season in less than three months. The German side, which had finished second in the previous season, looked like a shadow of themselves. So, what changed? Nothing much apart from the man on the sidelines, Domenico Tedesco.

Under the 36-year-old, The Red Bulls have rediscovered their form and are now chasing the dream of a treble. They are also the team with the most points in Bundesliga in 2022. So, what changed under Tedesco?

Under Tedesco, Leipzig have played 14 games in Bundesliga. Out of this, they have won nine, drawn three, and lost two matches, taking 36 points, the second-best points haul in the league. At the same time, they have scored 6.89 goals more than the xG (expected goals) in those 14 matches, the best in the league.

They have massively improved in the attacking phase and are now the second-best team in the league for Field Tilt. In addition, their goal conversion rate is now even better than leaders Bayern Munich.

RB Leipzig have also been the best defence in Bundesliga since Tedesco’s appointment conceding just 13 goals.

Tedesco’s appointment also came when the club had been demoted to Europa League after finishing third in their Champions League.

In case you missed it: RB Leipzig’s struggles under Jesse Marsch

The manager oversaw the 5-3 win over Real Sociedad, including an impressive 3-1 away win.

In the next round, they were drawn against Spartak Moskow but were declared winners of the tie by UEFA after Russia invaded Ukraine.

Their next opponent were Italian outfit Atalanta. After securing a 1–1 draw at home, the Germans produced a scintillating display to beat Gli Orobici 0-2 courtesy of a Christopher Nkunku brace.

They now face Scottish side Rangers in the semi-finals.

Check this out: What is Buidlup Disruption Percentage?

The demolition of Dortmund

An away team going to a stadium with more than 81,000 fans rooting for the home who got Erling Haaland in their starting lineup, what could go wrong? Well, not much as Leipzig showed with a brilliant 4-1 win over second-placed Borussia Dortmund.

It was the Konrad Laimar show as the Austrian scored two goals and provided one assist.

And this match was also an example of Leipzig’s brilliance in the attack. Leipzig’s overperformance in the xG department is the best in the league, which was evident in this match.

According to Understat, Leipzig’s xG in the match was only 1.23, marginally better than Dortmund’s 0.97. However, they still managed to score 4. This newfound confidence has helped them become such a dangerous side in just a few months.

Flexibility is the key

Defender Lukas Klostermann while speaking to The Athletic, insisted that Domenico Tedesco didn’t try to entirely change the playing style of the team when he was appointed. He instead tried to tweak it in places where he thought the team could improve, and the results have been astounding.

One of the first things that the German-Italian coach did after his appointment was bolstering the backline. Josko Gvardiol, Willi Orban, and Mohamed Simakan have been brilliant at keeping the opposition’s attack at bay. In addition, the three-, man defence formation gives the two wing-backs incentive to go on the attack.

Angelino, who was struggling under previous coach Jesse March has found his mojo again, while Benjamin Henrichs has been ever-present on the right flank.

Speaking to Bundesliga.com, Tedesco stressed on the skill to adapt. It was not only for players but also for himself too. “My idea of football, in general, is that you have to adapt. You have to adapt to the kind of players you have and what kind of strengths you have inside the squad; this is the main thing in our work”, he said.

🗣️ @RBLeipzig_EN boss Domenico #Tedesco is aware of how far his side have come but continues to take it one game at a time. 👏 pic.twitter.com/McgYqsCyOS

In the same interview, he lamented that he was looking for balance. A balance between pressing, possession and counter-attack based football. “We wanted to play a little bit more in possession [and] we tried to press a little bit differently. When I first came here, I realised that players were very hungry to press very high which is as I like it, but sometimes it’s also better to stay calm in some situations,” he said.

After their empathic win over Borussia Dortmund, Leipzig’s grasp on the fourth position has gotten stronger. And a few more wins could even propel them past Bayer Leverkusen in third place. Domenico Tedesco has also managed to get players such as Andre Silva, Angelino and several others back in form.

Meanwhile, Christopher Nkunku has become their most potent attacker. He is the third-highest goalscorer (16) and second-highest assist maker (11). He also has an expected Offensive Value Added (xOVA) of 9.03, the fourth-best in the league and the best of any non-Bayern player.

And the club are also backing the manager by planning for the future as evident by their signing of goalkeeping prodigy Marteen Vandevoordt.

Other players have stepped up, too, with the team now running like a well-oiled machine. They still have work to do; however, for now, The Red Bulls are charging and decimating everyone in the way, and Domenico Tedesco will hope that they continue to do so.