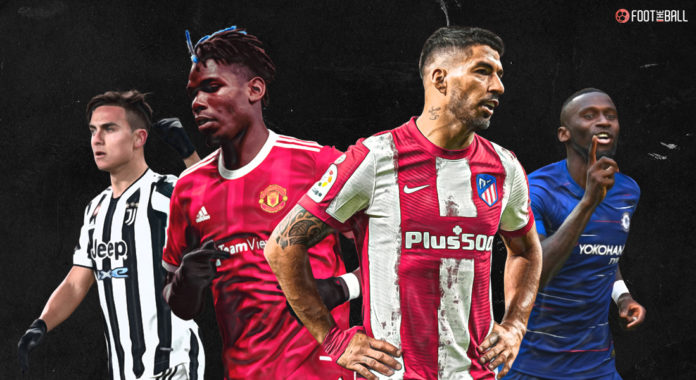 What do Paulo Dybala, Paul Pogba, Kylian Mbappe, Gareth Bale, Luis Suarez all have in common? They entered 2022 unsure of where they will be playing football in the next season. Not only them but there has also been a marked rise in the number of players choosing to run down their contracts.

Juventus CEO Arrivabene on Paul Pogba: “Pogba’s Manchester United player, I respect him and Man Utd. Pogba's agency also have Kean, Pellegrini… Paul was not at all the main subject at today's meeting”. 🇫🇷 #MUFC

Pogba will take his time to decide his future. Nothing agreed yet.

The ‘soon-to-be’ free agents leave the security and safety of a haven they have known well for…what exactly? The mindset to test your luck as a free agent is a popular concept in the NBA. Football has been grappling with this whole issue for some time now. Well, there are quite a few reasons why players feel comfortable not signing an extension to their ongoing deal. These can range from being monetary to pastures anew.

The best free agents of the summer are some of the biggest names in football. Check them all out here!

However, not all of them are as straightforward as that. The upcoming summer of 2022 is set to witness one of the biggest free-agent markets with star names across the board. Where will they end up? Who knows. There is much to wonder about and figure out throughout the next few months. The most important of them is why are players going down this route so frequently.

Show me the money!

Tom Cruise’s immortal line is certainly one of the primary reasons players do not want to stay at their current clubs. Antonio Rudiger’s move to Real Madrid was a media frenzy, given what was allegedly going on behind the scenes.

The star defender was asked to become one of the highest-paid players in the world. Chelsea were not budging, and then the weight of sanctions made the whole discussion redundant.

Antonio Rüdiger has agreed to join Real Madrid on a FREE transfer and will be paid around €400,000 per week. 💰 pic.twitter.com/H4MYh2Xh2P

However, it was highly unlikely the Blues would acquiesce to the German’s demands even before that. A similar example can be seen at Napoli and their captain Lorenzo Insigne. The Italian attacker had a fantastic Euro 2020 campaign and had just entered his 30s.

Instead of continuing his career at the highest levels of Europe, Insigne has joined MLS side Toronto FC. Moreover, the players also command a huge sign-on fee apart from the increased wages.

And understandably, it was an emotional day. https://t.co/0vdqcxnvYH

Therefore, several clubs are understandably buckling under the pressure of keeping their star players. A similar situation is also part of the reason why Dybala is leaving Juventus after almost a decade.

La Joya is 29-years-old and will find a place amongst Europe’s finest clubs. However, it is still a timid way in how his career with Juventus is ending and yet another example of how players are banking on the pull of the market.

The grass is greener…

The adage is true in all sorts of sports. There are several reasons why players get tired or frustrated with their current surroundings. Paul Pogba’s erstwhile agent Mino Raiola was famously at loggerheads with Manchester United. Gareth Bale’s final few years with Real Madrid have been just him sitting on the bench.

A return to English football looks a possibility for the Welshman 🏴󠁧󠁢󠁷󠁬󠁳󠁿 pic.twitter.com/C61RaBb3DD

Much the same case with Isco. A fresh start is necessary to get your bearings. Therefore, players are even willing to take a pay cut at their new clubs. The harmony between players and their surroundings needs a lot of things to go right.

That cannot always be the case in today’s highly pressurized environment. Even players who have been at their clubs can demand a change in scenery due to this.

Sometimes, a player wants to experience the rigors of a new league or team. Robert Lewandowksi asking for a transfer away from Bayern Munich certainly falls under this category. Over the past many years, one of the premier strikers in world football is set for a new club soon. Edinson Cavani left PSG after becoming their all-time top scorer in 2020.

Read also: The potential stars who could replace Robert Lewandowski at Bayern Munich

Kylian Mbappe is all set to join Real Madrid. However, there is also various example going the other way. Fernandinho is widely rumored to head back to Brazil after the 2021-22 season.

Suarez is also set to head back to Uruguay, given his advanced age and unlikely status of wanting to become a secondary option. This part of the reasoning can also factor in the money condition, but that is just a part of the fabric.

One of the most important reasons why players are growing confident in becoming free agents. They are extremely sure of their abilities and powers on the pitch. That knowledge is key in taking these types of tough decisions. These can be seen in a variety of examples from the current age.

Dybala, Pogba, Jesse Lingard, Alexandre Lacazette, and more are all banking on recapturing their old flame for new teams. Therefore, it will not be a surprise if they enjoy some strong rebound seasons shortly.

Thus, the reasons for players wanting to become free agents are complex and varied. They rarely follow a linear path, and often end up mixing.