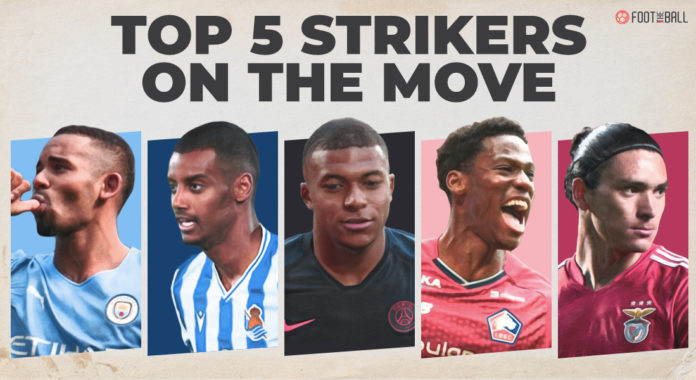 The summertime madness started early in 2022. Erling Haaland’s sensational transfer to Manchester City was expected for some time. It was immediately followed by Borussia Dortmund signing Karim Adeyemi from RB Salzburg. The attacking merry-go-round was weeks in the making. Haaland’s low release clause meant many clubs were in the hunt.

Dortmund needed a good replacement and got one of the most promising German strikers. However, all of this is just the tip of the iceberg. There are many more deals awaiting the opening of the transfer window. FootTheBall highlights the five most highly anticipated moves in the coming weeks.

No doubt the biggest story of 2022. Kylian Mbappe’s flirty nature with PSG alongside being courted by Real Madrid well-known. It is an intense showdown between the two clubs who have had bad blood due to Mbappe. PSG are breaking the bank to sign him to an extension.

🚨 Kylian Mbappé is seriously considering renewing his contract at PSG because of the image rights issue. Real Madrid want 50% of his image rights, while PSG are letting him keep 100% of them.

🚨🚨| Kylian Mbappé is leaving PSG to join Real Madrid as a free agent. The only remaining question is when it will be announced. @BILD #rmalive pic.twitter.com/ClBlcLrgOA

The move will have major impact no matter if it happens or not. Kylian Mbappe staying on at PSG will definitely make them yearn the Champions League more. If he decides to leave, Madrid will be virtually unstoppable on the Spanish and European scene. Either way, Mbappe benefits massively given his young age and unlimited potential.

The Lille superstar is primed for a big move to an European giant. Lille are experts in developing young players before selling them for huge profits. That is why it is no surprise why there’s so much excitement surrounding David.

He has been Lille’s premier goal threat over the past two seasons, and recently helped Canada qualify for the FIFA World Cup in Qatar.

Lille are already prepared to sell some players this summer. Jonathan David’s rise from Jan 2018 has been excellent and top clubs have his name in the list. 🔴⭐️ #Lille

There are several clubs tracking David, including Arsenal and AC Milan. Though David’s form has hit a rough patch as of late, it is difficult to see him staying on at Lille after the current season.

Read also: The top facts about Jonathan David you need to know

A core of Rafael Leao, Jonathan David, and Brahim Diaz will be a dream. Milan fans must be salivating over the prospect of getting the Canadian. Stefano Pioli has already rejuvenated their luck and adding David will be a masterstroke.

Milan have shown they can regularly challenge for the Serie A title but their European performances need lifting. That is where David can be the gamechanger too with his natural skills and goal scoring prowess.

The South American with most goal contributions in Europe, Darwin Nunez has been a gamechanger. The Uruguayan striker who plays for Benfica is a real force to be reckoned with due to his superb finishing and rapid pace. Nunez has won the Golden Boot in Portugal at a canter and stunned Liverpool in the pair’s second-leg meeting.

Moreover, Nunez has shown he has the potential to keep on proving, and given his idol is Edinson Cavani, clubs will be happy to splash the cash. West Ham United tried a late move for Nunez in January but failed.

No doubt, they will be back but his time, there will be stiff competition. Manchester United, Arsenal, AC Milan, Chelsea, and Newcastle United are all in the running. It will be fascinating watch.

🚨🇺🇾 Darwin Nunez is a player #MUFC have discussed. The club consider him Man United level and is a player they see is perfect for the present and future but he is not the only one they are looking at. @FabrizioRomano, @UnitedStandMUFC ✅ pic.twitter.com/9skZ5rmcBR

To learn from Cristiano Ronaldo is a dream come true for any striker. Granted, there are rumours that the Portuguese great might leave but United simply cannot risk it. Nunez will be joining a new manager who will be hungry for early success too. The upcoming transfer window will mean sweeping changes at the club and Nunez will profit. There will be a goal scoring burden on him, of course, but he has shown he can take it head on.

A late entry into the list after Haaland’s move to Manchester City. There have been rumblings of a move all season long, given Pep Guardiola’s sporadic usage of Jesus.

However, the Brazilian striker has been in sparkling form of late with goals aplenty. Nevertheless, his agent has revealed that talks have been held with Arsenal, with the Gunners being a preferred spot for a move.

Exclusive. Gabriel Jesus agent Marcelo Pettinati tells me: “We had talks with Arsenal about Gabriel Jesus, we like the project – it’s a possibility we’re discussing”. 🚨🇧🇷 #AFC

It will be an intriguing match as Jesus is still young enough to hit his peak years in London. Having spent a lot of time in the Premier League, he will know all about performing on the biggest stages. A return to the Champions League beckons for the Gunners, which will only strengthen their hand in negotiations.

Mikel Arteta is already very familiar with Gabriel Jesus. He will not come cheap, but Stan Kroenke has the funds. Last season, the owner showed he had the willingness to spend too.

Jesus will fit right in with the young core Arsenal are developing with the likes of Bukayo Saka, Emile Smith Rowe, Martin Odegaard, and others. Moreover, the Gunners need strikers and getting someone with such vast experience alongside winning silverware is a boon. They can be a real force to be reckoned with in England and Europe.

It is now time for Isak to make the long awaited move to a heavyweight club. The Swedish striker has been banging in goals for fun. Isak is one of the key reasons why Real Sociedad continue to punch above their weight every year. There have been links to various clubs with Isak seemingly on his way out.

Sociedad will not be able to resist a big money move and Isak could benefit from the experiences of a top European club. Manchester United, Arsenal, Newcastle United are all in the mix and there could yet be more. Isak has huge potential of development and can be a real asset to a club aiming to challenge for silverware.

Chelsea will be on the lookout for a new striker. Romelu Lukaku’s struggles have been well-documented. Timo Werner blows hot and cold. Kai Havertz is not a true number nine. Isak will be joining a club steeped in history with one of the best managers in Thomas Tuchel.

Though he will have to be patient, there is no doubt that Isak will start firing if guided properly. Chelsea have been guilty of letting young talents leave early in the past and could do with a reversal in fortunes. Moreover, the presence of new ownership will certainly make the move financially feasible too.