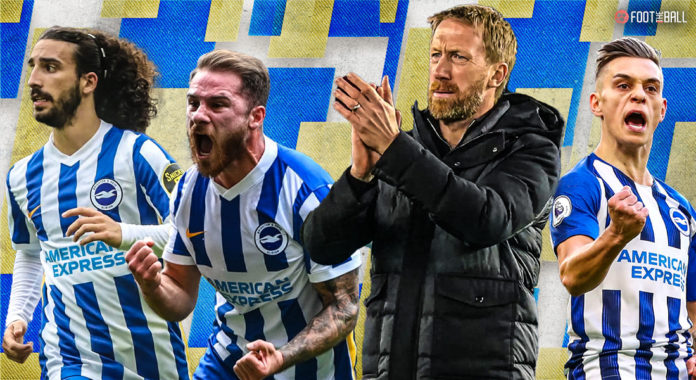 Brighton and Hove Albion, after their highest-ever PL finish last season, have made some start to their 2021-22 campaign. Beating Man Utd 1-2 to get their first win at Old Trafford, Graham Potter once again has shown why he is one of the smartest managers in the Premier League. The fluid way his Brighton side adapts its tactics game by game, and even in-game from time to time, is truly special.

Graham Potter is an underrated gem who if sticks around at Brighton could finally make sure the club from the south coast of England could book its deserved spot in Europe very soon.

Graham enjoyed that one! 🎉 pic.twitter.com/y31Xe5AsCf

Brighton and Hove Albion fans would be hoping the British manager sticks around to make sure that the Amex will host European nights. Potter’s Brighton has evolved further progressing nicely. They are outside favourites to provide a scare to the established top-6 this season. With some smart recruitment, they can be this season’s West Ham.

What is so amazing about Graham Potter and his tactics is that no matter the changes to the team sheet or the match-by-match positional changes his players have to adapt to, his Brighton team’s performances do not waiver. The team always plays aesthetically pleasing football with excellent defensive structures. They always create big chances no matter who the opponent is, and the stutter in Brighton’s squad performances has been fixed by Graham Potter with a few tweaks to his tactical setup. Those little tactical tweaks yielded wins against two of the fiercest London rivals last season. Arteta’s Arsenal and Conte’s Tottenham Hotspurs felt Potter’s side playing at their full flow and the PL is again on notice after their deserved win against Man Utd

Their 4-0 win at the Amex against Manchester United last season was evidence of the quality the Seagulls are capable of producing on the pitch. It was also the perfect example of the lack of quality in the Red Devil’s squad right now. However, it was still put down to the dysfunction at United. Now, with Erik ten Hag at the helm, credit is due.

Brighton finished with their best points tally in the Premier League last season and are destined to improve upon it despite losing important players like Yves Bissouma and Marc Cucurella.

As the season begins, it’ll be interesting to see where Brighton end up in the league at the end of the season.

Let’s take a look at how Graham Potter has continued to evolve and adapt his Brighton sides tactics and whether they are ready to fight for European spots this season or not.

Brighton drastically underperformed their Xg and in turn their expected points during Potter’s first season, they ended the season in 16th position but expected stats showed that they actually should have come 5th. Basically last season Brighton deserved to end in the European spots but were nowhere close.

But those performances have essentially acted as a launchpad for Brighton ever since. At the start of the next season, they seemingly picked up from where they had left off. Their start to this season was explosive to say the least.

Their attack was slightly overperforming at the start of the season but their defence was one of the best in the league. That became the base of the upsets they caused last season.

Last season, Brighton were one of the best defensive teams in the league which made them one of the toughest teams to face at home. Bigger teams went to Brighton and always looked at it as a potential banana skin. Underperforming elites had their pride stripped off by Brighton’s hungry team and manager.

They did have a bit of stutter in the league in the winter. Brighton looked depleted from the start of November to the end of February. The criticism levelled at Brighton, Graham Potter and the tactics was that the team was very easy to cut through and struggled to deal with fast transitions.

The amazing Yves Bissouma is named the TotalEnergies Man of the Match! 🔥

It is also important to note that Yves Bissouma, probably the best destroyer in the league, had gone to the AFCON and was dealing with fatigue because of the continental competition.

However, that absence allowed Potter to fine-tune his side to account for his absence. That process will bear fruit now that Bissouma has been sold to Spurs.

The way Brighton recovered after the Stutter could be attributed to their new signings and  little tactical tweaks from Graham Potter.

Marc Cucurella and Enock Mwepu, finally started hitting top form around March. Mwepu is set to star this season while Cucurella’s performances in just those six months had Chelsea splashing the cash on him.

A debut season like no other. 🔥 Our Men's Player of the Season is @Cucurella3! 🌟

Marc Cucurella became one of the best fullbacks/wing backs in the league. He has a goal and an assist in the league, but his performances on the left flank for the Seagulls were monstrous.

2⃣2⃣ points and counting away from home this season – our record @PremierLeague total. 📈@AlbionAnalytics takes a look at the numbers behind Saturday's win! 🤓🧠

Moises Caicedo is another player who has contributed to Brighton’s recovery. The Ecuadorian midfielder took time to bed into this Brighton side but has since exploded into life. A box-to-box raider with excellent defensive contribution, he is one of the main reasons Brighton have become an extremely secure side in transition.

The man of the moment! 💬🇪🇨 pic.twitter.com/yAidCRWzbh

Manchester United were reportedly interested in him but Brighton moved quickly. Now, while Man Utd play a threadbare midfield while dragging on the Frenkie de Jong transfer saga, Caicedo has just played a huge part in bossing United’s midfield in an iconic win.

The other players who have been performing exceptionally for Brighton last were Leandro Trossard, Alexis Mac Allister, Adam Webster and Danny Welbeck. Trossard, Webster and Mac Allister were the best players in their position in the league outside of the traditional top 6 sides. Webster and Trossard especially have been magnificent this season. The tactical tweaks from Graham Potter really allowed each player to do what they do best while their teammates complemented their games beautifully. The result was a machine that was more than the sum of its parts. The results are clear for everyone to see.

Brighton and Graham Potter will surely look to secure a spot for European competitions. If players like Trossard, Webster, Mwepu and Caicedo continue their development under Potter and pick up from where they will end this season, they will be challenging the likes of Ten Hag’s United , Moyes’ Hammers and even Tuchel’s Chelsea for a European spot.

A special night celebrating a special season. 💙 End it by enjoying our 21/22 montage! 🎥

Seemingly all they are missing is a 15-goal-a-season striker that can score goals even if their form takes a dip. Neal Maupay is a good Premier League-level striker but he needs competition and support from within the Seagulls rank. If Graham Potter’s Brighton are able to get in a proven goalscorer at the top level Europe will be in their sights.

What adds to Brighton’s chances is the capability of Graham Potter to tweak his tactics and ability to slowly and correctly embed new players into his system. The sky is the limit for The Seagulls, and the most important part of their rise is not a player, but the man in the dugout.