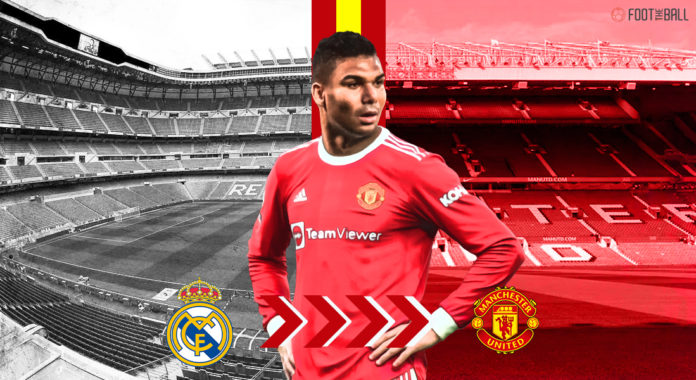 The Manchester United transfer tombola has spun once again and this time they’ve ended up with a world-class defensive midfielder in the form of Casemiro. That’s good, isn’t it? Signing a world-class defensive midfielder seems like a really good idea, because Manchester United’s current options in the centre of midfield are standing out as malfunctioning components. Yet this is Manchester United in 2022, so nothing is ever simple. It’s hard to put a finger on it but this feels like a vaguely undignified transfer. There’s an inherent desperation to it.

The 30-year-old certainly has a glistening CV that could rival almost any elite player across the continent. He has won five Champions Leagues and three La Liga titles and has racked up more than 330 appearances since signing for the Spanish giants in 2013. All of that will be an afterthought for Ten Hag, though, as it’s his defensive capabilities which will appeal most to the United boss.

Following back-to-back losses, Manchester United have been pretty active in the closing weeks of the summer 2022 transfer window to bolster their squad, with Antony from Ajax next on their radar. Casemiro is the type of player who puts the team’s needs first. He is more concerned with the defensive side of things, which is exactly what Manchester United need right now.

The Brazil international is largely considered to be one of the best defensive midfielders on the planet and still had three years left on his Real Madrid contract. However, Los Blancos signed Casemiro’s potential long-term successor, Aurelien Tchouameni, for £80million earlier in the summer. FootTheBall rate the Red Devils’ new signing and whether Casemiro will be a hit or miss at Old Trafford.

Defensive midfielders aren’t usually praised for their efforts. When their team needs them, they have to do the dirty work. Casemiro exhibits this behaviour by posing challenges to the team and accepting cards. His adrenaline sometimes gets the best of him, and he makes hasty tackles.

In fact, the way he meticulously examines his opponents has helped him become an expert at anticipating opponents’ movements and positions, allowing him to win the ball. Casemiro not only has a strong aerial presence, but he is also expected to join the defensive line when the ball travels wide in order to overload the defensive penalty area and clear out any threat.

He commits fouls very skillfully and rarely gets booked as a result. In defence, the Brazilian serves as a defensive barrier for Los Blancos. When he has the ball, he can drop deep to form a back three. He is a hard-tackling midfielder who is intelligent, physically strong, and aggressive. He anchors the midfield, blocking up countless attacks while also launching his own. He is a destroyer in the middle because of his positioning and ability to understand the game.

Aside from his defensive abilities, he also has a strong shot and occasionally makes bursting forward runs. He’s a shrewd defender who can score a goal or two on occasion. He is also a master game reader, he can occasionally fade in possession, but when he does, he rotates the ball, passes it, and most crucially, he does not give the ball away; instead, he shields the ball and is fouled.

Despite being in the latter stages of his prime, Casemiro is extremely mobile and strong, both of which make him a master at sweeping up balls in the middle and breaking up opposition attacks.

With the addition of Casemiro, this problem seems to be solved. In terms of proper defensive midfielders, there are few players better in the world than the Brazilian. Last season, he averaged 2 blocks, 2 interceptions and 3 successful tackles per game which puts him among the elite level of midfielders in Europe’s top five leagues. In fact, he also averaged 65 passes per game at a pass accuracy rate of 86%. This is an aspect of the game that Manchester United sorely lacked in the midfield.
Now Manchester United can play an advanced midfielder alongside Casemiro, and allow him the freedom to run forward and join the attack and play at a more advanced position. While Christian Eriksen who was signed on a free this summer might be the best suited to that role, the more unique approach would be to play Fred in that position, given the chemistry that he and Casemiro share for the Brazil national team.

Last season, only seven players across La Liga made more tackles and interceptions than Casemiro (149), which is pretty impressive when you consider he plays for a Madrid side that dominates the ball and therefore defend a lot less than other league rivals. Not only is he strong across the ground, but also in the air. No player actually won more aerial duels for Madrid last season than Casemiro (112).

From playing alongside Kroos & Modrić to teaming up with Fred & McTominay is a challenge indeed 😅#Transfers #MUFC pic.twitter.com/fi7V1i13tF

It was not his role at Madrid to orchestrate build-up play in the same way Toni Kroos and Luka Modric did, yet when there are opportunities to play penetrating balls forward, he’ll definitely take them. That’s a point captured by the fact only five La Liga midfielders who played over 1000 minutes could better his progressive pass per 90 average last season (8.51).

There’s no doubt he’s got the sort of ‘destroyer’ profile that United lack in their partnership of Scott McTominay and Fred. Casemiro’s ability to protect the defence could have a transformative impact on the Red Devils’ fortunes this season.

Jumping from Frenkie De Jong to Adrien Rabiot to Casemiro has to be a concern. There is no plan here, just a panicky jump from target to target, all of wildly different styles and profiles and ages. Yet it’s another very expensive sticking plaster over deep wounds. It might get United through the next year or two, but after that, they are back where they started.

Manchester City signed Fernandinho at 29, Liverpool signed Thiago at 28. There’s no reason why signing a player of Casemiro’s age is inherently wrong. But only if it fits into some sort of identifiable strategy. This does not.

It might be that Casemiro does still have three or four great years in him and United can reap the benefit. But it all looks like a high-stakes, high-risk gamble and even if it does pay off United will have essentially just pulled a Homer.

It’s good that they’ve finally realised a defensive midfielder might be needed, but outrageous that it has taken this long. In a summer where Spurs have signed Yves Bissouma for £25m, United’s dawdling and lack of direction is tantamount to negligence. Now even when they are getting it right, it still comes at a heavy price.

There’s absolutely no doubt Casemiro would massively improve United’s midfield. However, drawbacks come when considering both his age and potential cost. He cost an expensive fee up front and his wages are high too.

He’s worth the outlay at this stage, but an eye-watering pay packet could turn into a problem if his form was to dramatically decline over the next few years, leaving United stuck with another ageing star running down their contract.