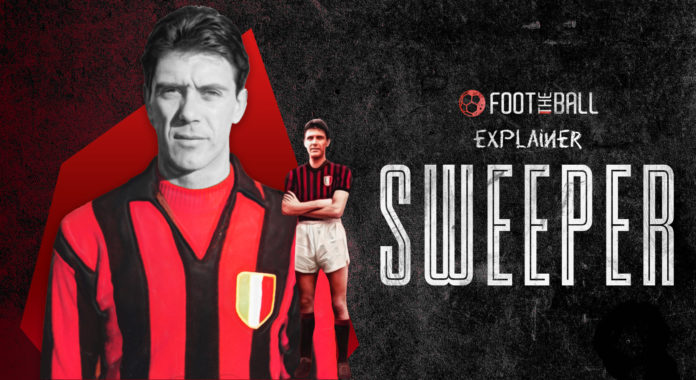 Football, like every other thing, goes through massive changes. As a sport that has been the most famous for the last 100 years, football has undergone many changes. Tactics, training methods, diets, and positions have dramatically changed. So, a tactic, system or position that was the most trendsetter in football during a period is now extinct. Unfortunately, these fell to the law of ‘Nothing is permanent but change’, and the sweeper role is one of those that couldn’t survive modern football.

The role rose to prominence in the 1930s and was extensively used for the next 50 years. These positions have produced some of the most known players in the game. And though the sweeper might have vanished from the game now, its imprint is still present in the game. It can be argued that the modern defensive tactics owe their rise due to the sweepers.

So, what is a ‘Sweeper’ position and how integral was it during its peak?

What is a Sweeper?

The Sweeper position is closely related to the Libero, a similar position with one significant difference. While the sweeper is only involved with defensive duties, a libero has the added responsibility of bringing out the ball and offering creativity in the attack. The sweeper is the original no-nonsense defender whose main job is to keep the ball away from his goal.

The origin of the role can be traced to Austrian manager Karl Rappa, who first deployed the sweeper Servette. Since his team did not have the players to compete with the top professional teams, Rappan developed a plan to beat them tactically. He deployed wingers who would drift to the inside called Mezzala and support them with attacking wingbacks. And only a single defender that would be at the back was the sweeper, whose job was to sweep the backline, ensuring the ball did not get past him.

Milan played their 1-3-3-3 formation with Cesare Maldini as the sweeper while Benifica played their 2-3-2-3 with the famous Eusebio who was regarded as the second best player in the world after Pele. pic.twitter.com/hlKdXBEs7g

This would slowly become more famous, especially in Italian football, where it would be deployed in the favourite Catenaccio system. The sweeper would be integral to Italian football for nearly five decades.

The first Italian to successfully implement the Sweeper and the Catenaccio was Gippo Viani, then coach of Salernitana. He would then manage Lucchese, Palermo, Roma, and Bologna before arriving in Milan.

Here he would deploy Cesare Maldini, father of Paolo Maldini, as the sweeper winning two Serie A. His successor Nereo Rocco would keep the system alive, bringing two Serie A and European Cup titles.

The role of a sweeper

The role of the sweeper was to be the last line of defence. It was not a flashy role and required the player to be a rugged tackling defender and have a keen vision. A sweeper should be able to foresee the opposition’s play and shift his position accordingly. However, even the sweeper position had a mini-Renaissance. And it was all because of Franz Beckenbauer.

The German was deployed as a sweeper in Bayern Munich and the German national team. However, he was not content with just performing defensive duties. His brilliant skills on the ball, passing and vision led him to venture forward, and thus the Libero was created.

The two roles are very similar. However, while the Libero may be tasked with additional offensive duties, it depends more on the system a team is playing, which decides whether a player is a sweeper or Libero.

Rocco was more of a traditional believer of Catenaccio. Cesare Maldini, a native of triestine himself was the sweeper of the team and Gianni Rivera was the creative force. They were the leaders of the pitch pic.twitter.com/F3TrnhE3WL

We can also say that even today, the back three formation employs a player whose role is similar to the sweeper. However, with the rise of systems such as tiki-taka which encourages ball-playing defenders or Gegenpressing, which demands defenders to be a part of the pressing in high areas, the sweeper is a liability in the modern game.

While the sweeper position might be extinct in modern football, its imprint can still be seen in the modern game. For example, Serie A continues to deploy a three-person backline whose defenders are perhaps the closest thing one can find to the original sweeper.

However, the emergence of ball-playing defenders, flying fullbacks, inverted fullbacks and regista now require players to be muli-faceted. A sweeper cannot survive in such a system.

Franco Baresi and Gaetano Scirea were some of the players who played as sweepers and Libero throughout their careers. However, the actual emergence of the sweeper is now a distant dream. Even the playmaker position and the Trequartista have become obsolete in the modern game.