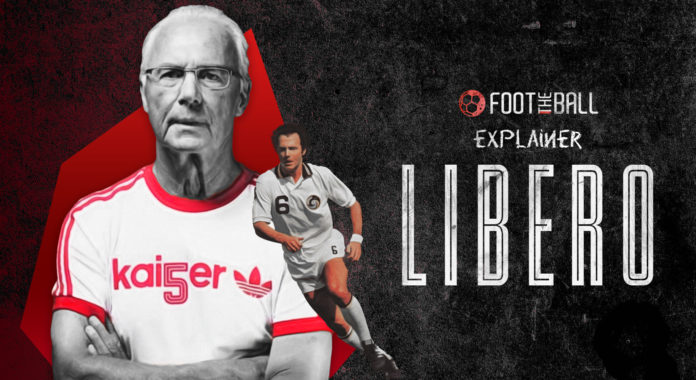 Go back 30 or 40 years and watch teams defend. It was a majestic sight. Most of them will feature a type of player that seems to have been lost from the modern game. You’ll see an elegant defender sitting behind the defensive line, picking up stray through balls from an attacker.

As he effortlessly brings it under his control, he marches forward with it, stepping past the other defenders and moving into the midfield zone. From there he acts as a modern-day deep-lying playmaker, initiating the play and spreading it out to the flanks, or playing it forward into midfield or attack. This is the Libero.

The role became synonymous with legendary former FC Bayern Munich captain, Franz Beckenbauer. The 1974 FIFA World Cup winner demanded the freedom of a creative playmaker. During the 1996 European Championships, another German, in this case Matthias Sammer, played slightly deeper than the other defenders in order to intercept passes closer to goal, and to break forward into midfield when necessary.

Franz Beckenbauer influenced the next generation of brilliant Libero’s, most notably legendary AC Milan stalwart Franco Baresi, who under the guidance of outstanding tactician Arrigo Sacchi, helped form one of football’s most extraordinary backlines.

🔝 Most Ballon d'Or Nominations of All Time;

What is a Libero?

Libero means ‘free’ and describes exactly what sort of defender plays in the role. A libero is a defender who plays behind the rest of the back line, and is responsible for covering and sweeping across the spaces behind other defenders. The role grew to include passing forward after a regain and often launching a counter-attack, eventually driving into midfield with the ball, or running forward off the ball to instigate an attack.

A revolutionary role within football, the Libero, is a player typically deployed at the heart of a conventional back five, sitting slightly deeper than the two central defenders. The archetype example is Franz Beckenbauer, who was deployed in the Libero role during the 1974 FIFA World Cup final, against the Netherlands – performers of the revolutionary “total football”. Beckenbauer displayed qualities similar to that of a creative midfielder.

One of the main aspects required of a Libero in an attacking sense is composure with and without possession. This is due to the Libero offering security in defence, as well as being expected to start attacks when in possession. Expert reading of the game is a necessity, enabling the player to intercept passes and through balls which pass the full-backs and centre-backs.

Role of a Libero

Initially, the libero was only seen as extra defensive cover for the defence, in a position to provide clearances away from goal. However, as the role developed, it started to include dribbles into midfield and intelligent forward passing into the feet of attacking teammates. These dribbles into midfield – now common among modern centre-backs are used to break the first line of an opponent’s press, overload the centre of midfield, or lure opponents towards the ball to free up teammates ahead of the ball.

A friendly reminder that in 196 matches together, Paolo Maldini and Franco Baresi conceded just 29 goals pic.twitter.com/nIsD2T4fiV

So, why can’t a libero be used in modern football?

Others have argued that the rapid increase in the aggression of pressing would mean that the libero simply didn’t have the time to pick out passes in the way Franz Beckenbauer or Franco Baresi did. However, this question is nonsensical, as it would imply that any role that requires time on the ball would become extinct as a result of pressing.

The playmaker hasn’t become extinct; it has simply required players to become smarter and faster when in possession of the ball. Instead of picking up the ball and looking for a pass, playmakers are now required to look for the pass before they receive the ball, meaning that they can avoid wasting precious time upon receiving the ball. Much like the playmaker, the libero would simply need to become faster mentally in order to adapt to the rigours of the modern game.

Liberos are not used in the modern game as they were used long back, as their deep positioning isn’t suited to the offside rule or the widespread use of three forwards. As a result, the best examples of the libero did not play their football this century.

There is an argument, quite rightly, that liberos still exist, but that we now call them ‘ball-playing defenders’. However, to liken them to ball-playing defenders is to forget the true artistry of the libero. Perhaps it is part of the development of football in general.

Even with the emergence of 3-at-the-back systems under managers like Antonio Conte in recent years, it seems that the actual position of the libero isn’t going to appear for another while thanks to the modern development of deep-lying playmakers.