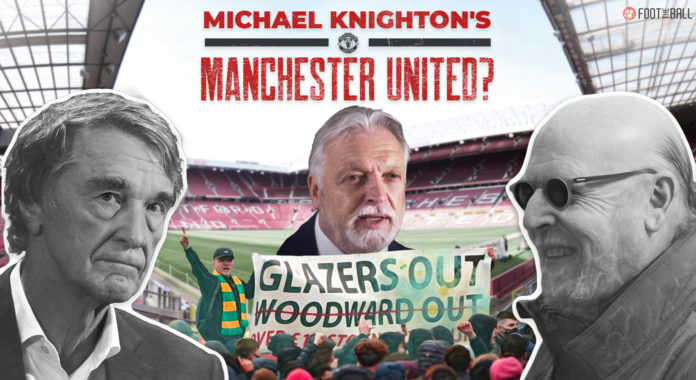 Glazers out! It has become a rallying cry for Manchester United fans as the Red Devils‘ season keeps getting worse and worse. The opening match saw them lose 2-1 to Brighton at Old Trafford. However, their next game was even worse as they conceded four goals inside 35 minutes. While there are several problems at the club, the Glazers are at the forefront of the accusations from the fans. Under the owners, the club has seen a massive decline, and now reports emerge that English businessman Michael Knighton might buy the club. United signed PSV’s Tyrell Malacia, Ajax’s Lisandro Martinez and Brentford’s Christian Eriksen in the summer transfer window. However, several of their top transfer targets have continued to elude them.

Michael Knighton is currently in the process of making a hostile bid to take over the club. In an interview released on YouTube, Knighton said,” “Everyone knows that we need new ownership in this football club. That is my aim, those are objectives. We’re now working on the offer document. Remember it’s a hostile bid which means the club isn’t for sale.”

Knighton continued by stating that he would present the Glazers with a ‘legitimate, potent and proper commercial offer’. But, who is Michael Knighton? And, is he the person who could do what John Henry did at Liverpool?

Who is Michael Knighton?

Michael Knighton was born in Derbyshire in 1951. His initial dream was to become a footballer and follow in the footsteps of his great grandfather Willie Layton, a full-back who won two league titles and one FA Cup with Sheffield Wednesday. His youth career was spent at Derbyshire, Everton and Coventry City before a thigh injury ended his footballing dreams.

During his college education, Knighton studied physical education at Bede College, Durham University. He would later return to St Cuthbert’s College, Durham. There he would learn Mandarin, philosophy, and politics.

While he spent a few years as a teacher and principal of a school, he retired in 1984 to become a full-time businessman.

And five years later, he would have his first encounter with Manchester United.

Five years after venturing full-time into business, Michael Knighton first came into the limelight. In 1989, Knighton announced his intention to buy Manchester United. The businessman made a £20 million offer which was also accepted by the club’s executive Martin Edwards. Michael Knighton was so assured of his proposal that he introduced himself to the fans at Old Trafford.

Dressed in the club’s jersey, Knighton displayed his ball skills in front of an ecstatic home crowd. He was even pictured with Alex Ferguson. However, in late September, two of his most essential investors backed out of the deal. While he managed to bring in other investors, he dropped his takeover bid in exchange for a seat on the club’s board.

He would later buy another club, Carlisle United, which would go under administration in 2002. This has been Knighton’s last involvement in football. So, while younger fans may not know who Michael Knighton is, the older ones do.

Will things improve at Manchester United under Michael Knighton? Well, the current circumstances would make anyone immediately say yes. However, under new ownership, things could not go wrong than they already are. In addition, Knighton is not only a businessman but also a supporter of the club and knows the club inside and out.

Knighton would also be more involved in the club than the introverted and receptive Glazers. In addition, under the current owners, the club appears to have become too economically driven. While money is paramount to any top club, it seems United’s every move is dictated by commercial interests.

However, Michael Knighton is no magician himself. His last stint as a club owner saw the club go into administration. Knighton is infamous for sacking the Carlisle United manager after taking over and installing himself as the manager. However. Knighton has made clear that his purpose is not to run Manchester United. He wants to rid the club of the Glazers and then sell it to interested parties.

Also, several deficiencies were hidden due to Alex Ferguson’s incredible reign at Manchester United. However, since his retirement, the club’s decline has never stopped.

Whether Knighton will be the man to stop it remains to be seen. However, it is also to be noted that Glazers have never admitted to selling the club, as despite the chaos on the field, the club remains a cash cow off the field. And it would take an incredible offer much like that of Todd Boehly for Chelsea to make the Glazers’ even consider the possibility.

The Glazers era began in 2005 when they completed the club’s takeover. And the start of their reign could not have gotten off to a worse start. After their takeover, several club supporters would leave the club to form a new club, FC United of Manchester. However, with Ferguson still in charge, trophies continued to arrive at Old Trafford.

The actual decline began after his retirement. Ferguson’s successor David Moyes was sacked before the end of the season. Loui van Gaal replaced him, whose defensive style got him the sack.

Every detail of the Glazer ownership of #mufc below.

Next came the Special One, Jose Mourinho, who led a mini-resurgence as United won the Europa League, EFL Cup, and Community Shield. However, Mourinho would have his third-year chaos at the club, losing the dressing room and was shunted out of the club mid-season.

He was followed by former United player Ole Gunnar Solskjaer, who, despite having his high moments, would fail like all those before him. For the remainder of the season, the club brought in Ralf Rangnick who would struggle to implement his ideas before appointing Erik Ten Hag. While there were some who were opposed to his appointment, the fact is that he is now the man tasked with turning around the club

While it is too early to tell whether the Glazers will relinquish their ownership, one thing is clear: the pressure is too much to do now. Earlier in the season, club CEO Richard Arnold met fans to assure them the club was doing everything to bring top players to the club. It is safe to say he won’t have another meeting soon.