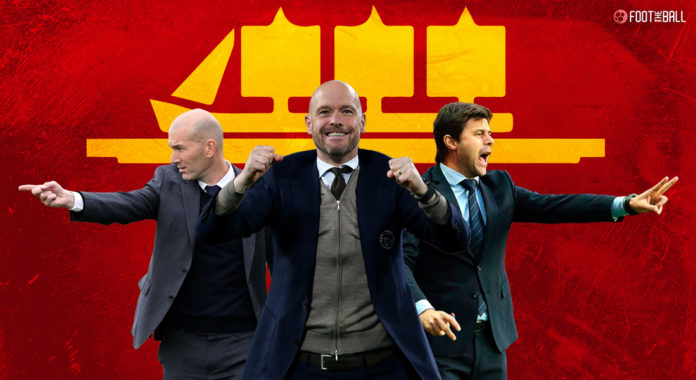 Erik ten Hag to Manchester United. The thought alone was so exciting for fans and pundits alike. The reality, well, has been quite different. After a fruitful pre-season, where patterns of play emerged and good results followed, Manchester United have been hit by a reality check. Be it the tactical masterclass by Brighton’s Graham Potter or the collapse at Brentford, United have looked inept, out of ideas and devoid of confidence.

Ten Hag, for his part, has taken responsibility and the fans are firmly behind him. This is, after all, a manager who won it all with Ajax and gave a scare to true giants of football with a young team. However, another manager who did the same, then proceeded to get sacked within 4 games in the PL was Frank de Boer. He endured a torrid time at Crystal Palace as his side failed to win or score in the first four games of the PL. The transition was never going to be easy for Erik ten Hag. The opening results have only magnified the situation.

FootTheBall highlights five key constraints for ten Hag now he has taken over at Old Trafford.

One of the key areas his rival for the position, Pochettino, is well-known for. During his time with Spurs, Pochettino was revered for bringing out the best in Harry Kane, Dele Alli, Eric Dier, and others. Erik ten Hag is more concerned with the overall play of the team. He sees the whole squad as a whole and though there is room for player improvement, nearly not as much as Pochettino. First signs have already emerged as Cristiano Ronaldo seeks a transfer away with no end in sight.

The personal touch is something the Red Devils desperately need for their players. Marcus Rashford is having the most difficult spell of his young career, so is Jadon Sancho.

Anthony Elanga is still raw and needs development. Harry Maguire’s confidence looks shattered. Ten Hag can get the team overall in a sense but the individual players need more than wins and points.

Also read: Who is Toby Collyer, the young midfielder signed by Manchester United?

Having only managed in his home country, apart from a couple of years with Bayern Munich, Erik ten Hag is a gamble in this sense. The Premier League is often considered the hardest in Europe, given the fantastic work rate and standard of play.

Crystal Palace's attacking stats in 4 PL games under Frank De Boer – they feature in the top half in a number of categories pic.twitter.com/AB4mnGLmla

Several foreign managers over the years have struggled to get up to speed quickly. Frank de Boer famously lost all seven of his matches with Crystal Palace before he was fired.

Moreover, the competition has increased a lot in recent years which means United will have to work hard to compete. The patience at the club often runs thin so supporters will want to see quick results positively. This is a league that gave Pep Guardiola a rude awakening before he adjusted. Erik ten Hag should do the same. Otherwise, he’ll follow Frank de Boer instead of Pep Guardiola.

In England, handling the media has to be one of the top three criteria for a new manager. The press coverage is intense and the questions are a barrage. Any manager in the league has to be extremely efficient in handling this. However, Erik ten Hag has not been a shining example in this regard. He has been described as a quiet fellow who is not too confrontational.

✅ A number of United players are excited by the prospect of being coached by Ten Hag and feel he would improve them, but sources close to other players say Ten Hag is viewed as an 'underwhelming' choice by some of them. @ManUtdMEN #MUFC 🔴🚨

On the other hand, managers who are managing currently have gained a wealth of experience over the years. Ten Hag can get flustered and even run out of answers as the season goes on, with the scrutiny getting harsher and harsher. His interview after Brentford shellacked his side 4-0 didn’t do anything to quieten this criticism.

Like Ole Gunnar Solskjaer, ten Hag is not too proactive in reaction to in-game situations. He has mostly kept his first 11 fixed throughout the season and in the Eredivisie, that is usually enough if you are Ajax. However, he will have to change his ways at United. Solskjaer struggled in making substitutions and often acted too late to salvage the game.

Ten Hag has let the same players on the pitch try and overturn results, which cannot be too successful in the Premier League. Furthermore, Manchester United do not have too many great players they could bring off the bench.

Ten Hag will need to bring in a lot of players if he is to manage a full season along with a winter World Cup. Lisandro Martinez’s playing style is already being questioned, Eriksen looks to be on a different wavelength and Malacia is not someone who can turn the team around through sheer talent and force of personality. United need to do more, and quickly.

Ten Hag has always had a solid boardroom structure behind him. Bayern Munich is one of the most professionally-run clubs in world football. Ajax has Edwin Van der Sar and until recently, Marc Overmars. This kind of support and cohesion helps the manager is doing his job to the best of his abilities. At United, there is very little cohesion in anything.

Darren Fletcher can be found shouting at referees. Richard Arnold says he is not involved in transfers then gets pictured with John Murtough to seal Frenkie de Jong’s transfer. John Murtough, hired for the youth academy under David Moyes, has been handed the keys to United’s transfer war chest without any training or prior experience.

Scattergun’s approach to recruitment has seen the likes of Rabiot, Arnautovic and Morata targeted. Erik ten Hag must have had a wake-up call when he came into the club and saw its scouting structure. “A coach cannot perform magic”, were the words of Erik ten Hag when he took over. Going by the structural issues at the club, that is precisely what he will have to do to salvage something from this team.