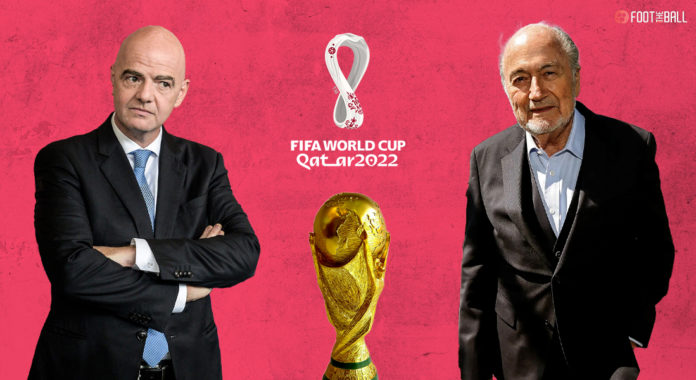 The FIFA World Cup Qatar 2022 is historic for many reasons, good and bad. It is the first to be hosted in the Middle East after FIFA had pledged to hold one before 2030. That has been overshadowed by Qatar’s dismal record of human rights abuses and deaths of migrant workers deaths. However, no nation has openly come out to boycott the World Cup as of yet.

The #FIFAWorldCup groups are set 🤩

Now that the draw is done, each team knows their opponents and how to go about it. The mega tournament kicks off on November 21 and runs till December 18. Yes, that is correct. The 2022 World Cup will be held in the Northern hemisphere’s winter. But why is that the case for the first time in FIFA’s history?

Why FIFA World Cup 2022 is in winter this time?

To be clear, it is only winter for the European and Asian nations. If Australia and/or New Zealand were to qualify, they would be coming from the summertime. Now, the decision as to why the World Cup this time is being played in the winter has two answers.

Also read: The early predictions for each group at the World Cup

Firstly, the decision to award Qatar the hosting rights over Japan, South Korea, Australia, and the USA was met with fierce criticism right from the off.

In the years since the vote in 2010, there have been several allegations of corruption and bribery surrounding Qatar’s bid. Several FIFA executives have been banned and jailed including Sepp Blatter, Michel Platini, Jack Warner, Chuck Blazer, and others. However, the bid stood, and the focus immediately turned to Qatar’s geography. The nation will be the smallest to ever hold the World Cup but that was not the main cause of worry.

Hansi Flick has spoken out about the World Cup in Qatar. pic.twitter.com/blYC6W9TM6

The temperatures in Qatar during June and July, when the World Cup is usually hosted, are nightmarish to play football. Qatar has recorded temperatures ranging from 95-100+°F. That is around 35-42°C, conditions in which any kind of outdoor sport over a long period is physically dangerous.

Players can suffer from dehydration, vision loss, losing fainting, and other such problems. That is why FIFA decided to keep the World Cup in winter when temperatures fall to 70-75°F or 20-25°C.

How is this World Cup different from others?

Apart from the schedule of the World Cup, a few more things are also different. All eight stadiums which will host matches are within 50km of Doha. They are all also fitted with air-conditioning system and are open-air. That means every team can spend the entire tournament in one hotel, without the need for frequent relocating. The tournament is also the shortest ever, taking just 28 days from start to finish.

A big reason why is because there will be four matches at the group stage every day. The final in December also coincides with Qatar National Day. Moreover, this is the last World Cup with 32 teams as the event is being expanded to 48 from 2026. Aside from all the off-field issues, the tournament is shaping up to be a historic phenomenon for football and the world.

How have the teams reacted?

As mentioned above, there have been no open calls for a boycott as of yet. That looks even more unlikely as the days tick down. However, some nations, including Norway and Germany, had drawn attention to the human rights record and workers’ deaths last year.

Norway taking to the pitch vs Turkey with a new t-shirt.

This time the slogan reads:

"HUMAN RIGHTS – on and off the pitch

With one arm raised. pic.twitter.com/NiQPjtbeYS

Moreover, the President of the Norwegian FA blasted FIFA’s decision to hand Qatar the hosting rights just a day before the draw. Speaking at the FIFA Congress, Lise Klaveness said,

“Human rights, equality, democracy: the core interests of football were not in the starting 11 until many years later. These basic rights were pressured onto the field as substitutes mainly by outside voices. FIFA has addressed these issues, but there is still a long way to go.”

The speech came a day after the global players union, FIFPro lambasted Qatar for poor conditions for workers. Needless to say, these issues will continue taking a substantial stage as the World Cup gets closer.