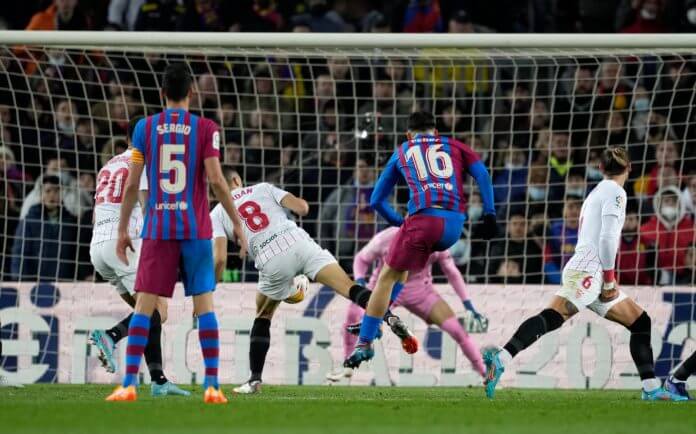 Barcelona beat Sevilla 1-0 at the Camp You on Sunday night thanks to Pedri’s second half strike as they jumped two places into second place in the Spanish La Liga table.

A tough one to take on a night where the team had many chances. pic.twitter.com/QqnLwb7lYz

The home side began the match in good form, picking up from where they had left off against Real Madrid two weeks ago. Their wide players, Ferran Torres and Ousmane Dembele, looked the most dangerous while Pedri and Frankie de Jong pulled the strings in midfield.

Torres was the first one to go close, firing a shot wide after cutting in from the left wing in the eighth minute. Dembele was the key man in the next chance, finding space out on the right wing before whipping in a good cross towards de Jong. The Dutch midfielder timed his late run into the box well but was unable to keep the header under control.

Barcelona continued to dominate possession but the Sevilla defence was compact and disciplined for the most part. Jordi Alba had a half-chance when Aubameyang’s pass to Pedri fell to him but the left-back’s volley was wild and off-target.

Julen Lopetegui’s side grew into the game with Anthony Martial becoming more involved. They enjoyed a good spell of possession after the hour mark but failed to create anything of note. In fact, it was Barcelona who finished the half strong with a flurry of chances in the last five minutes.

First it was Aubameyang who had a penalty shout waved away. The Gabon striker claimed to be pulled back by Jules Kounde but there was very little, if anything at all, in it. Kounde was again alert two minutes later. Pedri clipped a pass into the box towards Dembele, who had more time than he thought. The Frenchman decided to head it down across instead of going for goal and Torres missed his kick before Kounde intervened ahead of Aubameyang.

Aubameyang had the final chance of the half, Dembele again the creator – this time with a clever pass in-behind the defence. The angle though was against Aubameyang and his shot was well saved by Bono in the Sevilla goal. An entertaining half but the scoreboard remained untouched.

Sevilla began the second period with much more confidence, pushing Barcelona on to the back foot. Erik Lamela had a shot from the edge of the box saved by Marc Andre ter Stegen  within two minutes of the restart after a breakaway from Lucas Ocampos. The away side looked much more threatening on the counter, Jesus Navas playing a dangerous cross that was just a bit too high soon after.

The game opened up after the hour mark as Barcelona rose to Sevilla’s challenge. Ferran Torres had arguably the best chance of the game when Dembele’s cutback found him near the penalty spot. His first time shot however was a bit too close to Bono and the Sevilla keeper parried it over. Bono was again in action from the follow-up corner, tipping Araujo’s header over.

Torres had another chance a couple of minutes later, receiving the ball from the left flank from Alba this time. The Spaniard did not seem to have his shooting boots on, firing wide once more. Sevilla nearly took the lead in the 66th minute from Ivan Rakitic’s free kick but the Croatian just could not get the ball back down under the crossbar in time.

Barcelona continued their resurgence undeterred, Gerard Pique taking it upon himself to force a corner after a deflected long-range attempt. Pique then went as close as anyone had with his header that cannoned off the crossbar.

It took a moment of sheer brilliance from young Pedri to break the deadlock finally in the 72nd minute. Dembele was involved again, but the goal was all down to the ingenuity of the Spaniard. He took a good touch just outside the box, dummied twice before firing in an inch-perfect finish into the far bottom corner to give Barcelona the lead.

The Blaugrana nearly doubled their lead five minutes later, Torres getting on the end of a cross from the right but Bono was on hand to deny the winger once more with a good low save. Sevilla managed to rally and Lopetegui’s substitutions seemed to do the trick in turning the tide.

Pique brought down one of the substitutes, Gonzalo Montiel when the latter was bearing down on goal. Sevilla’s calls for a red card were waived away correctly by the referee with Araujo in a good position to cover for this more senior centre-back partner.

Ter Stegen nearly gifted Sevilla an equaliser in extra time, making a hash of Jesus Corona’s cross. The German goalkeeper palmed the ball straight into the path of Augustinsson but he recovered well to save the shot. Barcelona saw the game out professionally apart from that one little heart in mouth moment for a key win.

Here are our key takeaways from the match-

There has been a lot of speculation over Ousmane Dembele’s future over the last year or so but the parties seem to be heading towards a solution, and the right one in a contract extension. The Frenchman has enjoyed his best spell at Camp Now under Xavi and seems to be a manager favourite for the first time in Spain.

Dembele too is enjoying his football, as he showed with a scintillating display on Sunday evening. The Frenchman’s skillset of mazy two-footed dribbling is unparalleled in European football and he is adding the final product to his game as well. It is a joy to see the winner in full flight and one can only hope that the contract is finalised soon so we may enjoy much more of the same in coming years.

The young and the old

Barcelona’s squad construction is rather perplexing with a host of young prodigies complemented by very senior players in Pique, Busquets and Alves. The older players certainly have their role to play but it is clear that Xavi’s success lies in the youngsters. He should be looking at bringing some young blood in the summer with Alves & Pique struggling in the second half.

Their young players put on quite a show, and none so more than Pedri. The 19-year old has taken over the midfield from the likes of Busquets and he always seems to score important goals for the side. With Nico, Gavi, Dembele, Torres and Abde coming through, the future is looking bright for Barcelona.

Barcelona were hugely impressive and professional to get the three points but they were given a run for their money by Sevilla. The match reflected the renewed competitiveness of La Liga which can only bode well for next season and onwards.

The win meant that Barcelona went second, twelve points behind Real Madrid with a game in hand. This season’s title race might be a pipe dream but an improving Sevilla, resurgent Barcelona, Simeone’s Atletico and established Real Madrid makes the 2022-23 season look highly attractive already.