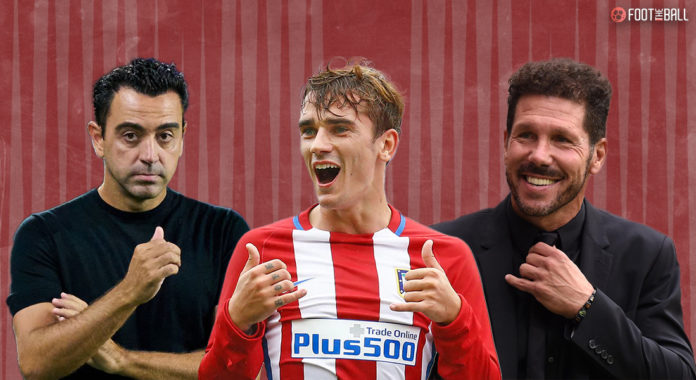 In the last few years, not many have had quite as whirlwind a career as Antoine Griezmann. From flirting with Manchester United, giving his transfer decisions in announced broadcast specials, to joining a financially broke Barcelona and then being loaned back to Atletico. Griezmann has seen it all. However, one thing he would not have seen coming in all this is taking place before our eyes. The infamous Griezmann contract clause, which is forcing manager Diego Simeone to play him for less than 30 minutes per game only.

We take a look at this Griezmann contract clause, what its ramifications are, and why the fight between Los Cules and Atletico turned ugly and legal. All this while the player suffers and is in limbo.

What is the Griezmann contract clause?

When Barcelona were desperate to trim their wage bill to sign players, they were willing to take financial hits in the short run to do so. This included the infamous turning of Barcelona’s economic levers off the pitch. On the pitch, they needed to offload high-earning players.

One of the biggest earners at the club was Antoine Griezmann. Furthermore, it was revealed that nearly all of Griezmann’s transfer fee was borrowed as loan by the previous administration at Barcelona.

Therefore, they had to quickly get out of this deal. Diego Simeone, being a huge fan of the player, snapped him up. However, it was not without a few conditions.

Griezmann joined Atletico on loan, with a view to making it permanent for 40 mil Euros. However, the Griezmann contract clause was not a mandatory purchase option. It was a conditional option. That means, there had to be certain conditions met for the clause to become compulsory to activate. Otherwise, Atletico could negotiate a lower fee than 40 million Euros. Therefore, what followed has become a running meme, as Atletico try to save money by skirting around the clause, avoiding starting games with Griezmann and only bringing him on after the 60th minute.

Meanwhile, Barcelona tried to threaten Atletico with legal action and called them out for being unsporting.

To trigger the mandatory option of purchase, it was written in the contract that Griezmann needed to play at least 45 minutes in 14 matches for Atletico.

Therefore, to avoid the mandatory option, Simeone has brought Griezmann on near the 60′ mark in nearly every Atletico game. The Madrid derby against Los Blancos was the Frenchman’s first start for Atletico this season.

For his part, Griezmann has been a true professional, contributing with important goals off the bench in his scattered appearances, a far cry from his struggles at Camp Nou.

However, the repeated pattern of substitutions had caught the eye of his parent club. Barcelona wanted to offload Griezmann on priority and Atletico were foiling that plan.

When asked about Atletico’s handling of Antoine Griezmann, president Enrique Cerezo denied any ulterior motives for using Griezmann as a super sub.

“Antoine Griezmann is a player of Atlético Madrid and we have coaches who play him when they think it is opportune, there is nothing more to it,” Cerezo told Movistar Plus television. “He is available for the time that our coach wants. For the beginning, the middle or the end.”

However, manager Diego Simeone seemed to hint at something more at work in this situation. When asked about the same, Simeone told the reporters, “I am a man of the club and always will be.” Was he perhaps hinting at the directives from above to use Griezmann this way? Barcelona thought so.

Barcelona threatened legal action since they believed the terms of the loan to be different. Barcelona believed that Griezmann needed to play more than 50% of games last season, when he played nearly 80% of Atletico’s games. On the other hand, Atletico are certain that that doesn’t trigger the clause, this season’s minutes do.

Barcelona manager Xavi said it in no uncertain terms already that they consider Griezmann to be an Atletico player and “there’s no debate” on this issue.

A protracted legal battle was set to ensue with both parties refusing to back down from their initial positions. However, as per the latest reports, it is believed that Atletico and Barcelona are locked in negotiations to lower the transfer fee to 25 million Euros. That could see the end of this ugly saga with both sides compromising somewhat. Griezmann starting against Real Madrid could mean that the saga is reaching a compromising end.

Meanwhile, Simeone has a battle on his hands to keep Griezmann motivated and happy.

“You have to try to convince them that playing 30 minutes well is more important than playing 60 minutes badly,” he said.

Griezmann has been nothing but professional throughout the whole ordeal.

“The situation is what it is. It is out of my hands. Of course, I want more (minutes), but I am going to give it my all in the minutes I have. I feel like I am a man of this club. I am happy here and I only want to play here and give this club all I can, both for ‘Cholo’ (Simeone) and our fans,” he said.