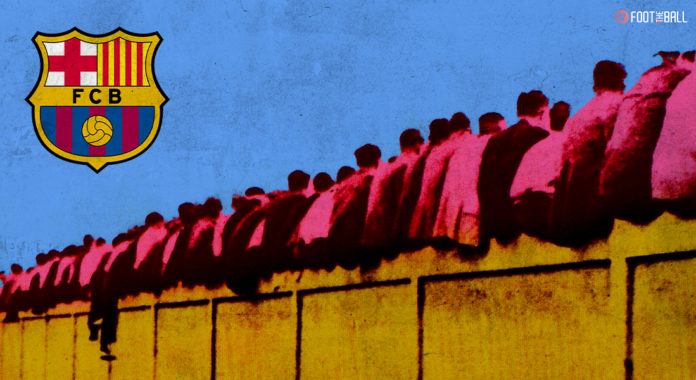 Barcelona are one of the grand old clubs in Spain and Europe since their founding in 1899. Having won the La Liga 26 times, the Copa del Rey 31 times (record) and the Champions League five times, the Catalans are a parcel of footballing nomenclature. Their home ground, Camp Nou, is the largest capacity stadium on the continent and has been a cathedral of the game ever since its opening in 1957.

The current financial difficulties might have dulled the shine somewhat, with Lionel Messi’s summer departure last season certainly a monumental shock. However, the fans and club have kept their faith, with Xavi’s arrival seeming to have sparked a youth revolution that needs to be managed smartly. The supporters have never wavered in wanting the best for the Blaugrana, and are affectionately called ‘cules’ or ‘culers’ which might seem odd to most onlookers.

Supporters should be called something that has some connection with the club’s name or its founder, then why such a different name? Well, the reasoning is wilder than anyone can expect.

Before Camp Nou opened, Barcelona were having to play their home games at a number of different stadiums. In 1909, they moved to the Camp de la Industria which had an initial capacity of 1,500 before expanding to 6,000 in 1916. It was opened during the presidency of Joan Gamper and with the club heavily in debt, required the help of local businessmen to fund the purchase of the ground.

On this day, on March 14th, 1909, @FCBarcelona opened up the doors to its very first stadium: "Camp de la Industria", better known as "La Escopidora".

The name “Culés”, originated from this stadium, bc of fans’ butts sticking out of the wall where they sat to watch the games. pic.twitter.com/Qq8UavCvWI

This is where the story gets interesting and exciting. Due to their successful seasons winning silverware, the stadium used to always get over-capacity crowds who would have to sit really close together on the walls adjacent to the pitch. When they did that, their butts would hang over the edge of the wall and when passersby walked, all they could see was a long line of butts all around the walls of the stadium. That led to the fans being christened ‘culers,’ derived from the Catalan word cul meaning “butt or arse” in English.

I found these pictures of the FCBBarcelona in front of the Hospital Clinic in 1912. Our story has long started, now we are closer than ever! @hospitalclinic & @BarcaInnoHub
Seeing our past, living this exciting present, can't wait to see what the future holds! pic.twitter.com/TRZL67GVQh

With time, they dropped the r and adopted ‘cules’ itself and it stuck, becoming wildly popular during that day and age. The fans loved this name so much, that they decided to make it their own despite its unique insinuation.

Barcelona moved to Camp de Les Corts in 1922, which had a capacity of 20,000 before being remodelled into a three-tier to accommodate 60,000. The two-tier was kept for the higher-ups and executives which meant that thousands of common spectators would have a hard time finding places in the top tier.

Les Corts was built as a result of a long-term plan by the club president, Joan Gamper, to provide FC Barcelona with its own stadium. It replaced the Camp de la Indústria as the home of FC Barcelona. It was inaugurated in 1922 pic.twitter.com/EoIX2SaZsl

This was when they brought back the ‘cules’ name for themselves, which became ingrained into the DNA of the supporters no matter where they went. Having moved to Camp Nou in the mid-20th Century, the ‘cules’ went worldwide with fans across countries adopting it proudly. The stadium, meanwhile, would also serve as the home ground of CD Condal till the club’s dissolution in 1970.

Even though their current stadium became one of the best in terms of luxury and amenities, fans never forgot their roots. The usage of cules nowadays is accepted as common parlance, showing up everywhere from banners to scarves to even tifos.

Barcelona have been one of the most successful clubs in terms of winning and having the best players including Johan Cruyff, Ronaldo, Romario, Neymar, Andres Iniesta, and of course, Messi himself. Though their on-field results have been improving and the heritage of the cules and how they were the first wave of supporters who could risk their lives and watch games will always be one of the cornerstones of their history.