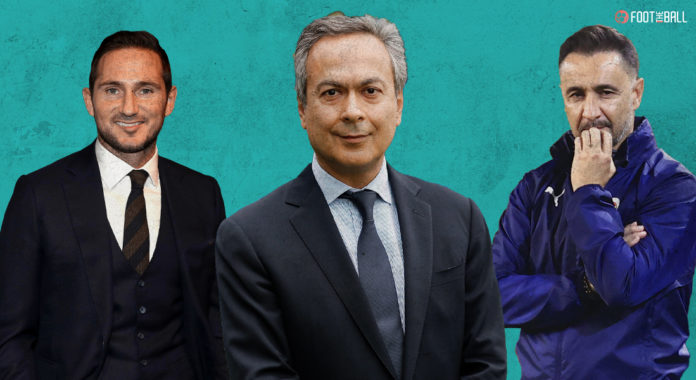 The famous adage of “one regular week of Barclays, that’s all we ask” looks more and more like a prophecy that will never be fulfilled. With the Premier League taking its winter break, hopes for a quiet period were quickly dashed. Never mind the flurry of activity in the transfer market as the deadline gets nearer, one club has been in a meltdown for quite some time now.

Steven Gerrard is a happy, happy man after leading Aston Villa to victory at Everton 🙌 pic.twitter.com/U9DN2htI4Z

Everton’s dismal performances after a promising start to the season cost Rafa Benitez his job last week. Not that the fans were too sad given the Spaniard’s links with Liverpool in the past. Duncan Ferguson, appointed as caretaker manager, oversaw the loss against Aston Villa managed by Reds great Steven Gerrard which could not have been nice. The most recent case of angst has come in the form of the permanent managerial search.

Fans are in open opposition to the board led by owner Farhad Moshiri, with one potential candidate Vitor Pereira being already told to not take the job. Even journalists on Twitter have gotten involved headily. So, why are supporters up in arms that they are even questioning the search for a new head coach?

NO FAITH IN BOARD

It has not been the best of times to be an Evertonian in recent years. Benitez was the fifth permanent manager appointed by Moshiri and co. and there have been some doozies in the list. Sam Allardyce only lasted 28 games and had a win percentage below 40. Carlo Ancelotti infamously left at the beginning of this season after just one year. To say Benitez was not popular would be an understatement, and even the early season positives dwindled away very fast. Vitor Pereira emerged as a surprising contender, and the arrival of another middling manager has infuriated fans.

🗣 "He's had more clubs than Tommy Fleetwood."@Tony_Scott11 from @ATNCAST podcast shares his views on Everton fans protesting the appointment of Vítor Pereira pic.twitter.com/PIrIlcwBN3

To be fair, Pereira has won silverware in Portugal and Greece which few others on the proposed shortlist have. However, the favourite of the supporters’ at the moment seems to be Frank Lampard. The former Chelsea and Derby County boss is touted as someone who knows the league, gives youth a chance and could improve the current crop of veterans further in a solid system.

Everton fans seem to be against the potential appointment of Vítor Pereira with many preferring Frank Lampard pic.twitter.com/IcgYOBcAot

Lampard, for his part, should be keen on proving his detractors wrong after he was sacked by the Blues halfway through his second season. He was initially linked with the Norwich job but could inherit a better squad with deep pockets to make more signings in the summer.

It got so intense that reputed media people also started aiming punches at each other. Adam Crafton of The Athletic questioned as to why Ole Gunnar Solskjaer was not being deemed a worthy candidate which sparked an intense Twitter debate. Jaco Steinberg of The Guardian fired back by asking how Lampard made Cobham graduates like Mason Mount, Callum Hudson-Odoi and Reece James. More jumped in including Jack Pitt-Brooke (The Athletic), Jamie Wilkinson, and Daniel Storey (The IPaper).

The fact that the supporters have little truth in Moshiri and his cronies is evident by the fact that even after investing hundreds of millions in revamping the team, he is not well liked. The boardroom decisions have often been awry and reactive, with no concrete plan for the future consolidation of the club. Though Lampard’s CV is not too impressive or experienced, the fact that he has been a decorated player who has plied his trade for years has given fans a sense of familiarity with their English candidate. Furthermore, bringing in an unknown manager by Everton’s standards will not sit well with the fans in these fractious times.

WHO ARE THE OTHER CONTENDERS?

Pereira is aware of the protests at his supposed hiring, taking to Sky Sports yesterday to clear out the air regarding how his interview with the board had gone. The move to discuss your supposed interview on air before any decision from the club itself bewildered onlookers who now feel Pereira is all but ruled out as an option. Even the Everton hierarchy are said to be displeased at Pereira taking such a public route which has done little to quell the anger of fans.

🗣 "It's the first time in my career I feel this type of thing, I have my CV and my CV speaks for itself. Their passion is the power of the club."

Everton managerial candidate Vítor Pereira on some negative reaction from the #EFC supporters about his potential appointment pic.twitter.com/nCntFBsKk7

Lampard will get a good look-in after his tenacious work with Derby and respectable results with Chelsea. Wayne Rooney, a diehard Evertonian, is also in the fray but looks unlikely to leave Derby right now after all the brilliant work he has done this season in trying to keep the Rams in the Championship. Graham Potter has already made his intentions clear of not joining while negotiations with Roberto Martinez of Belgium also not preferred by the supporters. Recently fired Watford boss Claudio Ranieri is a left-field option but looks unlikely as he has struggled to impress since leaving Leicester City.

From yesterday afternoon – Lampard set for further talks with Evertonhttps://t.co/9akVCjPMfJ

No matter who is appointed full-time, there is no doubt he will be having an uphill task of improving results quickly. The players look bereft of ideas and even new additions will have to wait till the next transfer window. Supporters will not go easy and the board has to be absolutely clear in its communication what they have thought of with in the near future.