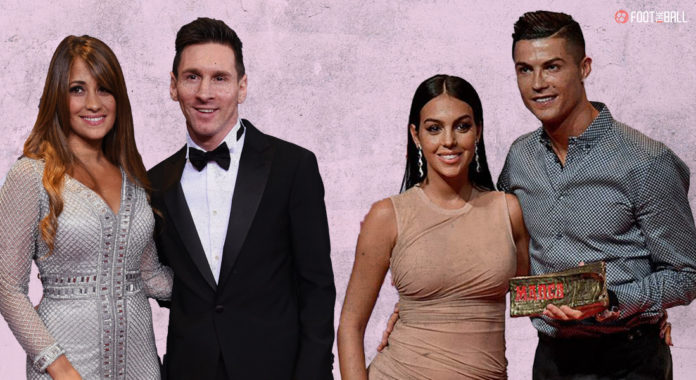 Football and mental health have a complicated yet very important connection. Players are expected to ignore the personal side of things and just work to help their teams win all the time. The old adage of “keeping the professional and personal separate” is not being espoused by many right now. Clubs are realising that making players feel comfortable in their personal space and helping them settle down, especially new transfers, is the key to longtime happier performances on the pitch.

In that regard, the importance of therapists, player liaison officers and psychologists have gotten renewed importance in this day and age. However, another key aspect in a player’s life that helps settle them down is their own families. Having them on your side when you are moving between teams helps to calm matters down in a much better manner. And no couples do it better than Antonella Roccuzzo with Lionel Messi along with Georgina Rodriguez with Cristiano Ronaldo.

THE FIRST LINE OF SUPPORT

The most immediate family matters a lot throughout a player’s stay at a club. Messi and Antonella Roccuzzo have been together since they were in school back in Argentina. Moving to Barcelona in 2004 was a huge challenge for both of them but neither gave up and now they have three children together.

They can be spotted everywhere together, most recently at the Ballon d’Or awards ceremony. An important moment of close their commitment was evident when Messi called back Antonella for a photograph after she had been told to step aside. They are a couple that has never had to worry about things going awry at home which in turn frees up his mind to focus completely on football.

Likewise, Ronaldo and Georgina Rodriguez have been together for more than five years now and just announced last year that they were pregnant again. Their posts on social media have been a good barometer of gauging how well the relationship has been going and it is always looking very happy.

CONGRATULATIONS: @Cristiano Ronaldo confirms that his girlfriend Georgina Rodriguez is pregnant with his fourth child. 👶🎉 pic.twitter.com/cl6qAkgbk2

Georgina has changed countries twice in four years now, and their children also seem to understand the decisions. Furthermore, like Antonella, she has also been by Ronaldo’s side through all the major moments of his career in the recent past. Furthermore, the Portuguese icon can also draw from the support of his mother who has been the most influential person in his life. Maria Dolores Aveiro has been with Ronaldo right from his Sporting days, having influence on his career decisions and future destinations. She has also been extremely vocal and public about her thoughts on several footballing matters.

Georgina and Antonella are two of the most recognizable spouses in the footballing world, given how their partners are the two best known players of this generation. Moreover, by all means they are also extremely in favour of their partners and their life trajectory through football. There hardly has been any stories of ill will in the press either which has helped calm matters immensely. Antonella, for her part, has cultivated a very approachable persona while Georgina has been not too involved but has made her presence felt equally.

Manchester United had little success with two of their number 7s in the recent past with Angel Di Maria and Memphis Depay both turning out to be less than underwhelming. However, Di Maria was said to never properly settle in England after there was a burglary at his home while he was away in October 2014. This is one of the most common dangers that players face every month. Mesut Ozil, Sead Kolasinac, Gabriel, Joao Cancelo are just some of the victims in recent years while Karim Benzema’s house was looted just this weekend.

🚨🚨 BREAKING: Karim Benzema’s house was robbed during the match against Elche today. The house was empty. Details of the robbers or the items stolen are unknown. @20m #rmlive 🏡 pic.twitter.com/c3OSJSTks1

They are an easy target given their status and obvious wealth but should clubs be doing more to improve the off-pitch conditions of their players? Mental health has to be a preorogative in these times, with more and more individuals falling out of love with the game. For example, Davy Propper of PSV became the latest to quit football at the age of 30 just this month.

Davy Pröpper is retiring aged just 30 after falling out of love with the game and the “hectic schedule.” His decision should serve as a reminder that players are human beings, not machines. Prioritising your health and happiness is the most important thing you can ever do ❤️ pic.twitter.com/AL3z1NdAO3

Results are important of course, but the mental stability provided by families cannot be overlooked. Georgina Rodriguez and Antonella Roccuzzo set the standards in being the backbone of their respective partners, while also being able to remain the most popular faces.