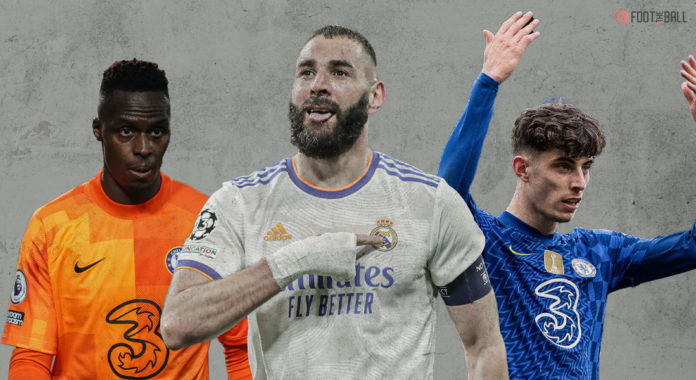 The match began on an entertaining note, with both sides open to attacking straight from kickoff. It was the home side that fired the first shot when Kai Havertz shot over from inside the box in the fifth minute.

The visitors though were not far behind. Vinicius Jr nearly opened the scoring in the tenth minute after an fast break from Madrid. Karim Benzema back heeled a pass into Fede Valverde’s path, who fed in Vinicius. The Brazilian’s shot was well struck but cannoned off the crossbar.

A few minutes later, Madrid had a scare at the back with Eder Militao closely avoiding a red card. Havertz pounced on a loose pass, and was brought down by the centre-back outside the box. The referee though was somewhat lenient, showing only a yellow card despite Militao potentially being the last man. Reece James drew a good save from the ensuing free-kick.

The match remained end-to-end, and Madrid took advantage to open the scoring in the 21st minute. Toni Kroos played the ball out wide to Vinicius who exchanged passes with Benzema to get in behind on the right wing. The Brazilian crossed towards the penalty spot where Benzema ran on to it to score an excellent header past Edouard Mendy.

Three minutes later, the French striker doubled his, and Madrid’s, tally. It was another great header that did it for Carlo Ancelotti’s side, this time from Luka Modric’s cross. The duo were instrumental in the win against PSG, and showed their class again at Stamford Bridge.

Madrid continued to dominate, Dani Carvajal and Militao going close. Chelsea persevered and managed to turn the tide in the last five minutes of the half. First Thiago Silva headed over from a Mason Mount corner and then, Havertz halved the deficit. James passed inside to Jorginho who clipped in a great pass for the German striker to score a header of his own.

Chelsea almost gave the two goal advantage straight back, a quick counter from Madrid leading to a great chance for Benzema but his shot from the right side of the box was just wide. Havertz had another chance but shot over and the sides headed in to half time separated by a goal.

The break did Madrid much more good as they came out sharper and restored their cushion within a minute. Edouard Mendy played a very poor pass to Antonio Rudiger and the German did not do himself any favours. Benzema pounced on the chance and passed into the empty net from 30 yards to complete his hattrick.

Chelsea tried to fight back and were almost effective in cutting the deficit back to one in the 50th minute. Carvajal blocked Havertz’s shot and the ball fell to Cesar Azpliciueta. The Chelsea captain lined up a shot destined for the top corner but Courtois intervened with a spectacular one-handed save.

Thomas Tuchel threw on Romelu Lukaku to add impetus to the attack and the Belgian really should have done so in the 69th minute. Azpilicueta’s cross looped up off Valverde and dropped kindly towards Lukaku at the edge of the six yard box. His header though was the worst of the night, failing to test Courtois when he should have been hitting the back of the net.

Mount had Courtois scrambling a minute later with a snap curling shot from distance as Chelsea continued to chip away. Havertz, arguably Chelsea’s best player, shot straight at Courtois from inside the box. Mount had a dangerous shot well blocked from a narrow angle on the left.

Courtois had to be alert again as Reece James tried his luck from distance with a low shot that had to be palmed away. Madrid contained the home side to half chances though, and saw out the game 3-1.

One Champions League hattrick is rare enough. Two in the same campaign had only been done by five players. Back to back hat tricks in the knockout stage had only been done once, by Cristiano Ronaldo. And it was his former teammate, Karim Benzema, that emulated the Portuguese on Wednesday night with a special performance.

The Frenchman has been in exceptional form this season, scoring 11 in 8 in the Champions League and 24 in 26 in La Liga, along with 11 assists. The fact that he has done this, at the age of 34, in a Madrid squad that is still a work-in-progress is astonishing. A couple more performances like this, and Benzema could become the early front-runner for the 2022 Ballon d’Or.

Despite Thomas Tuchel’s dedication to developing a working system for Chelsea, it was individual brilliance, or lack thereof, that decided the match. Benzema had a special performance and much of the Chelsea defence had a night to forget.

Silva, usually imperious, lost Benzema for the second goal. Rudiger did not look his usual robust self. Even Edouard Mendy, exceptionally consistent over the past year and a half, made a blunder for Madrid’s third. The match was a showcase of why the Champions League does not always reward the best ‘team’.

Madrid came away from England with a healthy two goal lead but they know that the tie is far from over. Chelsea showed dangerous signs when attacking and Ancelotti can rely on the genius of his players only so much. Fewer mistakes at the Bernabeu from Chelsea and they could very well turn this thing around.

Tuchel will however need his players to turn it up if they are to contain messrs Benzema, Modric & Co. Both sides have a week to get their tactics just right for the second leg.