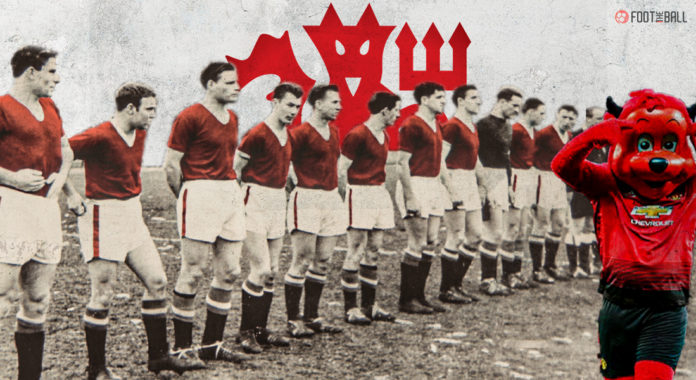 Manchester United are one of the most popular clubs in the world. Moreover, they have enjoyed tremendous success over the years and Old Trafford is a fortress. United were the first British team to win a traditional treble back in 1999. However, this journey had started long back. The Red Devils were winning silverware left and right ever since the days of the legendary manager Matt Busby.

Moreover, it was he who brought or rather, borrowed, the Red Devils nickname. Confused? FootTheBall explains how and why United came to be recognized by one of the most famous monikers in sports.

Busby was appointed as the first post-WWII manager of United. Though there were questions over his credentials, there was no doubting what he achieved immediately. United finished runners-up in four of the first six seasons with the new manager. Meanwhile, they had already won the FA Cup in 1948 too.

However, the most coveted silverware- the league title, came in 1952. It was United’s first league crown since 1911 and truly established as a club on the rise.

Nevertheless, the squad was an ageing one. Several players were past their prime and Busby knew he needed to find replacements. Instead of scourging for established stars around the league, Busby looked inwards. He promoted several youngsters from within the club structure itself. Amongst the many youthful talents were Duncan Edwards, Billy Whelan, David Pegg and others.

The team was given the nickname “Busby Babes,” given how so many of the players were just starting out. This name would soon lose its spark and come to become a harrowing reminder.

The tragedy and rebirth

February 6, 1958 would always remain the biggest turning point in United’s history. The Munich Air Disaster that claimed the lives of 23 people, including eight first-team players. Busby himself suffered multiple injuries and almost thought to have died in hospital on two occasions.

However, he was able to recover within three months and resume his duties as manager. The “Busby Babes” were irreparably impacted and the name now carried a haunting moniker of all that was lost. The youthfulness, innocence, and eagerness of the team was forever lost.

ON THIS DAY:
In 1969, Matt Busby retired from Manchester United. The 🏴󠁧󠁢󠁳󠁣󠁴󠁿 was the legendary coach who led the Red Devils to their first & historical European Champions Cup in ‘68, 10 years after the Munich air disaster in which most of his “Busby Babes” lost their lives pic.twitter.com/o5qk3YC87B

Busby had to turn to buy senior players in the market now. Denis Law, David Herd and others were joined by the survivors in Bobby Charlton, Harry Gregg and Bill Foulkes. That same year, the Red Devils would be born and it had a lot to do with the city of Salford.

Salford had a rugby club by the same name, locally called the Reds. However, they had earned the moniker of the “”Les Diables Rouges” in 1934. This was due to their performances in a French tournament back then, with the nickname getting stuck. Of course, it translated to “The Red Devils.”

Salford came to play at Old Trafford in late 1958, and Busby was inspired. The Red Devils name had a more “intimidating” that could really scare opponents. This was a marked change from the erstwhile softer tone of “Busby Babes.” Furthermore, this was also a kind of a nod to the time when the club was named Newton Heath.

The nickname back then was “The Heathens.” Busby and co. turned the fortunes of the club once again, as continental glory finally arrived.

European champions and Fred the Red

United won the European Cup in 1968, just 10 years on from the disaster, becoming the first English club to achieve the feat. In the 1970s, the club changed their crest to officially adopt the Red Devil logo. It shows an incarnation of the devil holding a trident, all coated in red.

Fred the Red is in the building! 😎#MUFC #EmiratesFACup pic.twitter.com/LoWakntbPn

United have kept on winning trophies as the years have gone by, with “The Red Devils” becoming a brand itself. Today, the club’s mascot is Fred the Red, who portrays a devil with horns who smiles a lot.